A newly invented fire extinguisher differs from the usual type in that after it has been inverted for use and it is desired to stop the flow of extinguishing liquid, it can be turned back to the normal position, without appreciable loss and used again as occasion may demand. This is accomplished by the use of a gravity actuated sliding valve mounted upon the end of a tube arranged to extend from the ordinary screw-down valve in the head or neck of the vessel to within any appropriate distance from the base of such vessel by which means the object desired is effected.

In the illustrations Fig. 1 is a sectional elevation showing the extinguisher in its vertical position with the valve open as when in use. Fig. 2 is a similar view to Fig. 1 but shows the vessel inverted with the outlet valve still open but with other devices for preventing the apparatus from acting unless brought hack to the desired position.

The free, inner end e of the tube d is in the form of a valve seating while the member f has a valve 6 at its lower end which when the vessel a is inverted (as shown by Fig. 2) will, by gravity, descend with the member f so as to fit upen or take over the seating 3 on the end of the tube d thus forming a joint to close the opening c through the tube d. By these means when the outer valve b of the vessel a is opened in order to bring the apparatus into use the internal pressure acts threugh the opening 7, 7a made through the walls of the sliding member f so as to force out the contents of the vessel a through the opening e in the tube d past the valve b to he discharged threugh the nozzle g, as desired.

After the user has opened the valve b to permit the actions described, provided by mistake or otherwise he inverts the vessel a, as shown by Fig. 2, then the sliding member f will bring the valve seating 6 against the seating 3 on the end of tube d and so entirely close the openings in it and the passage through the vessel a, thus the apparatus will cease to act until the user again turns it into proper position as shown by Fig. 1 in order that the member f may slide or descend to the position shown by Fig. 1 to enable the actions to recommence and this is effected without less (to any appreciable extent) of internal pressure.

Perth Amboy To Instal Electric Pumps—The water commission board at Perth Amboy, N. J., plans the electrification of its water pumping’ station at Runyon that is expected to involve an expenditure of about $45,000.

Mt. Ayr. Iowa, Plans Extensive Betterments—Engineer G. W. Hall of Centerville. Ia., has been engaged by Mt. Ayr, Iowa, a town of about 2,000 population, to prepare plans for 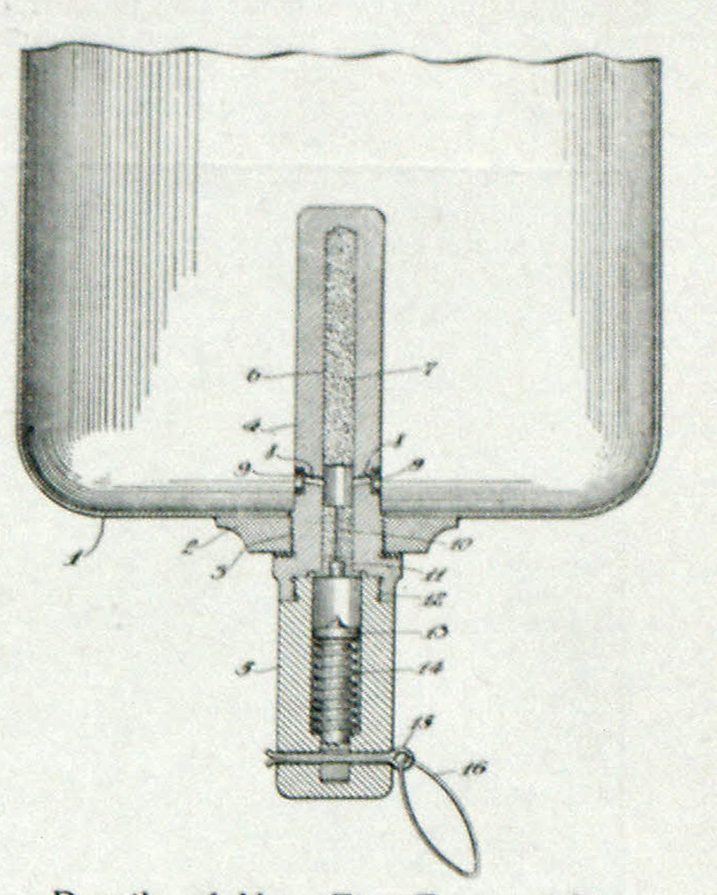 A new fire extinguisher has been invented with the object of overcoming disadvantages in the method of igniting the gas for projecting the brine front the container and to avoid the use of a large and otherwise cumbersome case attached to the outside of the brine container which is complicated and expensive to manufacture and reload and the premature operation of which is apt to occur whenever the extinguisher is turned upside down. In this invention there is provided a simple and compact expeller projecting into the brine container and having a safety igniting device housed in its exposed or outer part, the latter being just large enough to serve as an efficient handle for the extinguisher; the enclosed part of the expeller has a powder chamber and one or more blow ports extending through its wall adjacent the container wall; and the igniting device includes a sear-controlled spring-pressed firing pm adapted to ignite a primer and pellet in the mouth of the chamber and thereby ignite the main charge of powder in the chamber and blow the ports open. With these and other objects not specifically mentioned in view, the invention consists in certain constructions and combinations which will hereinafter be fully described and then specifically set forth in the claims hereunto appended.

In the accompanying illustration the figure is a central sectional view, paitly broken away, of an extinguisher constructed in accordance with the invention. 1 indicates a brine container of the usual type, hut provided with a reinforcing plate 2 braied or otherwise secured to its rear head. The plate 2 is provided with a central threaded aperture 3.

A two-part expeller 4 -5 is screwed into the threaded aperture 3. and projects into the brine container 1. The enclosed part 4 of the expeller is provided with a powder chamber 6 loaded with a tight charge of compressed meal powder 7. or other gas developer. Below this powder charge, a series of blow ports 8 extend through the expeller wall adjacent the container head. These ports are normally closed by means of a series of friction plugs 9 operating to keep the brine out of the expeller chamber. Just below the ports 8 and in the mouth of the chamber 6. is a black powder pellet 10; and just below the pellet is a primer 11.

The enclosed part 4 and the outer or exposed part 5 of the expeller are screwed together at 12. Housed within the part 5 is a firing pin 13 of a well known type. This pin is spring-pressed in the direction of the primer 11, the spring being marked 14. Normally, however, the spring is held under compression and the firing pin under restraint by means of a spring-cotter sear 15 which passes transversely through suitable holes drilled in the firing pin and in the expeller part 5. Attached to one end of the sear is a loop 16 of twine by means of which the sear may he withdrawn when it is desired to operate the extinguisher.

Withdrawal of the sear releases the firing pin and permits its spring to drive it against the primer which then ignites the pellet 10. The pellet, in turn, ignites the main charge 7 in the chamber 6 and simultaneously blows the friction plugs 9 out of the ports 8, thus permitting the gas developed by the main charge to blow through the ports into the container behind the brine and by its pressure expel the latter.

Thomasville, N. C., Lets Water Works Contracts —Contracts to the extent of $133,000 have been let for the construction of improved water works facilities at Thomasville, N. C. Improvements will include extension of $29,000 feet 12-inch, 1.900 feet 10-inch and 100 feet of 24-inch pipe. A new water basin with filtration equipment will also be installed.

THE WORK OF FIRE ENGINEERS.