Commissioner Waldo has issued a report giving a review of the year in the New York fire department. Its perusal shows that the commissioner has given a business administration and eliminated improper political influences from the force. In making promotions, he has advanced the men in numerical order, as certified by the civil service commission, and he has applied the same method to the appointment of firemen. In this way it did not require political pull for a worthy fireman to be promoted, or for a man to be appointed to the uniformed force of the department. As Chief Croker testified before the legislative investigating committee the other day, “the fire department at present is in the highest state of efficiency.” The growth of New York has necessitated twenty-seven new fire houses, which Commissioner Waldo has planned for the outlying sections and newly developed manufacturing districts in Manhattan and Brooklyn. In order to reduce the material cost of this wholesale number of buildings, a model plan of a fire house has been adopted, and the same materials are to be used in all buildings. The houses are to be of concrete and thoroughly fireproof throughout. This additional fire protection will he in service by July 1. Commissioner Waldo has saved $150,000 on repairs and supplies from the budget allowance, and another $125,000 goes to the city’s credit by his eliminating unnecessary positions. The board of estimate and apportionment raised fire department salaries as follows: 248 foremen from $2,100 to $2,500 per annum: 368 assistant foremen from $1,800 to $2,100 per annum, and 213 firemen from $800 to $1,000 per annum. This involved an additional expediture of $117,000 in the fire department, but Commissioner Waldo met this, without receiving any revenue bonds, from money he saved on repairs and supplies. The bureau of repairs and supplies of the fire department was organized by Commissioner Waldo. A strict accountability system is maintained, and open competition to all business men was invited. The commissioner has plans under way to put the fire department on a motor apparatus basis. One steam pumping, gasoline propelled automobile fire engine; two gasoline pumping and propelled engines, eight hose carts and several hook and ladders will soon run through the streets of New York without being drawn by horses. The motor apparatus affects a great saving in the cost ol maintenance. The high pressure automobile hose wagon now in the fire department costs for maintenance and fuel for one year less than $100.

The Fifty unnecessary sinecures were abolished by the commissioner in the civilian force, and as many uniformed firemen, who were doing clerical duty, were sent back to engine companies. During the year 1910, six new fire companies were formed in The Bronx, Brooklyn and Queens. With the men relieved of detail. Commissioner Waldo manned these houses, without any additional cost to the city. An item of importance is the purchase of bituminous coal at $5 per ton for the use of pumping engines, in place of imported cannel coal heretofore used, which cost the city $12 per ton. The commissioner has not asked tor any revenue bonds, or any money not called for in the budget during his first year of office, and leaves a balance to the credit of the city. The fire alarm telegraph bureau is being placed on a more efficient basis. Wires are being placed under ground in Brooklyn, and in the suburban districts keyless doors lor fire boxes are being installed as rapidly as possible in all boroughs. Commissioner Waldo is responsible also for the fire laws in 1,150 theatres and other places of public amusement during the past year, and no loss of life by fire has occurred in any of these places. Commissioner Waldo has recommended that the highpressure service be extended as rapidly as possible throughout the entire borough of Manhattan south of 155th street and in the business sections of Brooklyn and Long Island City. The number of fire alarms in 1910 was greater than m 1909. The average loss per fire has been reported as less by the fire marshal. Another feature in the fire department during this year will be the introduction of its own horseshoeing department The commissioner expects to save $50,000 on this innovation. A strict record of the hose purchased in the department has been established. Each length of hose has a number and in the centre of each length is vulcanized in red rubber the month and year of purchase. This eliminates trickery and rascality in the hose question. The record card of each hose shows when it was purchased, where the hose performed service, how long it has been in the department and the cost of its repairs. The long desired training arrangement for officers has been accomplished in organizing the fire college of the department. In this college men becoming firemen will receive a thorough instruction from men of vast experience in firefighting. Engineers will be given a thorough course of instruction in the care of boilers and pumping engines. Firemen eligible for promotion to officers and the under officers eligible for promotion to captains and battalian chiefs will also receive a practical education in the fire college, which is presided over by the oldest and most experienced firefighters in the world, thereby the knowledge of firefighting gained In officers of the department in years of fighting thousands of fires and their experiences will be preserved and the city benefited instead of dying with the individual. 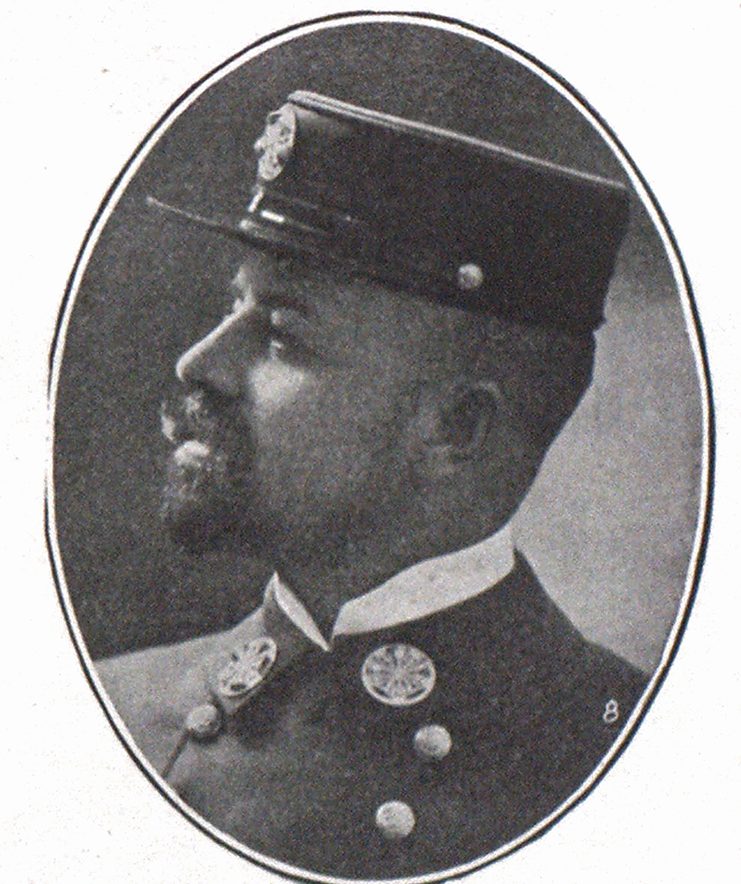 The Work Accomplished by it in Twelve Months.

During the year 1901 the fire department of New York, including the boroughs of Manhattan, the Bronx, and Richmond, received 3,319 alarms of fire— thirty-two more than in the previous year, with over $300,000 less insurance loss. Of these alarms 1,865 were first alarms; ninety-three, second; thirty-five, third; fourteen, fourth; 358, still; 590, verbal; eighty-five, special for companies; eight, special for insurance patrol; 271, for ambulances. From street boxes there were 1,660 alarms; from private signal boxes, forty-eight; from telephone, 299. Sixty-three additional fire alarm boxes were installed during the year—making a total of 1,293 boxes on thirty-two circuits as follows: Class 1, 801; class 2, 254; class 3, 216; class 4, twenty-two. There are now 932.0296 miles of electrical conductors in operation; 6.9227 miles of wire were used for extensions; 48.4217. for repairs; 4.2239 miles were removed. The department owns and uses 3,418 poles, including 1.336. the property of the department and the New York and New Jersey Telephone company; eighteen poles were removed: and seventy-nine, reset. Of messages 111,126 were received, and 118,361 were transmitted—a total of 229,487. The personnel is divided as follows: At Headquarters—Commissioner; secretary; assistant secretary; bookkeeper; purchasing agent; contract clerk; cashier; draughtsman and mapmaker; assistant stockeeper; engineer; medical officers, three; clerks, three; stokers, three; drivers, two; watchmen, etc., ten—total, thirty-four. Bureau of chief of department—Chief; deputy chiefs, three; chiefs of battalion, sixteen; chief instructor; chief of construction and repairs to apparatus; foremen (captains), 104; assistant foremen (lieutenants), 116; engineers of steamers, 168; firemen, 1464, as follows—first-grade, 632; second-grade, 121; thirdgrade, 132; fourth-grade, 128; probationary, fortyone. Non-uniformed force—Pilots, five; marine engineers, five; stokers, nineteen—total, twenty-nine; electrical force, four. Bureau of combustibles—inspector. etc., nineteen. Bureau of fire marshal—firemarshal, assistants, clerical force, etc., eleven. Fire alarm telegraph branch—chief operator, operators and assistant operators, eleven, clerks and technical workers—total, forty-three. Repair shops, foreman, machinists, etc., seventy-seven—total, seventy-eight Building superintendent’s branch—superintendent and assistant, other employes, eight—total, ten. Hospital and training stables—trainers and drivers, two; other employes, nine—total, eleven. Grand total, 1,716. In Manhattan and the Bronx the force numbers 1,464 officers, engineers, and firemen of all grades, including probationers. The-fire-extinguishing force is as follows: Engine companies, including three fireboats (the New Yorker, the Robert A. Van Wyck—now the W. L. Strong—and the Zophar Mills), seventy-five; hook and ladder companies, twenty-five, eight being double companies. Two companies are also equipped with searchlight engines, and three with water towers. The average number of officers and men in single companies below Fifty-ninth street is fourteen; above that street, twelve; in single companies having water towers the average number is eighteen. The use of solid rubber tires has greatly lightened the wear and tear on the apparatus, and has, besides, added greatly to the comfort of the men. It is hoped every piece of apparatus will be so equipped. During 1901 hook and ladder company No. 23 and engine company No. 74 were organised and equipped with a fire engine and hose wagon and hook and ladder truck respectively. These were stationed in the West Side residential district. In West Thirty-third street, also, a new hook and ladder company was equipped, besides, with an electrical searchlight engine and water tower. On Christmas Day, engine company No. 75 was organised and placed at One Hundred and Eighty-third street and Jerome avenue, borough of the Bronx, and equipped with a steam fire engine, hose wagon, and hook and ladder truck. The following is the list of the equipment of the fire department of Greater New York:

Day Off Granted to Firemen