At long last a definite step has been taken towards obtaining a much needed new building code for this city. The ordinance provides for a commission of seven experts in the science and practice of building, who shall have been ergaged for not less than five years in business on their own account in New York city, a representative of the corporation counsel exofficio, and of the board of buildings. But why should not the fire department be represented in the commission ? Surely anything connected with the erection or inspection of buildings touches that department nearly. The board of under writers also, it would seem, should have a representative.— Thanks to rain and thaw—very little to Commissioner McCartney, though, perhaps, to his prayers—the highways and byeways of Greater New York are now passable for the fire apparatus. But did not Cromwell exhort his men to “ trust in Providence and keep their powder dry ?” And was it not a Napoleonic axiom that Providence was “on the side of the strongest battalions?” Mr. McCartney’s battalions were very weak.—The law committee of the council has reported against the proposed Sulzer ordinance to compel theatrical managers to put up anti draught screens in the rear of theatres. To do so would be to violate the rules of the building and fire departments — Fire Commissioner Scannell has lent Chief Bonuer a fast trotter, so that his wagon may get round quickly during the season of heavy roads. He has also given to the department a phaeton and coach horse—the latter a match for one he gave it in 1894.—Fireman Michael Loring, of truck No. 5, borough of Brooklyn, while working on a tire at 91 Eighth avenue in that borough, fell from the second’ story window into the area, and was badly hurt.—All must sympathize with Rev. Dr. Brann, of St. Agnes Roman Catholic church. East Forty-third street, on the great havoc wrought by the flames in his beautiful church. Several flue paintings are altogether ruined; the beautiful high altar badly damaged; its steel canopy utterly wrecked ; and the new organ rendered useless. The loss, which fortunately is fully insured, is $70-, 000. The firemen had apparently subdued the first early morning outbreak; the second came nearly causing a conflagration.—The great fire of Sunday night is still the talk of the the town, which for the most part indorses Chief Bonner’s opinion given several years ago. 1/e then said that,to handle such fires effectively, the high buildings must be limited in height to ihe capacity of the water supply and apparatus employed to extinguish fires in them; second, the height must be be limited to 150 feet; if it is necessary to increase that height* beyond the power of the fire department to cope with the fires* then additional precautions should be introduced to aid the firemen in extinguishing the flames. The Home Life build, ing has escaped wonden ullv. There seems to be little or no buckling or leaning on the part of the columns and steel girders. though there may be some distortion or bending. There is certainly no appreciable warping. The beams were all covered with brick and terra cotta and asbestos.—In endeavoring to save the life of a wagon driver,Edward Tracy, driver of engine No. 65, met with injuries which may cause his death, He was hurrying with his three-horsed five ton engine (almost a new one) from his quarters between Fifth and Sixth ave nues and was turning into Broadway, near Forty-third street, when he saw a light delivery wagon coming up Seventh avenue. The driver did not see or hear the engine approaching, and Tracy, seeing that, rang his gong furiously, while Engineer Connelly blew the whistle lordly. The driver of the wagon then lost his head,and Tracy, to avoid killing him and his horse, did not hesitate o risk his own life, and quickly wheeled his horses round, heading them for the gutter. For a moment the engine, suddenly checked, sipped over the asphalt, slightly careening on the right hind wheel. Then it struck a snowheap-a monument of McCartney incapacity—and toppled over, horses and men going with it. So great was the momentum that the engine slid about thirty-five feet before it was checked—the horses being pushed forward with it on the ground. Close behind the engine came the company’s tende^ on which were Firemen I)e Groot and several other members of the company. They jumped from the tender and went to the rescue of their injured comrades. Tracy was at once unstrapped from the seat and taken in a jiffy into a nearby hallway. Captain Norris ar.d Engineer Connelly were picked up unconscious, but soon revived. Tracy was removed in an ambulance to Roosevelt hospital,and Captain Norris and Connelly to the comoany’s quarters. Connelly was seriously hurt.while Captain Norris suffered only from severe shock. Tracy may not survive his injuries A similar accident happened last Christmas Day and caused the death of Fireman Calnan, the driver of engine company No. 17. Yet there are those who do not think over firemen heroes!—Chief Baxter of the Philadelphia fire department, and Chief Building Inspector Iladcock, of the same city, came to this city to inspect critically the ruins of Sunday night’s fire. 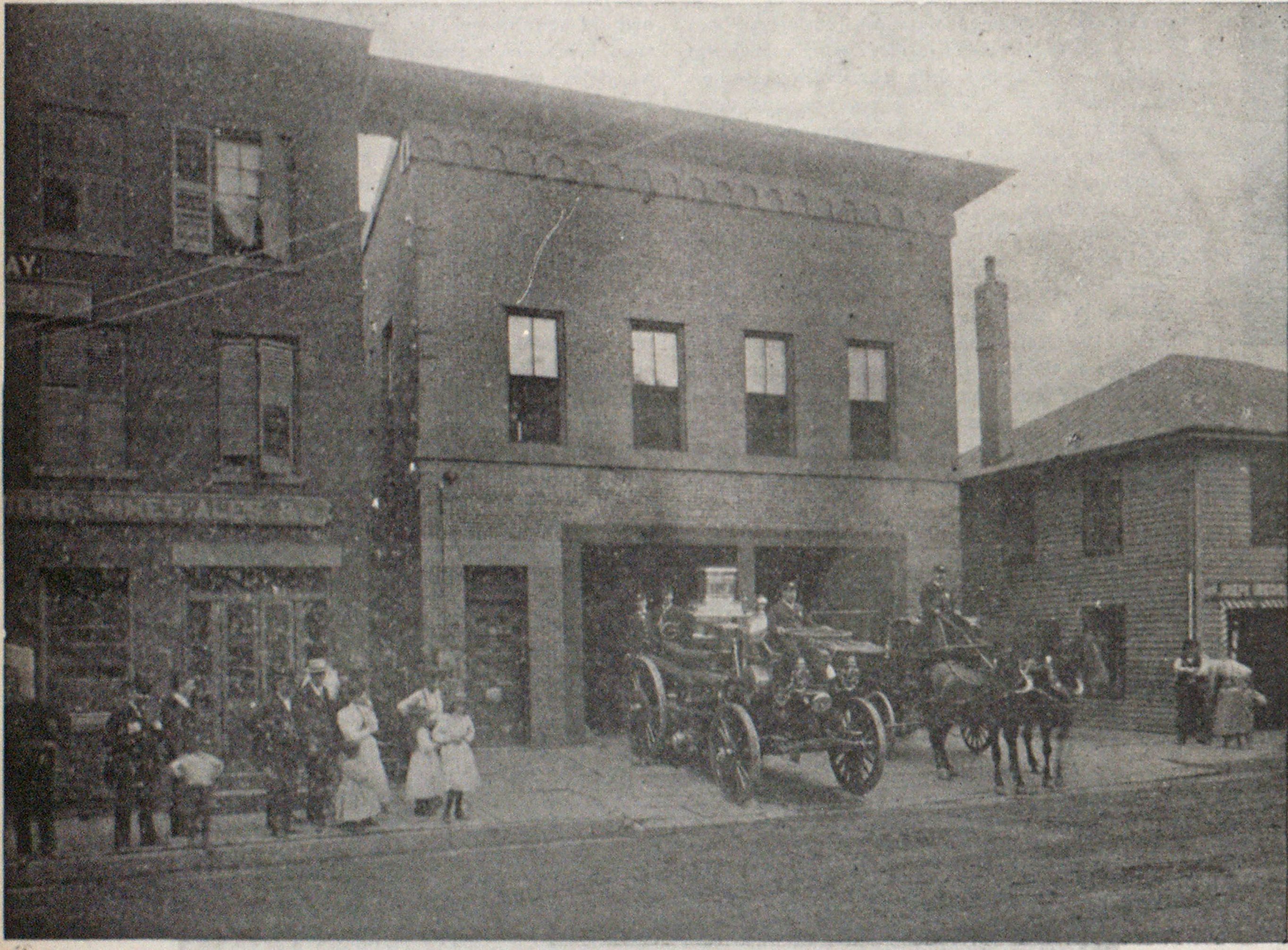