Various awards were presented during the Opening Ceremonies on April 10 and 11 at Fire Department Instructors Conference (FDIC) International 2019 in Indianapolis, Indiana, at the Indianapolis Convention Center. Here are some of the highlights. 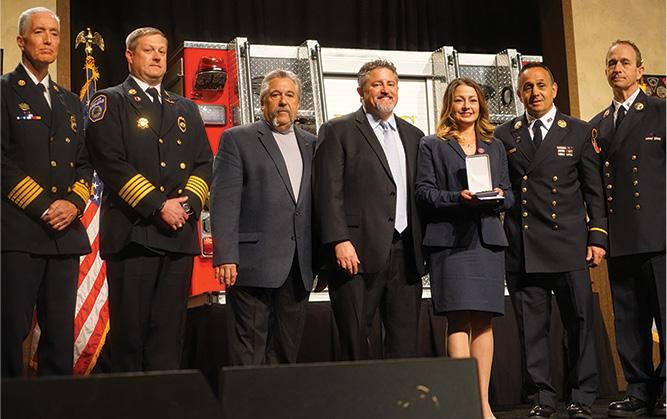 On October 11, 2018, Hanover Fire-EMS was managing a heavy call volume resulting from the impact of Tropical Storm Michael. Engine 6, Clark’s unit, was dispatched to an accident on the Interstate highway at 2100 hours. As the crew was dismounting the apparatus to size up the incident, Clark was rounding the front of the engine when he observed a tractor trailer speeding toward the unit. Instead of using the moment available to jump to safety, Clark yelled a warning to his crew, providing them with split-second notice to gain cover and brace for impact. A firefighter riding behind Clark was reaching back into the jump seat to retrieve a medical bag when he heard Clark’s warning. He dove back into the cab headfirst as the tractor trailer approached and struck the rear of Engine 6. That firefighter emerged from the wreckage without significant injuries and was able to begin treating his fellow firefighters. Engine 6’s driver and the other jump seat firefighter received significant life-threatening injuries.

The impact of the tractor trailer drove the engine over the top of Clark, pinning him underneath the fire apparatus. Crews worked to free him and begin treatment; despite their best efforts, Clark was pronounced dead at the scene.

Gustin, a 45-year veteran of the fire service and a third-generation firefighter, began his career in 1973 as a volunteer firefighter in the Chicago area. He joined Miami-Dade in 1978. He is a lead instructor in Miami-Dade’s Officer Development Program and conducts training programs for firefighters throughout the United States and Canada. He taught classes in fire science, industrial fire safety, and shipboard firefighting for Miami-Dade College; forcible entry techniques to local and federal law enforcement agencies and the U.S. Agency for International Development; and training programs for fire brigades in several Caribbean countries. 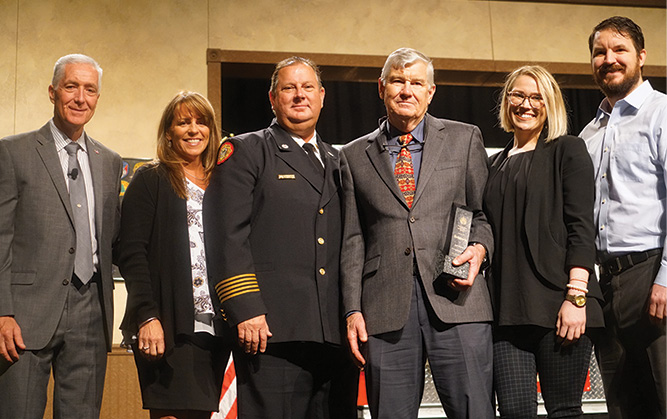 As a member of Miami-Dade’s International Disaster Response Team, he responded to earthquakes in the former Soviet Union in 1988 and in the Philippines in 1990. Gustin was named Florida’s Firefighter of the Year in 1990 for rescuing a woman and her child trapped between a fire and the iron burglar bars on the windows and doors of their home.

FDIC International Education Director Chief (Ret.) Bobby Halton presented the award. Gustin was lauded by numerous fire service peers and notables. Perhaps a comment that most reveals Gustin’s dedication and commitment to the fire service is this one from Glenn Corbett, a Fire Engineering technical editor: “At a time when many senior firefighters would begin to coast out the rest of their careers, Bill is on his hands and knees still striving to discover one new nugget of firefighting information that he can share.” 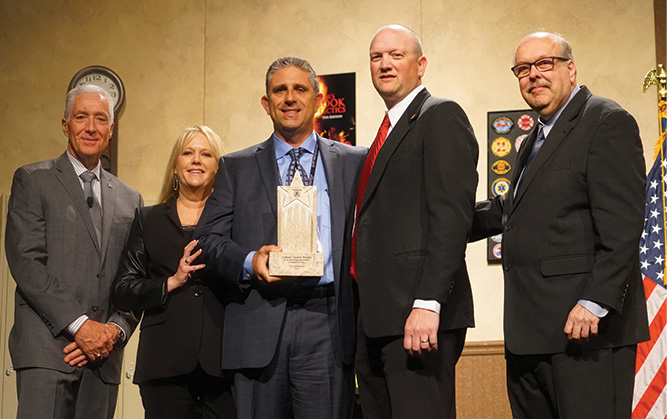 Kastros is a 32-year veteran of the fire service with a passion for training that he attributes to “a deep family tradition in the fire service.” He is the author of several books and videos from Fire Engineering, including Mastering the Fire Service Assessment Center, Mastering Fireground Command-Calming the Chaos! and Mastering Unified Command-From Hometown to Homeland. He has been an FDIC International instructor and has written articles for Fire Engineering for the past 10 years. He was the FDIC International keynote speaker in 2013.

In 1994, he founded a training team, now known as Trainfirefighters.com, through which he has trained thousands of firefighters from around the world in command, tactics, leadership, and officer development.

Devon J. Wells, president of the ISFSI, presented the award, which incorporates the Training Achievement Award previously given by Fire Engineering at FDIC. The award is named for George D. Post, a longtime member of the ISFSI and a member of the Fire Department of New York. He was an illustrator of fire service publications and a developer of instructional materials; he is considered by many to be the father of visual training materials used by fire service personnel around the world.

Longtime FDIC audiovisual (AV) team member Donnie Dymes was awarded a Distinguished Service Award at Opening Ceremony Day 2. Dymes served in the volunteer fire service in the Munnsville (NY) Fire Department and was a member of the U.S. Army during the Korean War. He was an active member of the International Society of Fire Service Instructors and state and local training organizations and associations. He was the supervisor of the New York State Academy of Fire Science. Education Director Chief Bobby Halton made the presentation. In presenting the award, he noted that Distinguished Service is bestowed to members who stand out for their exceptional meritorious service to the fire service through their participation in FDIC International. 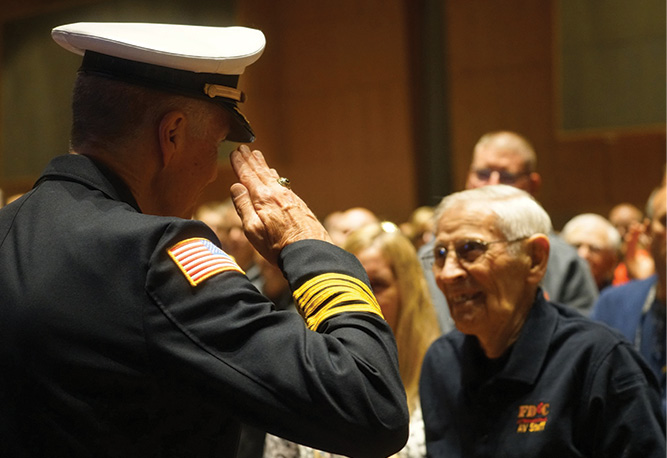 Dymes began attending FDIC in 1969 and has attended annually since 1976. He assumed command of the AV support and control team in 1989. Halton noted: “As ‘The Master Sergeant’ of the AV crew (as he was known to his crew), Dymes guided the group as it developed into a most competent, qualified, elite group of AV support technicians. After a shift in command to Ed Olmstead, Dymes continued to serve the team in a support capacity to this day. In all, he has devoted 30 years to FDIC AV’s function. Dymes’ mantra has been, ‘Everything is for the student.’”

Chief Ernest V. Malone of the Indianapolis (IN) Fire Department (IFD) was the 2019 recipient of the FDIC Service Award, traditionally presented at the IFD Recognition Banquet, which was held on January 25, 2019. The award acknowledges Indianapolis-area personnel who have demonstrated outstanding service to FDIC International over an extended period. FDIC Education Director Bobby Halton presented the award. 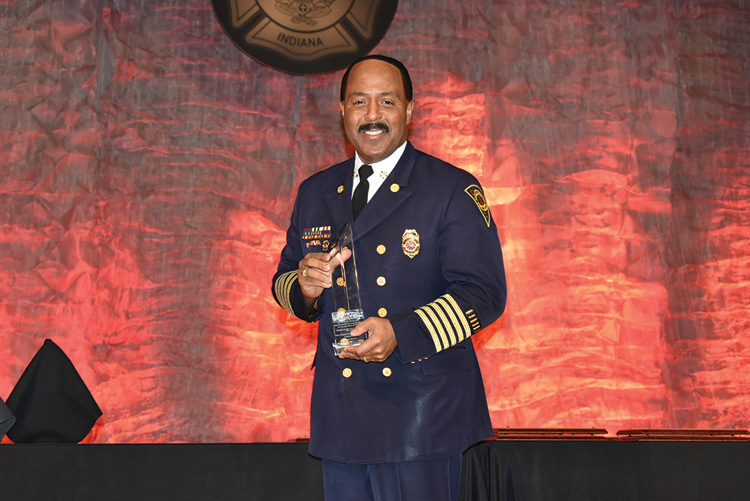 Chief Malone, noted Chief Halton, “has been the most influential supporter of FDIC on behalf of the IFD. He has been active in every phase of the show and always provides the guidance and direction necessary to complete the mission. He encourages city leaders, department members, and his fellow city officials to be involved with and connected to FDIC. His dedication and hospitality have made Indy the home of FDIC.