Chief Howard L. Stanton, of Norwich, Conn., has just issued his annual report for the year ending June 30, 1915. The department responded to 212 alarms, 31 less than the previous year. Eleven alarms were for fires outside the city limits, assistance being requested by telephone. The greatest distance traveled was to a fire at Willimantic on January 9. This trip was made by the motor chemical wagon with a crew of ten men, covering the distance of eighteen miles in 34 minutes. The total fire loss for the year was $22,017.59 on buildings and $21,176.93 on contents. The value of the property at risk was $635,001. The largest fire of the year occurred June 3, doing $10,000 damage to a business building. While the department was at work at this fire an alarm came in for another fire which did $2,500 damage. Of the fires, 46 were caused by chimneys, 32 by brush and grass, 11 by rubbish, 10 by locomotive sparks, 9 by children with matches, 7 by back fire of automobiles, and 6 by careless smokers. Defective wiring was the cause of but one fire. The department travelled 621 3/4 miles to and from fires, and was in service altogether 352 1/4 hours, laying 32,400 feet of 2 1/4-inch, 2,050 feet of 3-inch and 9,850 feet of chemical hose, and raising 1,980 feet of ladders. 2,378 gallons of chemicals were used. The apparatus in service in the department consists of: One aerial truck, one city service truck, one-third and one-fourth size Metropolitan steamers, one motor combination chemical and hose wagon with 40-gallon tank, three horse-drawn combination chemical and hose wagons one with two and the others with single 25-gallon tanks, two hose wagons used as exercise and supply wagons, two exercise wagons of light construction, one chief’s buggy, one hand-drawn hose carriage, and nineteen 3-gallon extinguishers. In all, 9,200 feet of hose is distributed among the various companies, 1,000 feet having been purchased during the year. There are thirteen horses connected with the department, the same number as reported one year ago. In addition to the thirteen permanent horses, there are four, hired to respond to Engine 2 and Truck 2 in case of fire. New hydrants have been set by the Water Department the past year and new standard outlets placed on those that were not standard size, diameter and thread. About 495 hydrants are now in service, and thirteen fire cisterns connected up with the water system with gates near the covers of cisterns. The telegraph alarm system consists of 66 boxes, public and private, connected to 34 miles of wire, four mechanical bell strikers, eighteen gongs and tappers, one six-circuit and one three-circuit repeaters, 144 jars of storage battery, and one marble controlling board with the necessary switches, etc. Two boxes were added during the year. Chief Stanton and members of the department have inspected buildings throughout the business district, thereby becoming familiar with all stairways, exits, and the general condition and construction of the various structures. A card system is kept of all inspections. The expenses of the department were $35,998.44. spent as follows: Salaries, $26,755.93; extra service (drawing Engine 2 and Truck 2 and care of heater), $404; alarm system, $315.96; horses and harness, including shoeing. $588.62; forage, $1,884.15; repairs to stations, $507.20; furniture. $86.10; gas and electric lighting, $174.92; fuel, $966.70; water, $115; telephones, $227.26; laundry, $110.47; hose, $1,375; new equipment, 326.40. repairs to apparatus, $874.34; supplies, $418.56; miscellaneous, $604.88; office, $46.86; motor combination car, $216.29. Three members of the department died during the year. The present force consists of 24 permanent men, 28 call men and 30 volunteers. The Board of Fire Commissioners is made up of Alderman Casper K. Bailey, chairman, and Councilmen William J. Kramer and Milo R. Waters. Adam J. Gernhard is assistant chief. Chief Stanton strongly urges the motorization of the entire department. 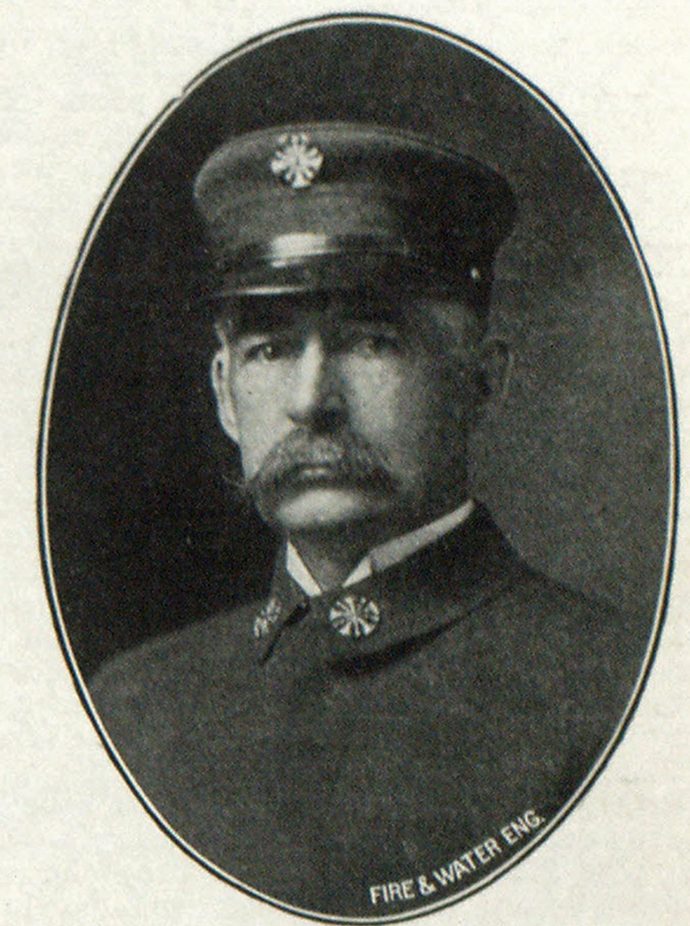