Families of thirty-two shipyard workers were made homeless on September 25 when a fire raced through a 32-family housing unit in the War Terrace Apartments, Richmond (Calif) overlooking the Kaiser Shipyard No. 3.

Six Richmond companies responded to the two alarms but although the fire was soon under control firemen were forced to overhaul for more than two hours because of the way the fire had spread through wooden heating vents. Fire Chief W. P. Cooper, reporting the $25,000 loss said his men had to “take the place apart” to extinguish the blaze and added “I’m thankful that this time there was no loss of life as there has been in other of these fires.” Perhaos the fact that the fire occurred at 1:24 P. M. instead of A. M. helped. The cause was an overheated stove. Fire Chief Cooper has relentlessly fought the type of construction employed in housing projects and more than once has clashed with housing authorities over the fire hazards which have been responsible for not less than a dozen deaths in dormitory fires in the overcrowded city. In some cases, inadequate fire alarm and hydrant protection have been contributing factors.

And Still Another in Richmond

Five pieces of apparatus battled the blaze for more than two hours with off-shift firemen and auxiliaries aiding in fighting the fire which spread through the interior along the heat ducts.

Although none was injured, many had narrow escapes.

The first alarm was telephoned by a resident at 2:30 A. M. A box was struck immediately and a second alarm was radioed at 2:34 by the first chief to arrive. Damage was estimated at about $20,000.

Thomas J. Powers, 28, veteran of Guadalcanal who saw action with the 164th Infantry, recipient of the Purple Heart, a Distinguished Service Medal and a Presidential unit citation, recently became the first veteran of World War II to enroll in the San Francisco Fire Department.

Powers was given a medical discharge after he was wounded in action against the Japanese. He qualified for a limited tenure appointment and has been assigned to Engine 28. After the war he will be permitted to take a civil service examination to fill one of the vacancies caused by deaths of firemen in service with the armed forces.

When Navy fire fighters at the Hunters Point Drydock in San Francisco were unable to bring under control a fire aboard a submarine on the night of October 1, they pulled Box 6721 outside the reservation firehouse to summon San Francisco firemen.

For nearly three hours the combined forces, augmented later by the San Francisco deparment’s rescue squad, fought the fire before it was brought under control. The submarine was undergoing a routine overhaul when the fire broke out.

The Navy, which barred city policemen from the scene, said there were no casualties. The Navy did not immediately make an estimate of the damage

but set up a board of inquiry.

Fire resulting from a combination of an unnamed truck driver, a lighted cigarette and punctured gasoline tank, on September 10, left 300 persons homeless and caused damage estimated at $100,000 to a three-story hotel at Des Rios, Sacramento (Calif.) suburb.

According to Sheriff Don Cox, the driver backed his truck into a pillar in the garage, damaging the tank. He got out to inspect it while holding a lighted cigarette and an explosion and fire followed, severely damaging four streetfloor stores and many rooms in the hotel before firemen from Sacramento and several nearby towns were able to control the blaze.

Fire originating in the basement kitchen from unknown causes the night of September 23, completely destroyed the 400-room Weed hotel at Dunsmuir. Siskiyou County (Calif)—a division point on the Southern Pacific Railroad. Damage is estimated at $200,000. Two men were killed and two others seriously injured.

Firemen, policemen and volunteers were unable to enter the hotel to search for occupants.

One fireman was injured and damage to the extent of $200,000 resulted from a three-alarm fire that destroyed a fourstory brick building used as a slaughter house by the White, Pevey and Dexter Company at Worcester, Mass., on November 1. The injured fireman was James Ford of Engine 6. One section of the building was also used as a liquor storehouse for the Miscoe Spring Water Company and it was the loss of the liquor which ran the figure to $200,000.

All of the structure with the exception of a strip of the main building, and an ell, was destroyed by the flames. The fire started in the rear of the building in a spot employes said had not been visited by anyone for several hours.

Twenty hose lines were laid into the fire, some from Shrewsbury Street under the tracks of the Boston & Albany Railroad, and others from Franklin Street. A railroad signal house adjacent to the fire continued to operate throughout the fire, although the blaze was often dangerously close. 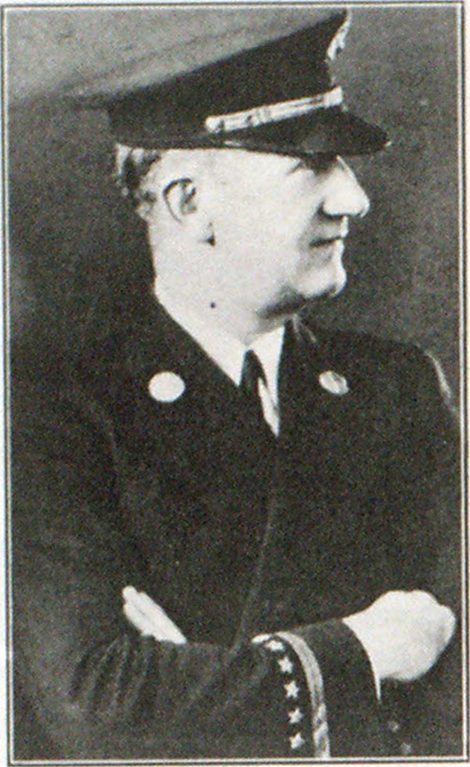 The recent holocaust at Port Chicago which, while the cause is unknown, may have been touched off through carelessness of a smoker, has served to focus attention on violators of no smoking edicts in effect along the waterfront and on military reservations.

In the San Francisco Bay Area the Coast Guard, acting under orders of Commander Paul B. Cronk, the Coast Guard Captain of the Port, has been conducting a drive since April 1 in a crackdown on violators. More than 30 men, most of them civilian dock workers, longshoremen or ship repairmen, have been arrested and arraigned before judges sitting in Federal District Courts.

The judges, among them A. F. St. •Sure, Michael Roche and others, have aided the drive by imposing penalties, severe in comparison with those that were given out a few months ago. Penalty for conviction runs up to one year imprisonment and/or a $5,000 fine, according to Lieutenant John J. Sullivan of the Coast Guard, whose job in the Bay Area is to prosecute violators.

Where small fines were levied in the past, 60 or 90 days in jail is now considered a light sentence.

Richard T. Nelson, first officer of a merchant ship loading at Benicia Arsenal and whose name was signed to “No Smoking” notices posted aboard ship, was fined $250 when a Coast Guard Port Security guard found him smoking in his cpiarters. Victor J. Samulis, a merchant seaman of Cleveland, O., got 90 days in jail for smoking aboard a vessel loading explosives at the Port of Richmond, and even his excuse that he lighted his cigarette with a blow torch with which he w’as working at the time did not save him.

Commander Cronk said Coast Guard officers investigating small fires aboard ships and along the docks have found evidence that smoking was the cause in nearly every case. With San Francisco rapidly approaching the No. 1 position among the nation’s embarkation ports, greater caution than ever before must be employed, he said.

George Holman, 46-year-old Negro cafe owner, found guilty by a jury of seven men and five women in San Francisco Superior Court on 22 counts of murder—one fo.r each of those w’ho died during the disastrous New Amsterdam Hotel fire of last March 27—has been sentenced by Superior Judge Murphy to spend 22 life terms in prison, the sentences to run consecutively rather than concurrently.

Since, under California law, seven and a half years must be served on a life sentence before a parole eligibility, the minimum time for 22 consecutive terms w’ould total 165 years, one of the sternest sentences ever meted out in San Francisco Superior Court.

Court attaches declared Holman’s sentence the “toughest” handed down since the Howard Street gangster rape-murder case of years ago when the defendants were sentenced to a straight 50 years in prison. That, however, was before passage of the indeterminate sentence law.

Holman, charged with having set the frame hotel afire to “get even” with his alleged paramour, Gertrude Jordan, was stunned by the sentence.

The sentence climaxed a trial of seveyal weeks, a trial brought about by the worst holocaust by fire that has hit the city since the earthquake and fire of 1906. Fire officials testified that the fire spread so rapidly and with such great intensity that some volatile liquid must have been used to feed it.

Frederick (Fred) J. Bowlen, Battalion Chief and Historian of the San Fyancisco Fire Department, retired after 41 years of service, due to ill health.

“Fred” as almost everyone on the Coast knew him, held the rank of Battalion Chief from 1919 until last year when he was advanced to Deputy, devoted every spare moment to his unofficial job-—that of Historian of the Department.

The 1906 conflagration wiped out all historic records of the department. Bowlen, who had kept records of what went on in the department since the day he reported for duty November 1, 1903, spent his off-duty hours delving and his vacations in research at libraries throughout the State in the monumental job of not only restoring those records but in bringing the story up to the minute. The result is the History of the San Francisco Fire Department, a stupendous work of 60 chapters, more than 22,000 typewritten pages and more than eight million words!

His history, beginning with the first fiye in the shanty-shack-adobe hamlet that was San Francisco in 1847, on through the volunteer and Horse Age to the modern motorized department, has helped settle many a dispute over “who was who” and “what was what.”

“For 41 years,” said Chief Bowlen, “I have had the companionship of the finest and noblest body of men ever organized in any branch of public service. It is with much regret that I am compelled to retire. To the officers and men of the Fire Department and to the citizens of San Francisco I extend my best wishes and thanks for their assistance, cooperation and warm friendship shown through the years. May the spirit of the pioneers oi San Franct-co continue in the department!”

Actually, the chief hasn’t retired for already he’s digging through the archives and adding worus to the amazing history be has compiled already. Fred Rowlen just couldn’t he contented being put out to pasture.

A member of the U. S. Coast Guard before being appointed to the department, he spent most of his time as battalion chief in the Third Battalion. Three years ago he was badly burned in an explosion at a provision house fire and as a result was hospitalized for 21 days and spent many weeks on sick leave.

He returned to duty in the Third Battalion until July, 1942, when Chief Albert J. Sullivan, unable to continue as head of the Auxiliary Department and act as Chief Engineer in the absence of Chief Charles Brennan (retired), who was ill, appointed him to head the auxiliaries, which job he held for two years.

“An officer, gentleman, and splendid fire tighter who has served the public well and upheld every tradition of the Fire Department” is the parting tribute paid him by Chief Sullivan.

Chief Schaefer is married, has two daughters and a son.

Appointed to fill the vacancy caused by his retirement was Captain William Francis Murray, son of a Fire Department officer: he was appointed to the Department September 9, 1920, made a Lieutenant December 10, 1928, elevated to Captain May 11, 1939, and has been Acting Battalion Chief, 6th Battalion, since January 31, 1944.

Chief Murray, married and father of a son, is widely known in the Department, having served with nearly every company in his 24 years of duty. He at one time managed the Department’s Glee Club and has fo,r some time been chairman of the publicity committee of the Annual Fireman’s Ball.

Telling Your Story to the Public Wins Friends