Guthrie, a 21-year veteran of the department was named lieutenant in 1945 and two years later was promoted to captain. In February 1953, he was injured fighting a fire, but while abed convalescing attained first place in an examination for battalion chief. Prior to his most recent promotion, Chief Guthrie served as first assistant chief.

Paul Bing, who attained first place in a competitive examination, was named chief of the Sandusky, Ohio, Fire Department on May 11. He succeeds Wilson McLaughlin who resigned earlier this year to become state fire marshal.

Chief Bing was appointed to the department in 1937, and was promoted to lieutenant in 1949. He was appointed captain in 1955 and assistant chief in 1958.

R. H. Dickerson, a veteran of 25 years service, and for the past 12 years assistant chief of the Austin, Tex., Fire Department, was named fire chief on June 25. He succeeds Chief John Woody who was elevated to assistant director of public safety last October. Chief Woody headed the Austin department for more than 30 years.

Chief Dickerson joined the department in 1933 and was promoted to captain in 1936. He became district chief in 1940 and assistant chief in 1947.

George A. Bulger has been named chief of the Rumford, Maine, Fire Department to succeed Chief Solomon A. Mercier who retired on December 27, 1958, after 32 years service.

Two veteran San Diego fire fighters were named in March to fill newly created jobs as assistant city fire chiefs. They are Paul B. Allen, 55, in the department since 1924, and Orville II. Lusk, 54, who joined in 1928. Both Allen and Lusk have been battalion chiefs since April, 1947.

Fire Chief George Courser said the new assistants will be directly responsible for supervision of the fire fighting force, leaving administrative duties to himself and Deputy Fire Chief Al Penrose. Both Courser and Penrose, however, will continue to respond to multiple-alarms.

George H. Proper, Jr., chief of the Midway Fire Department, Town of Colonic, N. Y., was named deputy director, New York State Division of Safety on July 16. He has been associated with the New York Fire Insurance Rating Organization since 1950. During the past five years he has been with the Engineering Department engaged in municipal inspection work. A correspondent for FIRE ENGINEERING, Chief Proper is a certified New York State fire instructor and has lectured at several state instructor training conferences. He is also widely known in first aid and rescue circles.

Jim Foster was recently named fire chief of Minneola, Kans., upon the retirement of O. R. Byerly who served as fire chief for 30 years. Chief Byerly was a member of the original fire department organized in Minneola in December 1922.

Gordon Snyder became chief of the Beloit, Kans., Fire Department on July 1, succeeding Ed Schurtz who filled the post for the past 15 years.

Battalion Chief Thad Whippo, formerly head of the Los Angeles Fire Department’s fire information and education unit, was recently promoted to assistant chief and placed in charge of Division 4, San Fernando Valley. He succeeds Assistant Chief Herbert A. Krumsick, who retired July 3. Krumsick joined the department in 1914 and was senior man in service. Battalion Chief Elwood M. Culp has been named to succeed Whippo in the information unit.

In another change, Battalion Chief Henry Sawyer, Mountain Patrol commander, was promoted to assistant chief and remains in command of the patrol.

Wayne C. Nelson was appointed chief of the Galesburg, Ill., Fire Department on June 30, to replace W. T. Ekwall who resigned in May. Born in Galesburg 42 years ago, Chief Nelson joined the department in 1942. He was promoted to captain in 1951 and to third assistant chief in May 1958.

Kenneth Garcia, engineer of the Decoto Fire Department, has been appointed chief of the Union City, Calif., Fire Department. The new department is a result of the incorporation of the cities of Decoto and Alvarado into one community with the name Union City.

Miami Mayor Robert K. High (left) and City Manager Ira Willard (right) congratulate Miami Fire Chief Newton L. Wheeler on presentation of his past president’s plaque by the Southeastern Division of the International Association of Fire Chiefs. The plaque was awarded to Chief Wheeler for his outstanding leadership as president for the year 1958-1959.

Glenn C. Holmes advanced to chief of the Monroe, Mich., Fire Department on July 1, upon the retirement of Chief Russell Emerson, a veteran of 36 years service in the department. Chief Holmes joined the department on August 5, 1929. He was vice president of the Michigan Fire Fighters Association from its organization in 1933 to 1949.

Rear Admiral J. W. Ailes, III, USN, was made an honorary fire chief of the Los Angeles, Calif., Fire Department on June 6. Los Angeles Fire Chief William Miller presented Admiral Ailes a fire chief’s helmet in a ceremony in the Pentagon office of Fred A. Bantz, Under Secretary of the Navy.

The presentation was made on behalf of the International Association of Fire Chiefs and the hundreds of men in the fire services who served with the Navy and other branches of the armed forces, according to Chief Miller, who is himself a commander in the United States Naval Reserve.

Chief Daniel G. Aid, U. S. Naval Station Fire Department, Green Cove Springs, Fla., will retire on September 1 after 40 years in the fire service. Chief Aid was appointed to the Jacksonville, Fla., Fire Department in 1919 and was promoted to lieutenant in 1927. He was appointed a captain in 1933 and held that position until his retirement from the city department in 1946.

On March 6, 1946, he assumed command of the Naval Station fire department and has served continuously in that post until recently when he was placed on extended sick leave due to hypertension and a heart condition. A contributor to FIHE ENGINEERING, he is a member of the International Association of Fire Chiefs, the Florida State Fire Chiefs and during 1953-54 served as state vice president, Southeastern Association of Fire Chiefs.

Retired Lieutenant Hugh Kelleher of the New York Fire Department, left, presents plaque with official chief’s badge to Clifton Foote, recently elected chief of the Dobbs Ferry, N. Y., Fire Department. Chief Foote became a member of Resolute Hook and Ladder Company in 1943. Subsequently he served as recording secretary, warden, lieutenant and captain. In April 1955, he was elected second assistant chief of the department and in April 1957, he was advanced to first assistant chief. 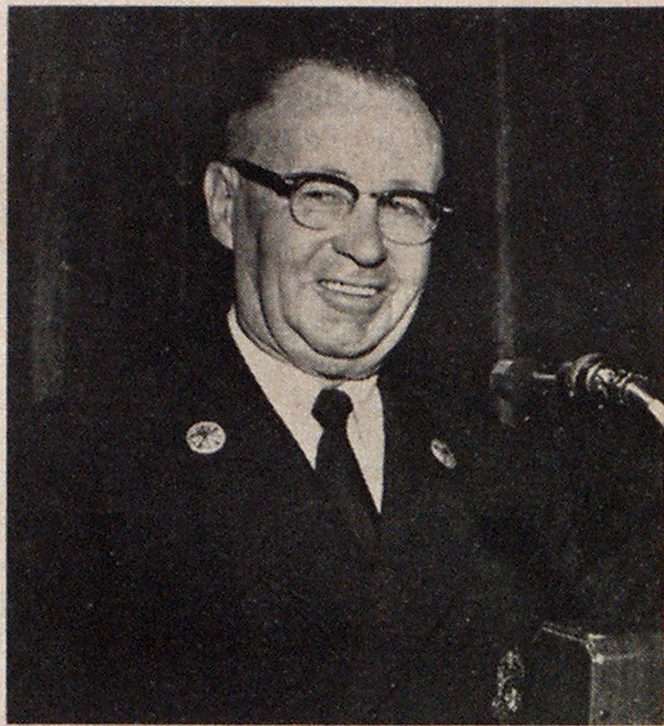 Chief N. R. Haltiwanger, U. S. Navy Fire Department, Green Cove Springs, Fla., will retire November 1 after 41 years in the fire service. He was a member of the Jacksonville, Fla., Fire Department for 27 years, retiring as a captain in 1946. He joined the Navy department the same year as assistant chief and was named chief in 1959.

Assistant Chief T. J. Moccia has been named chief effective with Haltiwanger’s retirement. Chief Moccia was appointed to the Navy fire department in 1946, promoted to captain in 1947 and to assistant chief in 1956.

William E. Hanna, 32, of Mesa, Ariz., became the first fire chief of Tempe, Ariz., on November 15 under a new setup whereby Tempe will have a fully paid department. Hanna was the unanimous selection of the city council on recommendation of the council’s fire committee which has made a study of activating the paid department.

Assistant Chief James C. Batsch, Ravenna, Ohio Fire Department, was named Chief on October 15 succeeding to the position left vacant when his father, Chief Andrew Batsch retired recently. Chief Batsch was appointed to the department in 1948 and promoted to assistant chief in December 1957.

Frank J. Ford was recently appointed Chief of Department of Lawrence, Mass. He succeeds Chief Forrest J. Duncan who retired last spring. Chief Duncan was appointed a reserve fire fighter in 1928, and a permanent fire fighter in 1934. He was promoted to lieutenant in 1947 and to captain in 1948. He was named deputy chief and assigned as drillmaster in 1950 and became Chief of Department on Decemlyer 29, 1957.

Chief Ford was appointed a reserve fire fighter in 1934, and became a permanent fire fighter in 1940. He was promoted to lieutenant in 1946, and to captain in 1948. From March, 1945, until February, 1948, he headed the Fire Prevention Bureau. He was promoted to deputy chief and assigned as drillmaster in February, 1960, and named Chief of Department on August 28, 1960.

Chief George Courser, retired December 24, from the San Diego, Calif., Fire Department which he has headed since 1947. He joined the force Christmas Eve, 1914.

At a recent civic tribute luncheon in the ballroom of the Hotel U. S. Grant, Chief and Mrs. Courser were praised by a galaxy of personalities, and showered with gifts, including a trip to Honolulu. Captain Robert Stephenson, president of the Firemen’s Relief Association presented the couple with a check in the name of the organization and Lieutenant William Gibbs, president of Fire Fighters Local 145, San Diego, pinned an inscribed gold badge on tire chief for “your dedicated work for better fire service for all of us.” An unusual honor was conveyed by Dr. Joseph W. Telford, chief of staff of Sharp Memorial Hospital, who appointed the chief “honorary doctor and member of the hospital staff.” In another tribute Ae chief was the guest of the U. S. Marine Corps at a special troop review at the San Diego Marine Corps Base held in his honor. A number of top officials of the Armed Forces, including Major General Victor Krulak, commanding general, Marine Corps Depot and Admiral Murr Arnold, commandant, Eleventh Naval District, attended Ae luncheon and ceremonies.

Acknowledging the tributes, Chief Courser said his career “proves that there is an opportunity for people to go out and get ahead if they try hard enough.” The son of a retired Chicago fire captain, Courser came to San Diego in 1912. F’uture plans contemplate continued residence in San Diego after a two months’ cruise.

Fire Chief Norman A. Brown of tlie Park Ridge, Ill., Fire Department was recently honored as one of 15 citizens who had been chosen for outstanding and unselfish contributions to the city in its first half century. The 15 who most influenced civic welfare were feted at a dinner banquet held in their honor and commemorating Park Ridge’s golden anniversary as a city.

Chief Brown, a native of Park Ridge, was cited for his everlasting devotion to tlie furthering of better fire safety rules and regulations for the 33,000 people entrusted to his care. A veteran of 24 years service, he has served as vice president of the Cook County Firemen’s Suburban Association in 1954, and was elected president the following year. He serves on the board of directors of the Illinois Firemen’s Association, and is a member of the Illinois Fire Chiefs Association and the International Association of Fire Chiefs.

Cleone Puderbaugh, chief of the Oak Lodge, Ore., Fire Department, for the past 10 years, has resigned to accept a position as fire insurance investigator in Portland.

Edward A. Beadle was recently sworn in as fire chief of Union City, N. J. He was appointed to the fire department in November 1935, and three years later was promoted to captain. While on active duty with the U. S. Army Air Corps in 1943, he was promoted to deputy chief.

Chief Beadle is a graduate of a course in municipal fire administration at Rutgers University. While in military service, he was sent to Chicago where he studied at Illinois Institute of Technology. He also lias attended fire classes at the Delelianty Institute, New York City, for six and a half years.