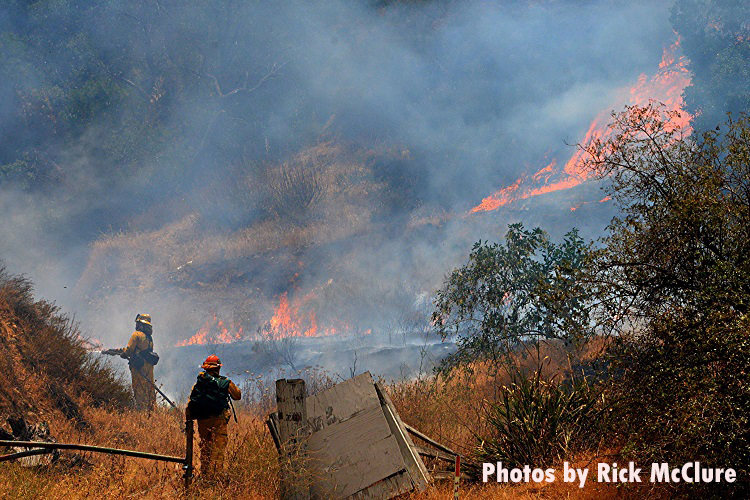 MORE PHOTOS FROM THIS INCIDENT >>>

Photos and Story by Rick McClure

A 20-year-old Lancaster, California, man was arrested Thursday evening in connection to a brush fire that destroyed an outbuilding (e.g., a shed, barn, or garage on the same property but separated from a more important building) near Towsley Canyon, according to Santa Clarita Valley Sheriff’s Station officials.

The suspect was allegedly seen at the Field of Fire Paintball Adventure facility in Newhall lighting a smoke canister that ignited the blaze off of The Old Road early Thursday afternoon. No one was hurt, said Lieutenant Leo Bauer.

Zachary Garcia, 20, was detained by deputies and arrested on suspicion of recklessly causing a fire. The blaze tore down an outbuilding and grew to 50 acres before firefighters were able to get a handle on it.

The blaze was reportedly 60 percent contained late Thursday. The paintball facility had to be evacuated. A U.S. Postal Service office and a church near the flames also had to be evacuated but were not damaged. The Old Road remained closed near Calgrove Boulevard for most of Thursday afternoon.

FIRE NEWS OF THE WEEK.