Tragedies such as the 2013 Boston Marathon bombing, the series of coordinated terror attacks surrounding the Bataclan concert hall in Paris in 2015, and a variety of similar attacks that have happened worldwide since (most recently at the Manchester Arena) illustrate the vulnerability of special events and venues to terrorist activity. Large public gatherings are viewed as “targets of opportunity,” presenting objective means for terrorists to inflict mass injury and casualties. As a result, safety and security professionals have taken a strong interest in enhancing their methods for safeguarding these occurrences against the worst possible scenarios.

Assaults on large events and sprawling venues have used a variety of tactics including firearms, explosives, knives, and even vehicles. To date, the use of chemical weapons at large-scale events has been limited. This is likely because many of these substances decompose and dissipate quickly and would require extensive quantities and coordination to result in mass-casualty numbers in a large-scale setting such as an arena. This is the reason that military-scale chemical attacks often involve extensive barrages of artillery shells or rockets carrying large quantities of chemical agents.

Even so, chemical attacks are a highly prevalent means of destruction. Terrorist organizations are constantly finding new ways to increase the destructive potential of chemical agents to inflict maximum damage. Incidents such as the 1995 subway incident in Tokyo, during which members of a cult released sarin on multiple subway lines, killing 12 people and injuring thousands, are evidence of the devastation these substances can inflict in public places.

Although we have not yet seen chemical weapons at such events, terrorists’ manuscripts continue to encourage their acquisition and application at these large-scale gatherings, presenting an important opportunity for first responders to get ahead of these threats. With the lives of hundreds—even thousands—of citizens at risk, first responders need to be prepared to face a wider range of threats than ever before.

Unlike conventional weapons or radiological threats, there are no portals to frisk patrons or to detect chemicals from afar prior to release. What’s more, attackers are now experimenting with ways to deploy longstanding chemical substances in new, unconventional ways. 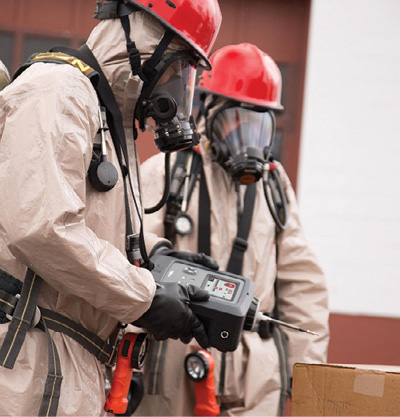 To this end, we’re seeing a sharp uptick in what’s known as the “kitchen menace,” a threat produced by combining chemicals and supplies commonly found in hardware stores to create weapons of mass destruction. With such a large range of chemicals available to build potential weapons, multiple detection technologies with broader target lists are required to identify threats accurately and confidently.

Unlike the tools available to investigate concerns of conventional weapons and explosives such as metal detectors and bomb-sniffing dogs, the response to investigate a chemical threat often poses its own risk of generating public panic. The sheer size, number, and variety of equipment necessary for chemical detection make it look like a large-scale response, making it hard to keep it discreet at a public event.

What some may not realize is that public panic can have as destructive an impact as the threat itself. In the attacks that occurred in Manchester, a bombing that killed 22 concertgoers and left an estimated 59 attendees injured, initial reports indicated that some of the injuries were the result of the ensuing stampede, not the attack itself. As those tasked with public safety, it is the job of first responders to minimize this panic and its potential damage as much as possible. One of the most effective ways to do this is to operate stealthily, which can be challenging when numerous bulky tools are needed on the scene.

Today’s first response toolkit includes a range of analytical instruments that each have a specific role, such as Raman spectroscopy, Fourier-transform infrared spectroscopy, and ion mobility spectroscopy (IMS) equipment. Although each tool has its own part to play, each also comes with its own set of limitations, necessitating the use of additional devices to confirm or further analyze a threat. For example, IMS devices are prone to high false-positive rates, notoriously alarming for nerve agents when encountering any aromatics and plastics.

Fortunately, new technologies are enabling first responders to operate more quickly and clandestinely, even for the most heinous of threats. Recent innovations such as High Pressure Mass Spectrometry™ have enabled the development of chemical detection tools that offer the same level of sensitivity and selectivity as traditional mass spectrometry technologies but in a rugged, simplified, and handheld form that can be easily and subtly deployed directly in the hot zone. You can use these devices on their own or in combination with optical point-and-shoot technologies to obtain high confidence, on-site analysis of potential chemical threats in a low profile and rapid response—a revolution poised to be a true game changer for event security.

DAVID LADD is the owner and principal of Blackthorn Services Group, LLC, and the former director of the Massachusetts Hazardous Materials Response Division.