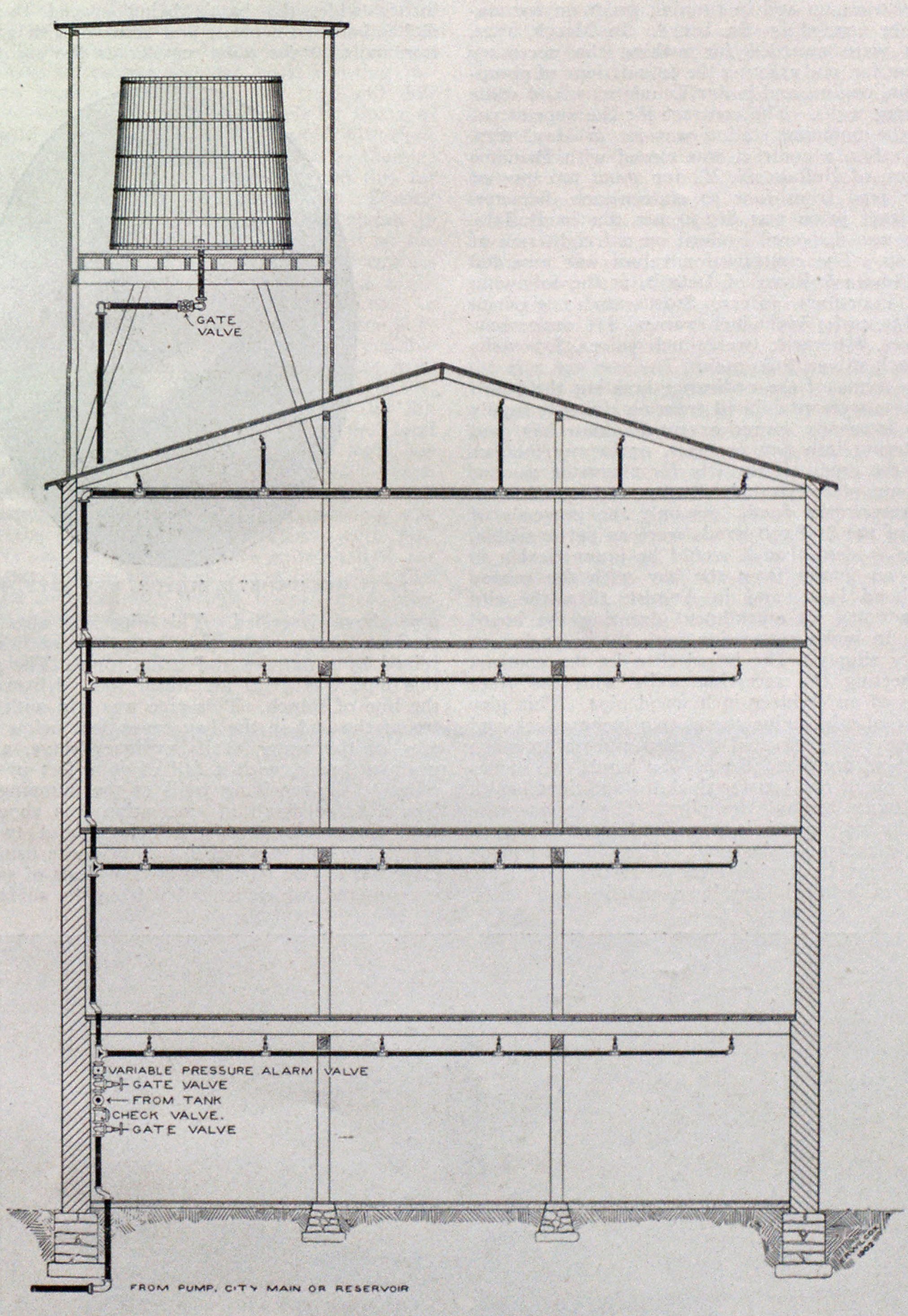 The subject now interesting the waterworks owners and managers most deeply and bearing both upon the physical efficiency and financial balances of a waterworks plant, is discussed under the heading of “Private fire protection.” The physical efficiency is one that involves the general efficiency of a waterworks plant, aside from any specific risk, in an industrial plant adopting the sprinkler system, as a primary and auxiliary protection other than that furnished by a city fire department, using the fire hydrants and regular fire apparatus of a well organised and well equipped department. In writing about this subject, I will not attempt to foresee, nor forestall new ideas that will be discussed at the convention of the American Water Works association in Detroit, this month; but my line of thought will be rather a preface to the subject, so that your readers may follow it up in reading the discussion from the Proceedings of the convention. This convention will treat upon a subject which involves conflicting interests, the waterworks,’ the insurance companies, the manufacturer of sprinkler systems, the fire departments, and the insured. These interests conflict, because each has studied its own side of the question, without proper regard to all the rights of the other, and the waterworks plants are not any less excusable than other parties at interest. For the foregoing reason, therefore, the American Water Works association has invited the attendance of expert insurance men to visit the Detroit convention, to talk over with waterworks experts the differences between them, and endeavor to reach an amicable and equitable understanding.

We all have rights that each should respect, and under certain conditions as a business and protective proposition must recognise. The physical efficiency of a waterworks plant may be impaired by a large flow of water to a sprinkler system, reducing pressure on water mains which may be required to protect other adjacent property. It is assumed, however, that a sprinkler system properly installed, and given close attention after installation, will practically stop a fire in its incipient stage. If we accept this as true, then there is no remote danger of reduced pressure on feed-mains. If, however, the fire should get beyond the control of the sprinklers, and the controling valves to this sprinkler system are not in good order, or arc located in an inaccessible place, then the hazard becomes greater to the initial risk, as well as to adjoining property.

This phase of the question is a point where the waterworks, the insurance companies, and the insured should guard well, and this can be done by a rigid insurance inspection at the time of installation. Water departments should refuse to supply water to these sprinkler systems, and insurance companies should refuse to write policies at reduced rates on these sprinkler system risks, where the foregoing precautions have not been observed in the construction of the system. A deluge of water will run through pipes that may be broken in a burning building and become a positive loss of water without rendering any protective service, and also proportional loss of pressure on the mains, unless a valve is located in the supply pipe, whereby easy and ready control may be had over the water flowing to the sprinkler system. There are many instances where water departments and insurance companies have carried such risks, and found out, when too late, that poor and indifferent inspections had caused great loss to the insurance companies, and an inefficient service by the waterworks at a critical moment, when a valve properly located and handled by a special man, intrusted with its care, would have provided favorable conditions. Indifferent inspections are accountable in a large measure for the insistence by waterworks on the introduction of meters in fire lines. The insurance inspectors are not careful to follow the instructions given them by their superiors, in some instances, and “wink at” or fail to see connections in sprinkler systems which furnish water for other purposes than that of fire protection, that impairs the system as a protective measure and allows the surreptitious use of water without cost to an industrial plant and an actual financial loss to the water department.

This condition can be remedied by a cross check upon such plants. Water companies should shut off water where these conditions are found, and insurance companies should cancel policies where sprinkler systems are “tapped.”

This “cross checking,” however, is only a substitute for the meter, which is really the best inspector and detective of water waste or surreptitious use of water.

As to its being considered an obstruction in the fire line: This must be taken relatively, and is open to further discussion at Detroit. Like the introduction of meters and mechanical filters in water departments, and the chemical engine in fire departments. these modern devices have had to outlive prejudice, because their true value is now understood and very generally accepted. And so it is with the sprinkler system. Starting out with an unfounded prejudice, it is now accepted as a firstclass auxiliary protection, and is so accepted by the insurance companies and credited upon their premium risks. In the South, where they particularly come under my notice, no cotton mill owner or warehouseman can secure reasonable insurance rates, unless their plants are equipped with this modern protective system and you will find all such plants so equipped. In isolated cotton mills, where they cannot secure municipal connection, they establish their own plant, with an Underwriters’ pump and a tank, usually placed upon a tower of the mill.

The up-to-date fire department has ceased to kick against the sprinkler system, because it extinguishes the incipient fire. The chief of a fire department prefers small losses in his report, to supposed gal lantry in a large fire loss, which is charged against his department in the total annual loss. The volunteer fire department is gradually disappearing if, not as a whole, it is partially so; and, where a city or town cannot afford a full paid department, the drivers are usually paid, with a few call men, who are subject to call at any time, and this cuts out the prejudice against the sprinkler system, by the firemen, as in “ye olden days” they so much enjoyed the credit of putting the “first water” on the fires. The sprinkler system has taken their place; and is a device on duty all the time; is ready with the “first bucket of water;” and is a practical modern utility in private fire protection.

The points at issue with the sprinkler system are proper and careful installation, rigid inspection, meterage in combination with some reliable automatic device to prevent surreptitious use of water, and valves accessible to control them promptly.