Theaters hosting stage performances by live actors were among the first buildings designed to protect the occupants in case of fire. The first designs were built in the late 1800s and included automatic smoke vents above the stage, a masonry proscenium arch, and a fire curtain that drops from above directly behind the proscenium arch to seal off the auditorium from the stage. This design was developed after hundreds of audience members died of combustion products from fires starting on stages in theaters in Europe and North America.

Despite these modern fire protection features, 603 people died in Chicago’s Iroquois Theater fire in 1903. This theater had opened in November 1903 and was located on West Randolph Street between State and Dearborn. The theater was advertised as “completely fireproof.” It had seating on three levels: the main floor with 700 seats, the first balcony with 400 seats, and the gallery (second balcony) with 500 seats for a total of 1,600 seats. One open “grand staircase” was the primary exit from the main floor and both balconies, even though the Chicago building and fire codes required separate stairways and exits from each floor and balcony level.

On December 30, 1903, during the second act of a matinee stage play performance at the Iroquois Theater, sparks from a malfunctioning arc light ignited a painted muslin drape on the stage. The theater was sold out since the weather was a typical cold and blustery Chicago winter day, with schools closed for the Christmas holiday. In addition to the 1,600 seats, there were more than 500 tickets sold for “standing room” at the rear of the theater and in the aisles for a total audience of more than 2,100 patrons.

When the arc light ignited the muslin drape, the flames ran up the drape into the “fly gallery” (for raising and lowering scenery to the stage) and ignited dozens of wood and painted fabric scenery panels stored there, waiting to be lowered to the stage at the proper time.

The stage manager tried to use primitive sodium bicarbonate fire extinguishers to control the fire, but the fire grew too rapidly for these to have any effect.

RELATED: Ceriello on the K.O. Fire Curtain ‖ Reick on Smoke Curtain Use ‖ Mittendorf on Curtain Construction

In addition, the automatic smoke vents above the stage had been locked closed by order of the theater manager to prevent the possibility of thieves using them to gain access to the building, while the reflector from a gas light fixture prevented the fire curtain from closing completely when attempts were made to lower it. The result was that products of combustion banked down onto the stage, ignited it, and spread throughout the overcrowded theater.

Further complicating the situation were the following:

Photo 1 shows the interior of a secondary school auditorium with a complete stage with fly gallery fully equipped to produce stage plays. This was built around 1930, and it is undergoing renovation. The main floor has a seating capacity of about 700 (like the Iroquois Theater), but it has only one balcony. 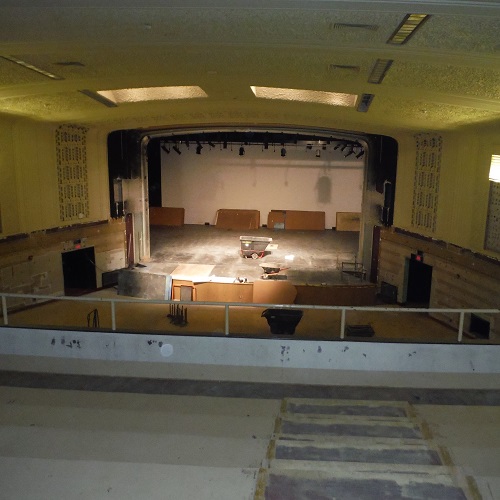 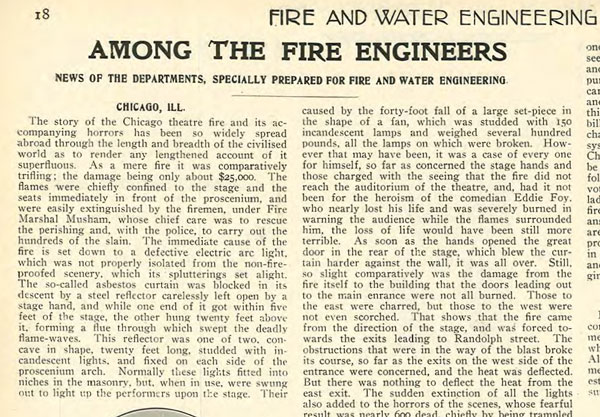 Photo 2 shows the terra-cotta masonry proscenium arch at the front of the stage with some of the fly gallery hoists (with stage lights) toward the rear. 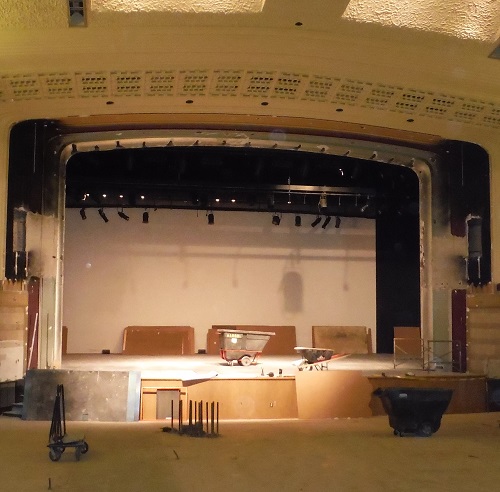 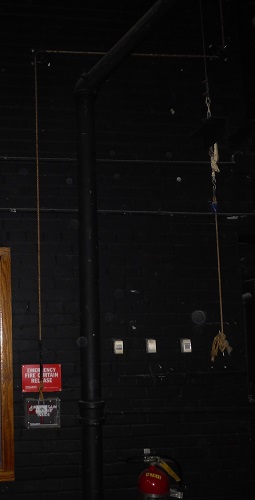 Photo 4 shows another view of the manual release and its connection to steel cables with fusible links on each side of the proscenium arch and at the top. Releasing the cable tension either manually or by a melted fusible link will allow gravity to drop the fire curtain. 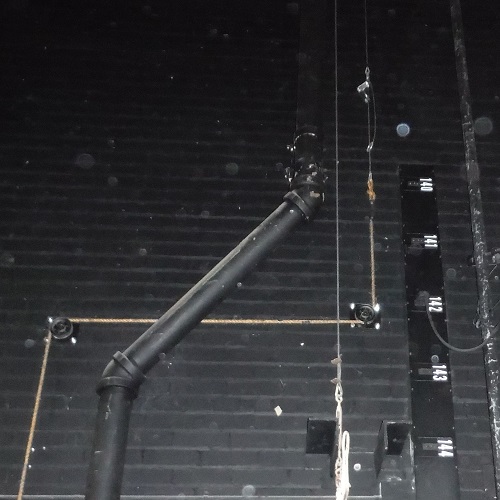 Please note that the fire curtain release features shown may not meet the requirements of present-day codes and standards for facilities equipped for theatrical production.

A modern theater with a stage equipped for theatrical production will have an automatic proscenium fire curtain; exit and emergency lights, an automatic fire sprinkler system above the stage, in the fly gallery, and in all storage and shop rooms surrounding the stage; automatic smoke vents above the stage; and exit doors with panic hardware that open outward. In addition, they may have smoke and heat detectors, a fire alarm system, Class III fire hose standpipes on the stage, fire-retardant treated scenery and props on the stage and in storage, automatic fire sprinklers in all seating areas, and fire-retardant treated audience seating.

For a complete discussion of these requirements, see the following: