Answer: If the second duplicate line were attached to a pumper, the engine pressure would not have to be increased, but the speed of the pump would have to be stepped up to give the additional flow.

For identical layouts, identical engine pressures are required to give the same nozzle pressures.

I recently read in a magazine article that the Navy was using foam made of animal blood. Is this true?

“I am afraid that this is largely another case of the ‘wayward press’ getting ‘slightly off the beam.’

“The facts briefly are as follows: As you well know, the Navy has for some time past been using a liquid foaming agent in producing the so-called mechanical types of foam. In this respect, we have been quite successful. The rapid and continued expansion of the Navy put a very heavy drain on the production facilities of our available source of supply of this material. As a consequence, we started to investigate another protein that could be used for manufacturing foam liquid. In the course of our investigation, Armour and Company submitted a protein made from animal blood. We tested this at one of the fire schools and determined that we could make foam, but the present state of the art had not been developed to a point where we were willing to accept it as comparable to our present product. Other than the test specimens referred to above, the Navy does not use any foam solutions made from animal blood.’’

Answer: Answering Question 1, the back pressure at each engine will be 888 pounds, where the two engines are independently siamesed into the standpipe.

The pressure at the Siamese connection is 338 pounds due to the elevation of the water in the standpipe, and this pressure would he exerted against any or all engines which attempted to force into the standpipe.

2. The capacity at which the first pumper must operate is only determined by the nozzle tip, and the desired nozzle pressure. The first engine can only give what water passes through the second engine on to and through the nozzle. Hence, the quantity of water that the second engine can discharge through the layout is the same quantity of water that the first engine must supply to it; neither more nor less will answer.

Should there he a variance in the actual horse-power as stamped on the motor by the manufacturer and the S. A. E. horse-power as determined by the formula: Bore x Bore x No. of Cylinders / 2.5 ? J. E. S.

Answer: The horse-power stamped on the pumper is probably the brake horsepower. This differs very much from the horse-power of a motor as determined by the S. A. E. formula.

The S. A. E. formula was originally developed by the Association of Licensed Automobile Manufacturers. When this organization went out of the picture, the Society of Automotive Engineers took over and endorsed the formula. It is, as you state: H. P. = D2 X N / 2.5, where D is the diameter, or bore, of the cylinder; N, the number of cylinders, and 2.5 a constant.

This formula is based upon an assumed piston travel of 1,000 feet per minute, and a mean effective pressure of 90 pounds per square inch in the cylinders.

With the change in design to high speed, high compression motors, the S. A. E. formula’s accuracy, of course, drops.

Brake horse-power of a motor is determined by the use of a prony brake, or a dynamometer, which actually indicates the horse-power delivered by the motor, no matter how many cylinders it has nor what the dimensions of the cylinders. 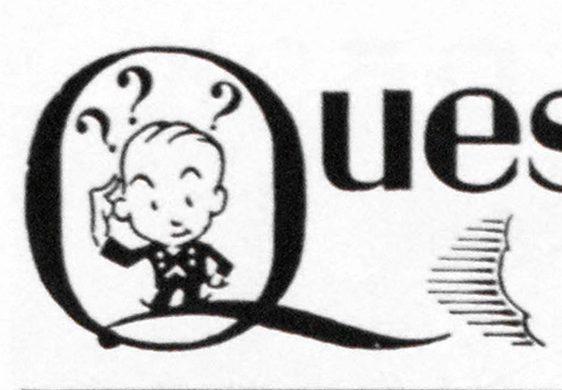 NOTE—Readers are invited to send in questions, which will be answered in the order received. Names are omitted from questions unless otherwise specified

When should a relief valve be used on a fire hydrant?

Is it modern practice to use such valves on hydrants? L.K.W.

Answer: Where high pressure hydrant streams are being used, it is good practice to use a pressure relief valve.

For example, if a shut-off nozzle at the end of the line of hose were closed quickly, while the line were operating under the full main pressure, there might be danger of rupturing the main, or some connection to it, by the water hammer created through quick closing of the shut-off nozzle.

There is just as much reason for using a relief valve at a hydrant supplying a hydrant line, and where the pressure in the system is high, as there is in using a pressure relief valve on a pumper.

Is the water pressure the same on the bases of both containers, namely, 4.34 pounds per square inch due to the same head of water?

However, I think that the pressure in “B” container should be considerably less than “A” because I understand that static pressure is due directly to the pressure created by the weight of water. In “B” the weight of the l0′ x 1″ x 1″ column of water is equally distributed along the 10foot base. This should greatly reduce the pressure below the 4.34 pounds per square inch of “A” container. F. L.

Answer: The pressure per square inch on the bottom of container “A” is identical with that of container “B” as long as the depth of water in each is the same. The old rule that “Pressure applied to a confined fluid at rest is transmitted with the same intensity in all directions,” holds in this case.

Do you know that it is theoretically possible to burst a beer key with a pint of water, provided the keg is completely filled with water and a small pipe is extended upward sufficiently far. Assume that the pipe was 200 feet high, and that the pint of water just filled it. This elevation of water would create a pressure on every inch of the interior of the keg of approximately 86.8 pounds. Such a pressure naturally would burst the keg. And yet a pint of water weighs approximately but two pounds.

Bulletin 62 issued by the National Board of Fire Underwriters contains some statements relative to the carrying capacity of 2 1/2-inch hose that are rather confusing to me. It states as follows:

Answer: Apparently the author of the Underwriters’ Bulletin to which you refer made his comparison on the basis of friction loss in lines rather than on the basis of the cross-section area of the hose.

If hose lines are fairly near to each other in diameter, a comparison on the basis of cross-section area is satisfactory.

However, if the lines vary widely in diameter, then a comparison on the basis of friction loss gives much better results.

Calculations for 1-inch and 1 1/2-inch hose as compared with 2 1/2-inch, gives results quite close to those offered by the Underwriters’ Bulletin. Therefore, it is evident that they have compared the lines on the basis of friction loss rather than on cross-section area.

In Example 138 on Pages 113, 114 and 115 of “Fire Service Hydraulics” please explain the discrepancy between the average nozzle pressure of 45.8 pounds on Page 114 and the average as obtained from the two nozzle pressures of 44.7 pounds and 36.8 pounds on Page 115. Another question deals with the values of “K” on Page 68, which is either more or less than the value obtained by using the formula D4 divided by 10. The third question refers to problem 107 on Page 83 and asks why the nozzle pressure plus the friction loss does not equal the engine pressure.

No doubt there is a reasott for these discrepancies, but I have not been able to find the reason in the book.

In trying to explain the proper procedure for pumpers in relay and using the information as given on Page 139, I was asked the question “How is the engine pressure as specified determined in the first place when the pressure is the governing factor in the placement of the second pumper in the relay?” Is the pumping pressure as defined on Page 139 a matter of “guess” or is it determined by a field procedure in order to know when to use 150 pounds or 250 pounds? Of course, after the engine pressure has been decided upon, then the formula for placement of the second pumper can be easily worked out. I ventured a guess that in order to obtain these pumping pressures you would take the pressure that would bo required by a single engine to pump the whole layout and then divide the obtained pumping pressure by two and then use the results as a basis for determining the placement of the second pumper. Take Example 156 on Page 140. the required pumping pressure for a single engine would have been 311 pounds, which, divided by two, would give you 150 pounds, and then use the procedure as defined on Page 139.

Answer: The dicrepancics between the average nozzle pressure of 45.9 pounds on page 114 and the average as obtained from the two nozzle pressures of 44.7 pounds and 36.8 on page 115, is due to the fact that in the second calculation, one line is shorter than the other. As one of the two lines is shortened, the flow increases therein, and the friction loss increases per hundred foot not directly as the flow but as the square of the flow. A drop in pressure in the short line will therefore be greater than its length might indicate. Decreased nozzle pressure on the line results.

Conversely, with increased length of line, the friction loss per hundred feet drops and we have a greater nozzle pressure than we might expect.

However, in the problems you cite the error is actually less than five per cent. For example, if we take five per cent increase in open butt pressure, we will have pressure of 3.08 pounds approximately. At this pressure the discharge will be approximately 293 gallons per minute, and the friction loss per 100 feet of 2 1/2-inch hose at this flow, 20.325 pounds. The friction loss per 1,000 feet will be 203.25 pounds. Adding to this the open butt pressure we’ll have an engine pressure of 206.33 pounds.

Thus, you will note, the error is less than five per cent, as we used an increase in nozzle pressure of five per cent in the above calculations. Such a small error speaks well for the accuracy of this empirical formula.

In determining the engine pressure when figuring the location of pumpers in a relay line, it is up to the student to estimate whether or not the pressure will be within the 120, 150, etc., pound range. However, your method is about as good as any in arriving at this figure.

Ten persons were burned to death and twenty-two others were injured in the flaming wreckage of a bus in St. Louis, Mo., recently.

The Public Service Company bus and an automobile collided. The bus carreened off a parked car and, hurtling the sidewalk, smashed through a 200gallon fuel oil storage tank which exploded, enveloping the bus in flames as it plunged into the brick wall of a tenement.

Terrorized passengers stampeded for the exits The rear door jammed after a few of the passengers escaped and the others couldn’t open it.

Two witnesses rescued many of the panic-stricken passengers who were attempting to fight their way from the blazing bus They broke several windows and pulled seven persons to safety.