(Specially written for FIRE AND WATER.)

JUDGING from appearances, the rapid transit road will be completed within the appointed term of three years. The roadway will be partly tunnel—that is, bored through earth or rock; partly subway—that is, under a street aud closed overhead ; and partly elevated—about five miles being of that character. The motive power will be electricity, which will also serve for lighting purposes. The subway’s construction resembles that of digging a long aud continuous cellar fifty feet wide and carried to a depth in keeping withthe level agreed upon—at some points not deeper than twenty feet; at others, quite 150 feet below the surface. The trench itself is fifty feet wide, except where additional room is required for the stations, of which there will be thirty-one in Manhattan and the Bronx between the Postoffice and Dyckman street. There will be elevators by which the passengers will be taken to and from the platforms at Manhattan valley, One hundred and Sixty-seventh street,and One hundred and Eighty-first street. At all other stations passengers will go to the ears by a staircase, and in no instance will the track be more than about sixteen feet below the street level. The entrances to most of the stations will be fourteen feet above the tracks. The subway will be lined its entire length with concrete, and this will be puinted white. At the stations the sides will be finished with tile and glazed brick.

The main line-runs from the Postodice through Elm street to Astor place, under fourth avenue to Fortysecond street, where It turns west to Broadway, to Washington Heights and Fort George. At One Hundred aud Third street a branch runs east under Central Park and under Lenox avenue to One Hundred and Forty-first street,thouee either across the river by a bridge or under it by a tunnel to the Bronx park. There will be four tracks on the main line to One Hundred aud Fourth street, whence to One Hundred and Sixteenth street there will be three, and thence to the north end only two, The elevated portion of the road will be as follows: Its first lofty section will be at Manhattan valley, between One Hundred aud Twenty-second and One Hundred and Thirtythird streets. At this point the depression in the earth is so great that, when the track emerges from the sulway it must be laid on an elevated structure to keep its level. From One Hundred and Ninety-fifth street to Bailey avenue, a distance of about one and one-half mile, there will also be an elevated structure, and on the East branch from the Harlem river to Bronx park the same condition exists. After reaching Broadway the road will all be on the West Side until One Hundred and Third street is reached, where the branch to Lenox avenue begins.

The character of the work differs iu nearly each division. At Washington Heights and on each side of them the excavation is through solid rock, as it is on the Lenox avenue division through Central Park, Central Park West,One Hundred and Fourth aud One Hundred and Third streets to Broadway (the Boulevard). In many cases the work has necessitated the lowering and diverting of sewers, on which $753,000 and more has been spent, the removal and replacing of large water and gas mains, subway conduits, and the like, as was seen at Bleecker, Canal, aud Elm streets, and in perfection at Forty-second and Fifty-ninth streets. Especially at the latter point can a good idea be gained of the obstacles which the builders of the underground structure have to overcome. Several points along the line us they exist now are of interest. At the Fiftyninth street circle there is a deep cavern, in one part of which the structural metal has already been placed in position on the concreted floor. Only a short distance from that point one may see where pipes of various sizes are being held in place by braces and chains. Many of these pipes are “in service,” and the task to work round them and keep them intact until they may bo relnid or removed is no small one.

One of the most formidable pieces of work on the line is being done where no one except those who are employed in its construction can see it. This is the section of tunnel work from Thirty-fourth street to Forty-second street, by way of Park avenue. The tunnel is being constructed in two sections. These twin tunnels, as they are called by the engineers, are being cut through the solid rock thirty-five feet below the street level and under the tunnel through which the surface cars run. Occasionally one may hear the report of exploding dynamite in the vicinity of the work; but, with that exception, little of the mining work which is going on in that part of Murray Hill is known to the people who live in the vicinity. The tunnels will be seventeen feet apart and about sixteen feet high.

The tunnel work near One Hundred and Fifty-seventh street and the shaft aud tunnel operations near One Hundred and Eighty-first street are also of a formidable character; but, considering the fact that the Park avenue twin tunnels are being constructed underneath the street car tunnel without in auy way interfering with the surface traffic gives that part of the work unusual interest in the eyes of the public.

The illustrations accompanying this article show the excavation through rock at One Hundred and Fiftyseventh street, looking south in Broadway; an interesting contrivance at One Hundred and Fourteenth street, where there is an electrically operated apparatus for hoisting and carrying the rock and other material from the excavation ; and the work already alluded to at the Fifty-ninth street circus—work which has to be carried on without interfering with the electric trolley cars, which are constantly passing und repassing in all directions, and without necessitating the temporary removal of the Columbus monument, whose shored up foundations can be secured only by their being rebuilt on columns from below. 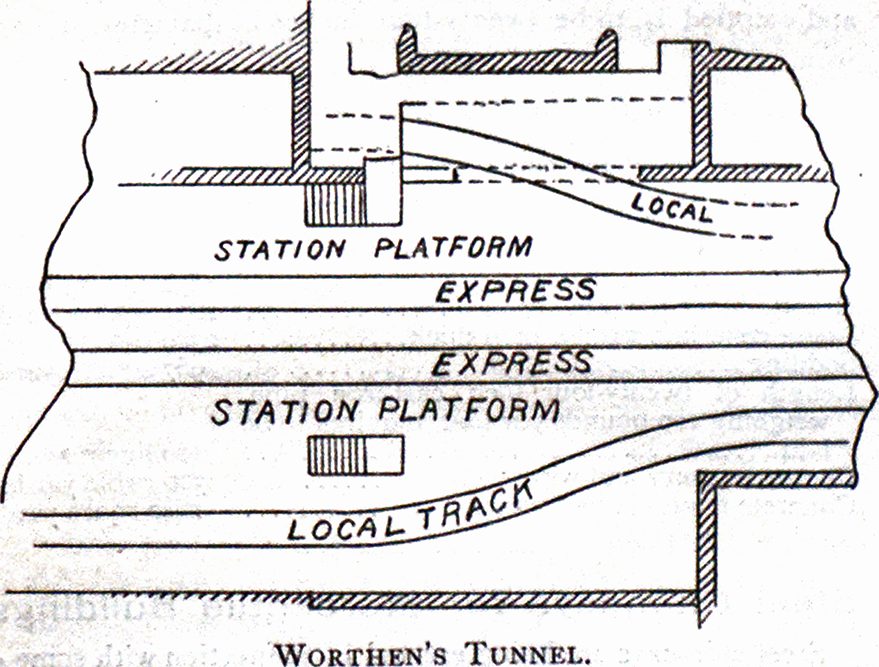 For a considerable time past the New York Rapid Transit Commissioners have had under consideration two plans for the construction of rapid transit roads. Finding themselves unable to agree, they recently engaged four expert engineers to assist them in coming to a conclusion. The report of these engineers will, it is stated, probably be made now very shortly.

One of these plans, which was submitted by the commissioner’s senior, Engineer W. E. Worthen, we illustrate herewith. It embodies the construction of a tunnel with four tracks, on a level, the roof being so far below the surface of the street as to avoid any disturbance of’the network of pipes for various purposes, which underlie Broadway. The majority of the opinions obtained by the commissioners w’ere in favor of Mr. Worthen’s scheme, and it is considered as almost certain that with some modifications it will be adopted.

The roof of the tunnel will be nine feet on an average below the surface of the street. The height of the tunnel will be eleven feet six inches and the distance between the two sides forty-four feet. At some places, where Broadway is narrowest, that will necessitate going a little inside of the curb lines. Wherever practicable the present walls of buildings will be utilized to form the sides of the tunnel after they have been strengthened wherever necessary. Iron columns will be used to support the girders on which the roof plates will rest. The whole structure will be made water tight. Fans placed midway between stations and operated by electricity will be used to keep in motion currents of pure air.

The two inner tracks will be used for express trains and the two outer tracks for way or local trains. Where express stations are placed the width of the tunnel will have to be increased and the way tracks will describe an outward curve to admit of the placing of a platform between them and the express tracks. How that is done is shown on the plan. The two cross-sections show the arrangement of the tunnel at local and express stations. The average depth to which passengers will have to descend to reach the platforms is about twenty feet. Where that depth is exceeded elevators will be employed. The designer thinks that such a tunnel could be built from the Battery to Forty-second street in two years.

The second plan, which has occupied the attention of the commission, was presented by W. Barclay Parson, whose scheme, generally speaking, provides for the building of two ‘double-decked” tunnels, with a gallery between them to contain the water, gas and other mains, and the electrical wires. As he describes it, it embraces “ four tracks, set in pairs, one track above the other, the upper tracks to be for local and the lower for express service, with a gallery or chamber between them of sufficient size to contain al) the pipes and wires now located beneath the surface of the street, and to contain besides, those that are likely to be added in the near future, with the possibility of further extending this chamber to any desired extent.”

This pipe gallery is a strong feature of Mr. Parson’s plan and one that will strongly commend it to some people. When the pipes are once put into it, it is contended that it will never again be necessary to disturb the surface of the street to get at them. Mr. Parson declares that he can so construct his double-decked tunnels that it will not be necessary to take possession of more than one-quarter of the surface of the roadway at once, and that while the building is going on the cable on Broadway can still be operated.

The roof of his upper pair of tunnels is something less than three feet below the surface. They arc ten feel high and twelve feet wide in the clear. To get to the platforms for local trains passengers would not have to do so much climbing as is required in Mr. Worthen’s tunnel. But to reach the platforms of the express trains the distance will lie something greater—twenty-two feet below the surface, on an average. One advantage claimed for this system is that it requires no divergence of his local tracks to admit of the introduction of a central platform at express stations.