A fire which destroyed the Frances apartments, south of Central Park in Lansing, Mich., recently broke out at 12:30 A. M. from unknown cause, but it is thought probably from an overheated furnace. The building, which was four stories in height, constructed of hollow tile brick finished in stucco, about 50 x 200 feet, had been built about six years. The first alarm came in 1:19 A. M„ the fire evidently having hurned for fifty minute, and when the department arrived under the command of Chief Hugo R. Delfs, numbering sixty men, the entire length of the rear of the building was all in flames. The department devoted its first energies to rescuing the tenants, who, in spite of the early hour of the fire, were all safely taken out of the building. The apparatus in service at the fire were one Robinson, two Seagrave and one Webb pumpers, one Seagrave 85-foot aerial and one Seagrave city service truck. There were four 6-inch double hydrants available, spaced about 400 feet apart, the pressure at the hydrants being about sixty pounds. Seven engine streams were thrown, with nozzles of 1 1/8 inches, supplied by a 14-inch water main. Only 3,900 feet of cotton rubberlined hose were laid. Smoke helmets were brought into service by Chief Delfs with good results in rescuing the tenants. The fire burned about seven and a half hours. The value of the building was $100,000, with a loss of $85,027; and on the contents, coinsisting of household goods, valued at $80,000, the loss was $31,000. 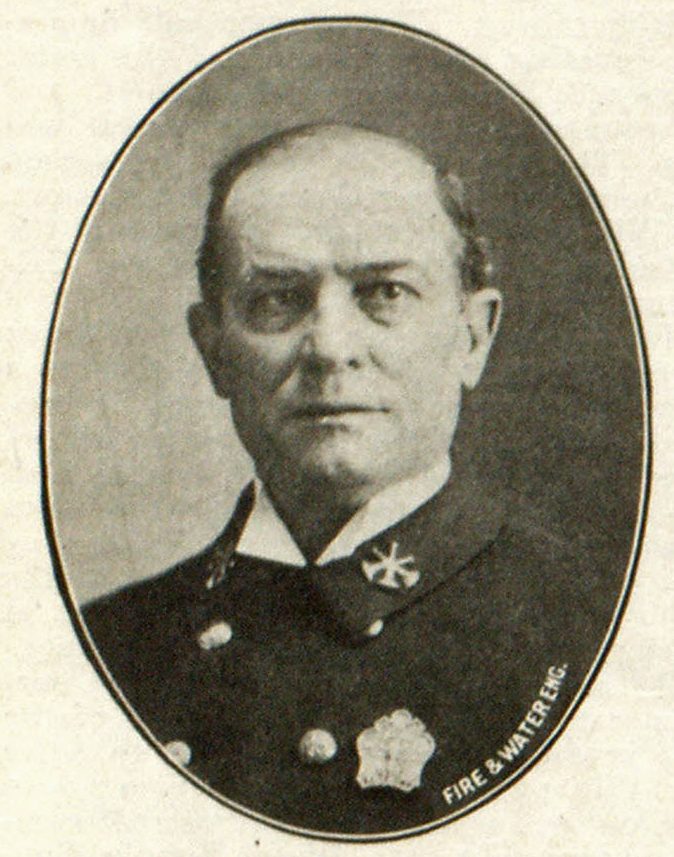 An old, three-story building, on which a new front had been constructed, housing the photograph gallery of E. G. Herrick on the upper floors and the Cable Piano Company on the first floor, situated in the congested, high pressure district of Toledo, Ohio, caught fire recently on the third floor from an overheated water meter. The structure was 25 x 120 feet in dimensions, of brick, with wooden walls and with a fire escape in the rear of the building. The alarm came in from a street box at 2.08 A. M., and upon the arrival of the department under the command of Chief L. H. Elling, the flames were coming through the roof. The number of men at the fire was thirty-five with four chemical and hose, and two ladder trucks. There were ten hydrants available, spaced an average of 150 feet apart with 175 pounds high pressure, and 50 pounds low pressure, the mains being 10 inches. There were five high-pressure and, one low-pressure streams thrown with nozzles of 1 1/8 and 1 1/4 inches. The amount of hose laid was 2,700. The system, both high and low pressure, is direct pumping. By the use of the high-pressure system, the fire which seemed, to threaten the entire building was confined to the third floor, the place of origin, the further damage being principally by water. The loss on the building, which was valued at $50,(XX), was $5,000, and that on the contents, valued at $80,000, was $40,000.

The Speedwell Fire Company, of West Lebanon, Pa., has been organized and Cyrus Gross was elected president.