Scenario: Your medic has been asked to respond to a residence in your first-due area known for high drug use and frequent overdose calls. Dispatch advises that law enforcement is on scene with a suspect who is having a medical emergency. They advise that she is unconscious but breathing and is a known drug user and drug dealer.

This scenario is playing out with increasing frequency across the country. The past 15 years has seen a significant increase in medical emergencies as a result of opioid overdoses. However, instead of heroin being the primary cause, prescription drug overdoses are more common. The signs and symptoms have not changed. However, there has been a significant change in the methods for treatment of opioid overdoses that impact a provider’s approach to these incidents.

Heroin is an opioid that is synthesized from morphine or the naturally occurring substance pulled from the opium seed pod. Heroin can be injected, smoked, or inhaled through sniffing or snorting and produces a rapid high because of its quick travel to the brain. This quick high increases the probability of addiction in people who use the drug. Opioid misuse, especially heroin, has significantly increased over the past few decades; a recent study found that in 2011, 1.6 percent of Americans ages 12 and older had tried heroin. Additionally, a more recent study found that heroin abuse had doubled since 2002. With the increased abuse of heroin and other opioids, there is an increase in the number of emergency calls as a result of overdose.

Signs and Symptoms of Opioid Overdose

When a person has misused his opioid, whether it is prescription (i.e., morphine) or illegal (i.e., heroin), the signs and symptoms are similar. Patients may experience pinpoint pupils, respiratory depression, and altered mental status. In severe cases, the patient may experience respiratory arrest and unconsciousness. Table 1 lists some of the most frequently prescribed opioids. 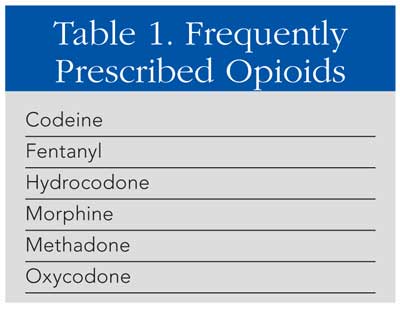 Scenario: You are met outside by a law enforcement officer who states that, on arrival, he found a 24-year-old female unconscious and unresponsive with a large amount of drug paraphernalia around her and a needle in her hand. He advises that the scene is secure and escorts you into the appropriate room. As you approach the patient, you prepare yourself for standard signs and symptoms of a drug overdose. However, what you find is unexpected: The patient is coming to and appears to no longer be impacted by the effects of the opioid. A second law enforcement officer advises that he administered Narcan® (naloxone hydrochloride) just prior to your arrival.

Naloxone hydrochloride is a synthetic derivative of oxymorphone and acts as an opioid antagonist. When administered, it “prevents or reverses the effects of opioids including respiratory depression, sedation, and hypotension.” Because Narcan displaces the opioid from the opioid receptor in the nervous system, there is a potential for side effects similar to withdrawal symptoms when Narcan is administered. Table 2 provides a list of the potential side effects. 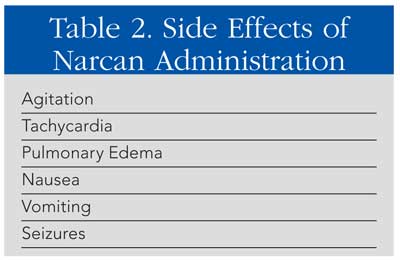 Before a provider can begin treatment, it is imperative that he has ensured that the scene is safe. A patient who is experiencing the effects of an opioid overdose may present a physical threat to the emergency responders. If this is the case, law enforcement should help subdue the patient so that he is no longer a threat. When personal safety is ensured, focus on the most immediate treatment of opioid overdose: airway, breathing, and circulation (ABC).

Airway. With a potential for altered mental status given a significant enough overdose, it is possible that your patient will be unable to maintain his airway. If this is the case, basic life support (BLS) providers need to consider the immediate need for a nasal trumpet or oropharyngeal airway. This will ensure that there is access to the airway if further interventions are needed. For patients who have progressed to unconsciousness, advanced life support (ALS) providers should consider endotracheal intubation. Along with the need for airway access, there is a potential for aspiration, which can be better controlled with advanced airway placement.

Breathing. With a secure airway, the emergency medical services (EMS) provider can begin to assess and treat breathing problems caused by the opioid overdose. Because an opioid overdose can cause respiratory depression, assessment of the patient’s respiratory rate, rhythm, and quality is a high priority. If the respiratory effort is considered insufficient to support life, conduct artificial ventilation with an ambu bag with high-flow supplemental oxygen. Additionally, with the potential for vomiting, make portable suction immediately available.

Circulation. Opioids do not have a significant effect on the circulatory system. However, as the patient becomes more altered and the body continues to experience the effects of the opioid overdose, it is highly probable that the patient will go into cardiac arrest. First responders should be prepared for cardiac arrest.

Intranasal administration of Narcan. A recent increase in the use of intranasal (IN) Narcan as a treatment for opioid overdoses in the field, most especially, the possession and administration of IN Narcan by law enforcement officers, has created a significant debate in the appropriateness and effectiveness of the treatment. IN Narcan works like IV Narcan, but it is given as an aerosolized spray through a nasal device. As with other drugs, the dose of Narcan given intranasally is determined by the medical director.

Advantages of IN Narcan administration. Although studies have not found a significant difference in the effectiveness of Narcan-whether administered intranasally or intravenously-there are recognized advantages to using IN Narcan administration techniques. One major advantage is the decreased potential of needle stick injuries and bloodborne illness exposure. With the potential of overdose patients presenting as combative, there is an increased possibility of a stick if IV access is needed for medication administration.

An additional advantage to using IN Narcan is the ability for laypeople to administer the medication to those who need it. Because the side effects of Narcan are minimal, laypeople or others who are not medically trained can provide necessary medical care prior to EMS arrival. Because of the effectiveness of the IN administration of Narcan, many law enforcement agencies have created policies and procedures allowing officers to carry and administer IN Narcan when they respond to an opioid overdose. The belief is that, with Narcan’s limited to nonexistent side effects and law enforcement’s ability to ensure a safe scene prior to EMS’s arrival, there is a logical need for them to carry the antidote.

An Internet search on Narcan use by law enforcement agencies will yield a large list of agencies that allow its officers to carry and administer Narcan. However, there is concern that law enforcement officers are not trained to understand the potential issues that may exist if the patient is suffering from an emergency other than an opioid overdose.

Scenario: With the patient regaining consciousness, you begin your assessment as you would any emergency-with the ABCs. With your partner’s assistance, you package the patient for transport and speak with law enforcement to ensure that they have the information they need prior to transport. After loading the patient in the truck, you secure IV access, monitor her vitals, and continue to reassess her until you reach the receiving hospital.

With improvements in medication and medication administration and a better understanding of the effects of various medications, the methods for handling various medical emergencies will change and adapt. Although some of these changes may cause controversy or raise questions, the ultimate goal of any change in patient treatment is to ensure that you provide the best patient care.

KAREN OWENS is the emergency operations manager for the Virginia Office of EMS, where she has been employed since 2001. Her duties include oversight of the emergency operations training programs including mass-casualty incident management, terrorism awareness, and vehicle rescue. Owens has a BA in psychology and a MA in public safety leadership. She is a Virginia-certified firefighter and has been a Virginia EMT-B instructor since 2002. Owens is the author of Incident Command for EMS (Fire Engineering).

NTSB: Driver Behind Wheel at Time of TX Tesla Crash