More
Home Firefighting Tailboard Talk: Why Do We Play the Blame Game? Let’s Turn It...
Facebook
Twitter
WhatsApp
Linkedin
By Craig Nelson and Dane Carley
Where We’ve Been
Building a higher reliability organization (HRO) means employing multiple, complex concepts. Therefore, we thought it would be easier to see where we have been so far and how those ideas fit into the HRO idea by placing the article topics into a familiar chart. We are going to use something similar to an incident command system (ICS) organization chart to illustrate what we have covered and how it fits into the HRO idea. 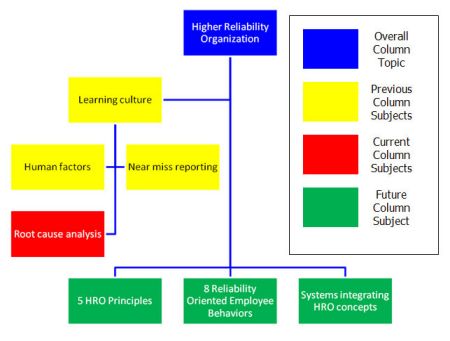 Root-Cause Analysis and the Chain of Errors

Figure 1. This represents a traditional chain of errors based on the lessons learned from this incident.

Figure 2. This represents a chain of errors working backwards from the traditional chain of errors to find the root cause of the problem.
We were not involved in this incident and do not know the department, so we are making assumptions based on the near-miss report to illustrate our point.
It is possible to see, when simply illustrated, that the behavior (performing unsafe activities) leading to the injury was generally applicable across many different types of responses. The firefighters performing the unsafe behaviors are likely to do so in other tasks based on an “aggressive, take action-oriented organizational culture.” It is also easier to see that the specific symptoms of unsafe behavior and weak incident command are part of a broader deficiency in the organizational culture influencing the behavior. Additionally, this helps illustrate human factors described in Tailboard Talk: Human Factors. The best part of performing a chain of errors in this manner is that we can also see that there are general behaviors creating an environment conducive to the unsafe behaviors. As a training officer, it becomes more effective to design a program addressing the fundamental behavior of being overly aggressive and the action-oriented culture because it is likely that personnel exhibit these behaviors on every type of call to which they respond (e.g., fires, car accidents, lines down, gas leaks, and so on.). On the other hand, a program designed specifically for the incident described above based on the lessons learned is more specific, particularly the building construction lessons, to a structure fire.
Case Study and Exercise
We would like you and your crew to look at the following near-miss report, #10-0001257, from www.firefighternearmiss.com. After reviewing the near-miss report, create a chain of errors like the one above to find a root cause. Obviously, you and your crew need to make some assumptions based on your experience and typical fire service culture to work backwards. What would be the contributing factors if this near miss incident had happened in your department?
Event Description
We had a warehouse fire called in for smoke showing. When we arrived, my sergeant told me to pack out and see if we could knock it down. There was flame showing in the back right corner of the building and propane and welding equipment exploding and causing pop-off valves to go off.
We decided to make entry to try to contain the fire and cool off the structure. When we tried to make entry at the side door, it flashed on us. We tried to fight it and back up. While in the doorway, about three feet back, we were still trying to fight it. I then noticed my air was hot and my face piece was starting to melt. We decided it was too late, and that we should start on a defensive attack.
When we backed out, we started peeling out of our gear because it was hot. The sergeant told me to stay there and he would be right back. He went to back the truck up due to radiant heat, and I only had on bunkers. Not paying much attention and due to miscommunication, he didn’t return as he said. He thought I had returned to the front.
I then heard a loud explosion and turned to look at the structure. Being only about 15 feet from the building, I saw a cloud of puffy smoke shoot out at me. I pulled my turnout jacket up, and the smoke and fire rolled over me. It then sucked back into the building, and I jumped up and ran. As I was running, I could hear the building falling. I fell about 10-15 feet away after running, and the wall hit right behind me. Needless to say, it scared me half to death.
I was picked up by a couple of rookies who were trying to get to me and saw it happen. They checked me out and got me away from it as I started to realize my arm had been burned through my jacket when I hid under it. My face had also been burned from the mask when it melted. I was treated and released from the hospital.
Lessons Learned
Discussion Questions
1.       As mentioned in Tailboard Talk: Near Miss Reporting, firefighters tend to share fundamental personality traits or exhibit certain behaviors including

Did your chain of errors lead to a root cause related to any of these traits or behaviors?
2.       In your experience of reviewing line-of-duty death investigation reports, does the National Institute for  Safety and Health (NIOSH) Fire Fighter Fatality Investigation and Prevention Program seek out the 80-percent causes of accidents, including human factors and/or root causes, or do the reports focus on the 20 percent that have always been the focus?
One possible chain of errors for the near-miss exercise above:

Cyanide Antidote Cited in Saving Man’s Life After OR Fire