Visitors to the forthcoming conference of the International Association of Fire Chiefs at Grand Rapids, Mich., will have the opportunity of viewing many new developments in fire apparatus and equipment. A novel idea used by the Grand Rapids Fire Department is well worth a second look.

The rescue squad employs peg-board panels fitted with canvas webbing as a convenient means of storing small hand tools in a neat and orderly fashion. Not only does this method facilitate fast visual survey of the equipment, but it also permits more efficient use of the storage capacity of the vehicle’s compartments. It is a good example of the old master mechanic’s saying, “A place for every tool and every tool in its place.” 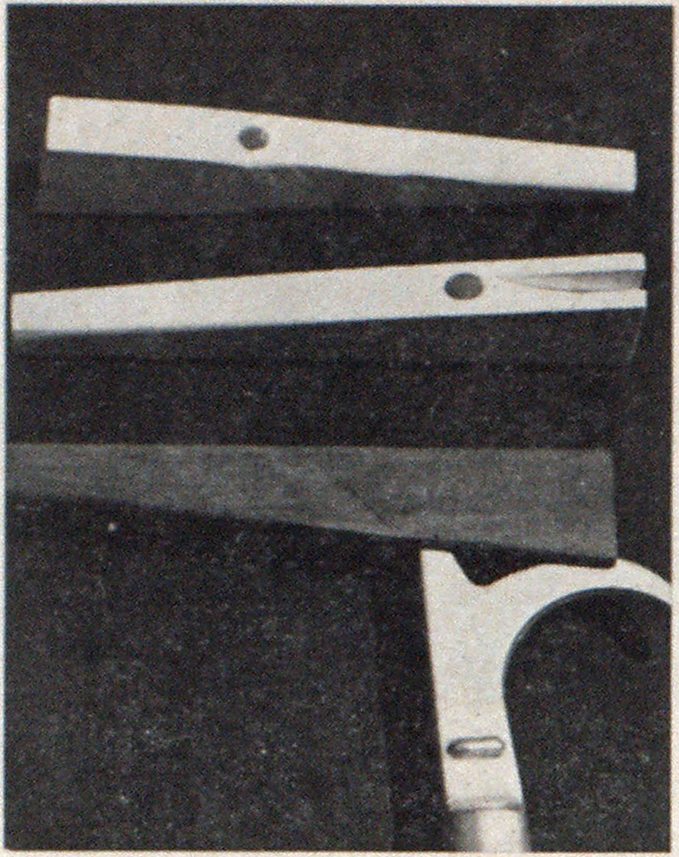 The Miami, Fla., Fire Division is now employing a new idea for plugging individual sprinkler heads during fire or salvage operations. Developed by the combat section in conjunction with the fire college, it consists of a wooden sprinkler wedge made to fit the pike of a pike pole. The wedge can then be inserted into a discharging head more rapidly than by previously used methods.

The wedge is milled to fit the point and the underside grooved to fit the curved portion of the pike to prevent it from turning when being inserted. After the wedge has been placed between the discharge orifice and the deflection plate it can be tapped into a more secure position by the pike pole.

This method was developed primarily for speed and ease of operation and to preclude the necessity of using ladders to reach ordinarily inaccessible installations. The procedure has proven quite successful on several occasions, and an adequate supply of wedges have been distributed to all companies.

The Long Beach, Calif., Fire Department has employed the “Wallace HiTest” hose-testing manifold developed by Master Mechanic A. A. Wallace for several years.

Due to its simplicity, it is said to have reduced the hose testing time about 75 per cent since several lengths may be tested simultaneously. It may be used with the regular piston-type hose test pump or in conjunction with the high or low-pressure pumps of any pumper. It may also be used with 2 1/2-inch, 1½-inch or booster hose, as little water is used after hose lengths have been filled.

Nozzles with 1 ½-inch tips are attached to the male butts to facilitate ease in handling and to prevent loss. The main manifold may be from 2-inch to 6-inch pipe with 2 1/2-inch fittings which may be reduced as required.