Not long ago an important section of Sioux City, Iowa, was destroyed in a serious conflagration that wiped out a considerable portion of its business centre. It further threatened to lay waste all of the fine modern buildings for which the city is noted, but that a lucky turn came, as the firemen under Chief George M. Kellogg, were able to make a break in the fierce flames, when hope had almost given place to despair. At that time the city had no fire apparatus except some five hose wagons and chemicals, and although the pressure furnished by the waterworks was ample under ordinary circumstances, it was not to be expected it could meet the abnormal conditions that existed at this fire. Strange to say the lesson then taught those responsible for the city’s fire protection, only one Nott steamer has since been added to its equipment. That the fire loss, under existing circumstances. has been kept down so low is most creditable to the ability of its chief. The present equipment of the department is one Nott steamer, three chemical engines, five hose wagons, two Eastman’s Deluge sets and a city truck. The Gamewell fire alarm system has forty-three boxes and is modern in most respects. This then is the full equipment of a flourishing city of fifty thousand inhabitants, which, even to the uninitiated, must appear inadequate. The paid force consists of thirtynine full paid men who are carefully drilled and competent to meet any ordinary emerg ency that may arise. To show their efficiency a company stationed at the race track at Clin ton on July 30th, 1908, made a hitch from bunks and horses in stalls, ran one-half mile, laid 150 ft. of hose, broke hose, and connected pipe in one minute and fifteen seconds. The men that made this record were I’hil Me Dougall. driver; Joe Mallory, coupler; Art Jordan, pipeman, John Christie and Captain M K. Hartman in charge. The illustration made from a photograph shows the wagon leaving the shed at the track. This certainly places the men at the head of the list in fast time making and the horses among the best in the service. The horses are called Faddy and Prince and, as will be seen by the illustration, are a very fit-looking pair. They have a record of champions of Iowa in 1907, with 1:18 3-5 minutes for a mile and they won the same honor in 1908, with a record of 1:16 2-5: while in 1908, they also captured the world’s championship in 1.15. There are seven fire stationin the department occupied by nine companies, the principal one, or headquarters, being shown herewith. The valuation of these build ings is $650,000, and their equipment. $300,000. The fire loss for the three years past arc: 1906, $64,323.55; 1907, $198,960.64. and for 1908. $114,464.12. These figures are low considering the size of the city and the property value to be protected. Chief George M. Kellogg, whose portrait is given herewith, has been head of the department for some years, having graduated from the lowest rung of the ladder up. He is very progressive and well informed in his profession, and was elected president of the International Association of Fire Engineers in 1906. 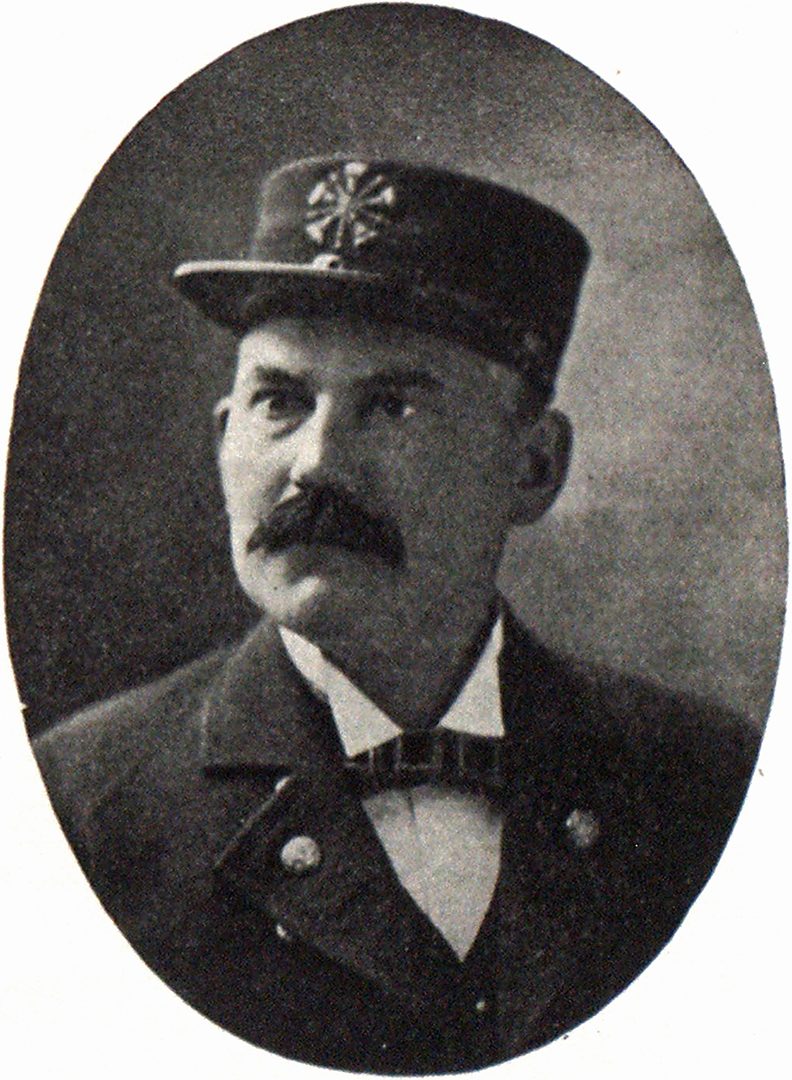 In his annual report on the fire department of Sioux City, Ia., Chief George M. Kellogg writes as follows on the subject of incendiarism: “This is a subject that I have never mentioned in my reports before, although for years this is one of the things that has caused this department to show a much larger loss than it should legitimately show. For this year, ending March at. 1909, I have kept track of the fires that wo were reasonably certain were of incendiary origin, and 1 find that there were eleven fires, at which the loss was $33,345.52, and that this same amount was collected from the insurance companies. In addition to the above-mentioned fires, 1 am satis tied that there were several others of the same character where the ear-marks of incendiarism were not so plain; but of the eleven above mentioned I feel thoroughly satisfied as to the cause, although not possessing evidence to convict. It would seem to me that the companies interested could with profit make the work of the incendiary more hazardous. Our legitimate loss is enough, and I do not relish the idea of being compelled to show an additional loss of from 30 to 35 per cent, that is not legitimate.” Of the 245 alarms answered by the department during the twelve months covered by the report, 54 were for fires of “unknown” origin; and 24 were still. In answering these alarms the fire department traveled 1,084 miles and 4 blocks, worked 198 hours and 50 minutes, laid 50,950 ft. of hose and stacked 1,550 ft. of ladder. Of the above fires, 134 were in wooden buildings; 32, in brick and stone buildings; 2, in corrugated iron buildings; 49, in outbuildings, rubbish piles, burning grass, etc.; and 28, false. The losses for the year ending March l, 190§, were $114,464.12, of which amount $45,321 were lost in one fire—that of the National Bakers Egg company and the Hanford Produce company. At this fire the “watchman lost his life and every inch of the building was burning before the alarm was turned in, so that the department had no possible chance of saving it, although several hundred thousand dollars’ worth of adjoining property was saved. Subtracting that loss from the above aggregate, the remainder—$69.143.12—leaves the small average of $283.37 per fire. The loss on stock and fixtures amounted to $81,988.03; on buildings, to $32,476.09. The insurance recovered on stock and fixtures was $80,079.63; on buildings, $31,271.09—total, $111, 350.72: net loss over insurance collected, $3,113.40. The Sioux City fire department is full paid and was organised twenty-one years ago. Its total manual force consists of the following: Chief: assistant chief; captains, 8; drivers, 11; engineer; stoker; hosemen and laddermen, 14; electrician ; assistant electrician. The equipment is as follows: Hose wagons, 4; combination hose and chemical wagon; chemical wagons, 3; city truck; 75-ft. aerial truck; first-size Xott steamer; chief’s buggy; electrician’s buggy; electrician’s repair wagon; exercise wagons, 5. In reserve are the following: Silsby engines (one 3-size, condemned 1,2; 2-horse hose wagon; hose wagon fully equiped and ready for service at any moment; city truck (old). Of hose, there are 13,750 ft—cotton, 254-in. first-class, 8,300 ft.; secondclass, .1,050 ft.; third-class, 2,400 ft.; horses in service, 24. I he council allowed for running the department during the past fiscal year $32,500 for salaries and $75,000 for expenses. Chief Kellogg recommends that the old aerial truck be rebuilt or a new one bought. 1 his recommendation has been made for several years; it should be attended to at once. lie also makes the following additional recommendations; That one or more pieces of apparatus be equiped with turretnozzles; that more lire alarm boxes be added to the city’s system, and, if possible, that the system be extended to Morningside; that three more tape-registers be added; that one more man be added to each company; that another fire engine should be purchased—it is needed in case of a big lire or a conflagration in the business district, and on the North Side, where the water pressure is weakest; that a gasoline or electric pump be purchased to be used in pumping out flooded basements—instead of the fire engine being used for that purpose, which should never be done; that the heavy apparatus at Morningside be supplanted by a lighter rig, as the present combination in service is too heavy for the dirt streets in that district to be successfully operated.

TRUNKING IN THE TELEPHONE INDUSTRY