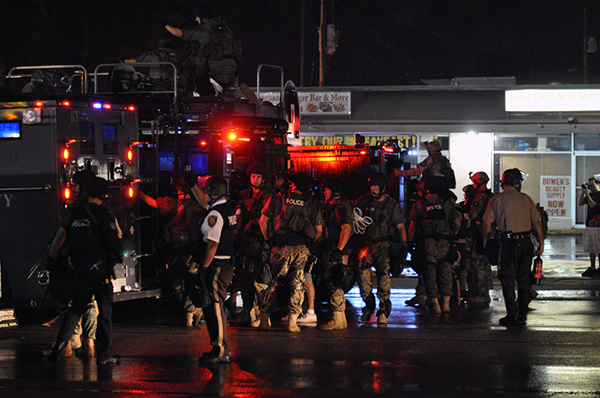 In promoting his book; Situational Awareness for Emergency Response, Dr. Richard Gasaway, states, “Situational awareness is more complex than simply noticing what is happening around you. An emergency responder must capture clues and cues in the emergency environment, make sense of the information, and predict what will happen next.”

Following the grand jury’s decision not to indict Ferguson (MO) Police Department officer Darren Wilson in the shooting death of Michael Brown, the city erupted in violence and flames. After Ferguson, the focus turned nationally to other events. Most notable was the death of Eric Garner, a 43-year-old black man who was placed in a choke hold by police during his arrest by New York City police officers and who ultimately died. This caused national and international protests that were reminders that racism continues to be a dividing force in America.

An August 2014 online article from HarlemWorldMag brought us back to July 16, 1964. That night, James Powell, a 15-year-old black student, was shot and killed by white Lieutenant Thomas Gilligan in Manhattan. Like Ferguson, this resulted in six nights of rioting in the Harlem and Bedford-Stuyvesant sections of New York City. This became the catalyst for other riots across the country. George Bernard said, “If history repeats itself, and the unexpected always happens, how incapable must Man be of learning from experience.”

Riots also broke out in sections of Los Angeles following the 1992 acquittal of Los Angeles (CA) Police Department officers in the beating of Rodney King. In a 2000 Kennedy School of Government Case Program, The Flawed Emergency Response to the 1992 Los Angeles Riots, Susan Rosegrant wrote that although firefighter Scott Miller was shot driving to a conflagration, there were more than 12 documented attempts to kill firefighters and paramedics in just the first three hours of the riots.

With focus on law enforcement, the fire service—as a partner in public safety—should prepare for residual fallout as a result of Ferguson. Protests have awoken images of riots of the 1960s, when hoses were used to break up protests. Following an incident in Birmingham, Alabama, the New York Fire Officers declared in a resolution; “This shameful and deplorable conduct by the City of Birmingham . . . has brought discredit to the honorable status of professional firefighters.”

Following Ferguson, Duval County (FL) GOP Secretary Kim A. Crenier posted advice on Twitter that Ferguson police should use hoses against protesters. Although hoses and water cannons have been used internationally by police to quell protests, most people equate their use with firefighters and fire departments, and fire departments are generally suspected of working with local law enforcement.

Reacting to peaceful protests that included blocking major highways, the New Brunswick (NJ) Police Chaplains Group included in a statement; “By disrupting traffic along these busy highways, ambulances, fire trucks, and other emergency response vehicles are slowed down or prevented from responding to an emergency.” Protesters blocking I-93 in Boston, Massachusetts, and subsequent traffic prevented an ambulance transporting a cardiac patient to its initial hospital destination. According to WKYC in Cleveland, Ohio, as protesters blocked the public square, a fire truck was briefly blocked in its emergency response. In San Mateo, California, protesters blocked both directions of the San Mateo-Haywood Bridge. This tactic of blocking traffic caused motor vehicle crashes and prevented emergency vehicles to respond to incidents. Though blocking emergency traffic may be uncommon, responding in the wake of protests or riots is not. Although fire departments make every effort to remain neutral, the relationships built with law enforcement and the danger involved in responding during these incidents make it challenging.

One complaint about the Ferguson (MO) Police Department (FPD) and other cities since is that the department’s makeup did not reflect the diversity of the community. Diversity in the fire department is not new, but public safety agencies will be under scrutiny. In a 2006 diversity initiative by the International Association of Fire Fighters, Achieving and Retaining a Diverse Fire Service Workforce, attempted to identify effective recruitment, selection, and retention practices to achieve a fire service workforce that reflects the community served. The report includes obstacles to overcome and success stories. Included are The Top 8 Effective Measures used by Most Successful Fire Departments. They follow:

Following an investigation by the Justice Department, the FPD the report stated that “Ferguson’s approach to law enforcement both reflects and reinforces racial bias, including stereotyping.” The investigation uncovered racially biased e-mails and jokes, some of which referenced President Obama and the First Lady.

Now is the time to learn from Ferguson. The fire service is not immune to the after-effects of Ferguson. It’s time to now to not just draft policy, but to enforce it. E-mails sent with racial, sexual, religious, or other biases by a few will reflect on the department as a whole. Actions taken as a result of enforcement are as important as the policy itself. Fire service leaders need to read reports coming in as a result of Ferguson or similar investigations and examine operations. A complaint with these biases in delayed emergency responses or patient care and possible civil action, which will take your department years to regain public trust. As TV host Stephen Colbert said, “Facts matter not at all. Perception is everything. It’s certainty.”

Apprehension, a result of Ferguson and other protests nationwide, is the militarization of police departments. In an interview, when Senator Claire McCaskill (D-MO) was asked about police actions in Ferguson, the Senator said she thought officers went too far with a militarization response that was more of a problem then a solution. “I think it escalated the situation, it didn’t deescalate the situation,” McCaskill said. She said her goal has been to get the police force to stop using “military responses” and “see if we can’t get back to good, solid police work that keeps the protesters safe.”

In an interview with national news after addressing 200 top law enforcement officers from across the country gathered in Chicago by the Police Executive Research Forum, Colonel Jon Belmar said, “I think we have to look at this from another vantage point.” Belmar said the heavy-armored trucks and some of the military-style equipment used by police during unrest in Ferguson helped keep civilians and law enforcement officers safe. Actions of officers have been broadly criticized and have spurred a national debate about the militarization of local law enforcement agencies.

With the challenges of safety and protection of first responders a primary concern, it’s difficult to find the proper balance as rules change based on the incident. When a terrorist threat or active shooter incident occurs, the community expects that public safety agencies will respond with every possible resource. Militarization is no longer a consideration. In the event of a mass casualty (MCI)/fatality incident or threat, the resulting question will be why wasn’t the department(s) better prepared? There also continues to be an expectation from the public that first responders must take unnecessary life-saving risks because “that’s what they’re paid for.”

In an interview with news station KSDK, Ferguson (MO) Fire Department Assistant Chief Steve Fair said during the riots the department fought approximately 25 structure fires including a car dealership where 10 cars were lost. With help from the counties of St. Louis and St. Charles, Fair said it was difficult to make offensive attacks because of gunfire. This isn’t the first time firefighters, emergency medical services (EMS) technicians, and paramedics have been shot at in performance of their duties; this includes the four Webster (NY) firefighters who were ambushed and shot on December 24, 2012, killing two and injuring two. This has reopened the question: Should firefighters and emergency medical personnel wear bulletproof vests? Should they be armed?

The United States Fire Administration/Federal Emergency Management Agency report Fire/Emergency Medical Services Department Operations Considerations and Guide for Active Shooter and Mass Casualty Incidents was issued in September 2013 with the goal to maximize survival of responders. The report recommends providing appropriate protective gear to personnel exposed to risks. Considerations, planning, and interagency training should occur around the concept of properly trained, armored medical personnel who are escorted into areas of mitigated risk, which are clear but not secure areas to execute triage and medical stabilization at the point of wounding and to provide for evacuation or sheltering-in-place. With an ongoing ballistic or explosive threat, under the protection of law enforcement officers, teams treat, stabilize, and remove the injured rapidly while wearing ballistic protective equipment,

The Strategic Plan was issued in December 2013, by the Federal Interagency Committee on EMS with input from the March 2010 Stakeholder meeting for recommendations of the National EMS Advisory Council (NEMSAC). To enhance the protection of EMS providers against the daily occupational hazards they face, recommendations included that bulletproof vests be issued to EMS providers. As early as 2008, Chief Dan Jones of the Chapel Hill (NC) Fire Department, recognizing the growing risks to first responders, applied for a Federal Fire Act grant for personal protective equipment (PPE). Other departments have already taken steps to issue vests. The Fairfield (CA) Fire Department is preparing to issue vests. In an interview with the Los Angeles Times, the City of Los Angeles (CA) Fire Deparment Battalion Chief Matt Luckenbach said, “Our role has increased significantly into scenes that are ‘secure.’ When law enforcement goes in … nowadays it’s kind of working right on their heels.”

Following these recommendations, FEMA’s Grants Program Directorate Policy FP 104-010-035-1 was released in April 2014. Its purpose was to define funding from the Homeland Security Grant Program (HSGP) and Tribal Homeland Security Grant Program (THSGP) funding to enable the purchase of ballistic protective equipment (BPE) for fire/rescue and EMS personnel, whose duties may include responses to active shooter incidents, MCIs, and entries into a “warm zone” to support the rapid triage, treatment, and extrication of the wounded. As a result, fire and EMS departments across the county are purchasing BPE.

With fears of similar attacks internationally following the Charlie Hebdo attacks in Paris, in the UK, British firefighters and paramedics have been issued vests. Swedish firefighters are now wearing BPE in Muslim areas or during celebrations of National Day in mosques. Since 2007, paramedics in Winnipeg, Toronto, Calgary, and other parts of Canada have also been wearing vests.

With recommendations from federal agencies, the National EMS Advisory committee, and the responsibility to keep fire and EMS responders safe, BPE appears to be on the of the next advances in PPE. With departments having to do a risk-benefit analysis based on the demographics of their jurisdictions, it may appear to some citizens that the fire department is also becoming militarized. However, with many documented cases of fire and EMS personnel now under attack, it appears that BPE is the next step in the evolution of PPE. With the idea that nothing is more important than the safety of first responders, it’s one the fire service can’t ignore.

Situational awareness is paramount to success. The fire service must use Ferguson as a catalyst to look within our own departments.

D. Brady Rogers retired as a captain/shift commander with the Centerville-Osterville-Marstons Mills Department of Fire-Rescue & Emergency Services after 37 years of service. He has a master’s degree in public administration, he is an accredited chief fire officer with the Center for Public Safety Excellence, and he is an Executive Fire Officer Program graduate. Rogers is also an adjunct instructor for the Massachusetts Maritime and National Fire Academy.