By Daniel Behnam and Robert Lincoln

“Whaddawegot?” is the question that responders ask when arriving at the scene of an emergency. In simple terms, size-up is the ongoing process of gathering and evaluating information from first observations as we respond and when we get there. It has been a basic tool of the fire service for generations. The initial size-up the first-arriving company performs is critical to determine priorities and formulate an incident action plan at a fire or other emergency before additional resources arrive. It is crucial for determining the strategy and tactics for mitigating the emergency. Most important, size-up helps identify factors and conditions that could jeopardize our safety.

Through the years, the scope of the fire service has widened as our mission has expanded. Emergency medical services (EMS), technical rescue, and hazardous material leaks and spills are now part of our routine responses, so size-up has adapted to include more information—especially for incidents with multiple types of emergencies or hazards.

In EMS, we call it patient evaluation; it helps determine the protocols and procedures needed to stabilize a patient. Evaluation and size-up by a hazmat or technical rescue team is much the same process although, because the work often is more complicated, it may take longer.

Size-up, in fact, should begin from the moment a call is received and should be performed by all members, not just officers and the incident commander (IC). The questions are fundamental. In part, they include the following:

Also, preplan information may be available for the specific address. While responding, consider wind speed and direction as well as additional information transmitted by dispatch or displayed on the unit’s mobile computer unit. A critical size-up consideration while responding is what resources are responding and where they are responding from. Why is this critical?

Consider this scenario: It is a common procedure with many fire departments for the first-arriving engine company to begin an initial, quick attack on a fire in residential occupancies with tank water and to rely on the second-due engine to establish a continuous water supply. That’s fine when the second engine is just a few minutes away, but what if the second engine normally on the assignment isn’t available? What if it is responding from a distant district and won’t arrive for 10 minutes? Would this size-up information, considered while responding, influence the officer of the first-due engine to establish their own water supply?

Size-up continues throughout the entire incident; it provides feedback used to measure the effectiveness of tactics and strategy. The actions taken by first-arriving companies may be effective and reasonably safe in the initial stages of an incident. However, they may be judged ineffective by a later-arriving chief officer whose ongoing size-up considers structural stability, civilian life hazard, and risk to firefighters. As a result, the continuous size-up may indicate a change in tactics and strategy. It is not a stand-alone function; rather, it blends into the command decision process and continues until return to quarters.

For example, once a fire is determined to be under control and overhaul operations begin, personnel could be operating at unreasonable risk in a building that has been structurally weakened by fire, has been bombarded with tons of water, and most likely will be demolished. Fire service history is replete with incidents in which firefighters have been killed in a collapse hours after the fire was declared under control. Both early and ongoing observations by all members may be helpful at an after-incident review as well.

Through their experience, past generations have done a great job in developing systems to perform size-up. This includes checklists, flow charts, and even acronyms that assist with recall of pertinent considerations. These systems are still valid and remain integral, and there are many excellent sources for this information.

In today’s world, however, size-up needs to be even more comprehensive. From the start, our eyes and ears need to be on the lookout for much more. We may find ourselves confronted with a deadly contagious disease, an unexpected hazardous material, a civil disturbance, a domestic dispute, a secondary explosive device, an active shooter, and who knows what else. We may need special protective equipment or tools. We may need support from law enforcement or a specialized team. We may even need to stay back or retreat until a scene is made safe. And, we may or may not know this critical information prior to arrival.

We cannot look only at the fire or emergency; we must be “wide awake” and look at the entire scene and the circumstances we are facing. Although this has always been true, today’s world makes it far more essential. We may be responding to an automatic alarm but need to find out if there is a COVID-19 patient on site. We may respond to “a person down” but learn on arrival that a domestic dispute is involved. Do we have a building on fire or a building that has been firebombed and the perpetrators are waiting to attack us? Will we experience early collapse of a burning structure because of the presence of lightweight construction? Is a backdraft imminent?

The goal here is not to create fear but to emphasize that situational awareness by everyone is critical from the outset and throughout the incident. Situational awareness is the perception of what is happening around us and how we might be affected. It starts before an incident occurs. Prior knowledge allows us to prepare for what might confront us. Examples include recognition of a health emergency, reports of potential civil unrest, and a forecast for a severe storm. It’s better to be mentally prepared and to plan rather than to be blindsided.

Communicating vital information to responding units and dispatch is all-important because everyone needs to know. The message should be clear and concise but also complete.

It may be useful to break size-up into two phases.

Figure 1 includes many of today’s size-up considerations, both old and new. We have broken them down by type of emergency with suggested initial and secondary phases. Figure 1 is intended to act as a guide and overview that you can use to build on existing size-up procedures and tools.

Today, many tactical considerations apply to all responses, whereas in the past they would be limited to fires only. In all probability, the list will continue to grow, especially since the fire service now does so much more than just extinguish fires. As a result, size-up needs to be adjusted to fit specific incidents.

Figure 1. A Guide for Developing Useful Methods and Tools for On-Scene Size-Up 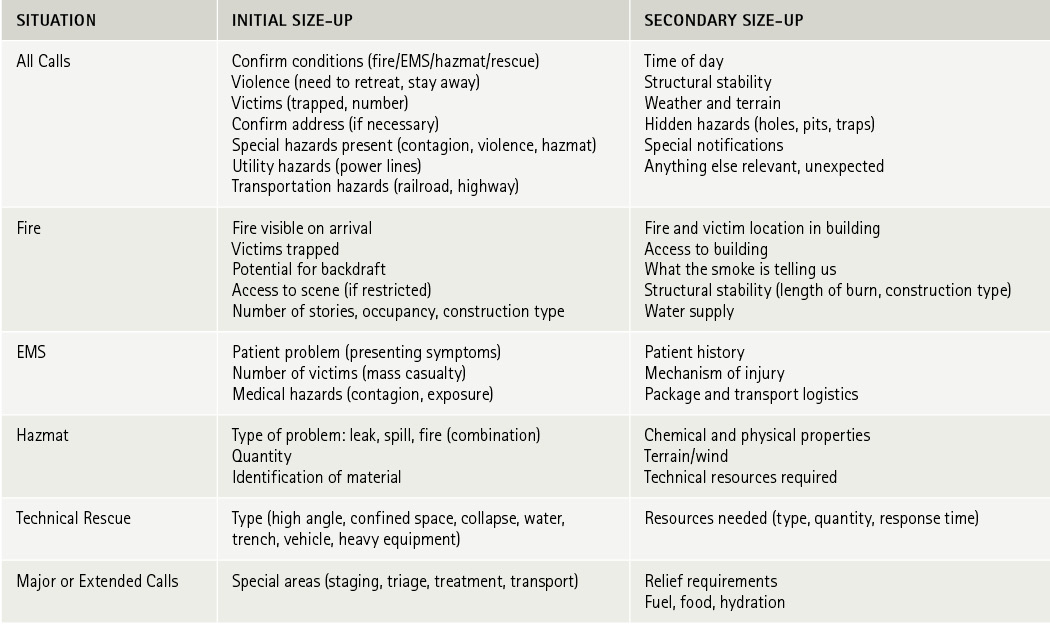 Initial size-up report. The first-arriving unit has to describe to companies still en route what the emergency is, what hazards exist, and if there are victims. Examples are “a working house fire,” “occupants accounted for (or not),” “car into a tree with victim trapped,” “power lines down,” and so on. If the actual location is not the address dispatched, that correction should be included.

Secondary size-up report. After command is established, conduct a secondary size-up (or rundown). Compile relevant information at the command post, verify it to be as accurate as possible, and transmit it according to department or regional procedure. For example, a fire department’s incident command system may require dispatch to advise the IC of elapsed incident time at periodic intervals and to request a progress report. This requires the IC to evaluate and articulate the effectiveness of strategy and tactics and the risk to civilians and firefighters. Not every factor will apply on every call while, at times, others may need to be transmitted immediately.

Feedback from operations enables adjustment of tactics, if required, and provides input for progress reports. Thus, size-up expands from an initial report into a management tool for decision making.

Rescue of victims is always a priority. First-arriving members must be committed to finding victims and moving them to safety. Thus, a complete secondary size-up may have to wait. But remember that vital information, including requests for additional resources, should still be transmitted as soon as possible.

In the business world, size-up would be considered the identification and analysis phases of problem solving using the critical thinking process. Emergency services personnel are problem solvers, but we work with a much shorter time frame. Nevertheless, in our business, we do employ critical thinking skills, with continued size-up providing feedback and playing a major role for success.

Unlike business, we don’t have the luxury of appointing a committee to study the issue, especially during initial attack. But, conferencing by ICs at extended or complicated situations is critical to avoid knee-jerk reactions with potential bad outcomes. Once again, continuous size-up is a primary element in this exercise.

It has been said that the beginning of an emergency scene is semiorganized chaos. To some extent, this is true and reasonable. It is possible to become overwhelmed, especially before sufficient resources are on scene and when we initially operate with incomplete information. But, standard response procedures reduce “shooting from the hip.” Size-up skills help to guide operations to gain control. They need to be prompt, organized, and consistent to quickly establish effective scene management and command.

Many years ago, a commercial airliner crashed into difficult terrain on Long Island with many victims still alive. Arriving first at the scene, the fire chief later explained how overwhelmed he initially felt as he looked at “what he had.” He quickly decided to treat the incident as a giant auto accident; this allowed him to start a successful operation. Given a most difficult scenario, he made an intelligent size-up, communicated the situation to dispatch, and began a coordinated effort that saved every “salvageable” life.

Today’s officers and ICs must be able to direct and control a variety of incident types, sometimes happening simultaneously. They need to understand that there are added factors and new threats to our safety. Constant situational awareness is more crucial than ever. The answer to “Whaddawegot?” may not be so simple these days, so be wide awake, keep a wide-angle view, and expect the unexpected.

Daniel Behnam is a captain with the Vigilant Fire Company in Great Neck, Long Island, where he has been a member since 2012. He is employed by the Port Washington (NY) Fire Department, where his duties include response to medical emergencies and fires.

Robert Lincoln is the retired superintendent and chief instructor at the Nassau County Fire Service Academy in Old Bethpage, Long Island. He is also a 56-year member of the Vigilant Fire Company in Great Neck, where he has served twice as chief of department.