SOME FIRE DEPARTMENT METHODS OF INSPECTIONS

THE following series of replies to a questionnaire sent out on the subject of inspections as practised in fire departments of cities whose population equals or exceeds 25,000 deal with the second part of the questionnaire, the first portion being devoted to the subject of firemen’s schools and drills. The questions as asked were as follows, the replies living numbered to correspond:

6.What is your system of inspection?

7.What authority have you to enforce the orders of your inspectors?

8.How do you cooperate with state fire marshal?

According to our reports for the year ending December 31, 1920, the officers have made 1,600 inspections of buildings, etc.

Inspections are carried on by two captains and ten lieutenants of the department (divided into two platoons alternating weekly), of whom three are sent out daily at 1:30 P. M. and return to quarters at 4:30 P. M., and who make a written report of their inspections to the office. Weekly inspections are made of every garage, dye-works, and alleys or lanes leading to the rear of business blocks, while business houses, hotels, apartment houses, lumber and shingle mill plants are gone over about every six weeks.

Should the inspector issue a warning notice to any person, it is followed up the next day to see whether instructions had been carried out, and should the warning be disregarded, the inspector makes a report of it and an information is laid and the offender brought before the police court for an infraction of the city by-laws or a provincial statute.

1 he inspectors are known as deputy fire marshals and the chief of the fire department is named fire marshal under the Fire Prevention By-law of the City of Victoria, B. C.

Should assistance be required, the fire department would call for the services of the B. C. Fire Investigation and Prevention Branch of the Department of Insurance, who are always willing to co-operate.

6. Inspector takes one man in the forenoon, 2 1/2 hours, to inspect business houses, two times a month.

7. Arrest offenders if they do not comply with the ordinance.

6. Company districts are inspected daily, different men being assigned from time to time; it is our experience that in many cases business houses object to too frequent visits.

7. There is some question as to authority, but we have thus far proceeded nicely.

8. We co-operate with him all right but we believe that all cities should possess full power. Local firemen are always handy to find. In this city the fire marshal has direct supervision of the inspection of all places; that is, firemen make the inspections, their blank forms filled out are forwarded to him, and whenever a serious question arises the fire marshal himself takes charge. It is our policy here to sort of gain the good will of the property owner or storekeeper, rather than threaten him with court proceedings. And as a result thereof, practically every order issued is promptly complied with. In the matter of public playhouses, including motion picture theatres, we assume certain jurisdiction, although the state fire marshal has more authority than this department. We firmly believe that in all cities local fire department should be vested with full authority in the premises, but that isn’t the law in this state. If anything serious should happen it will not be the state body that will be blamed, but the local fire department. Calisthenics are held every morning here, followed by drill practice in the afternoon, one member being present from each 13 companies. Calisthenics, however, take place every morning at each station.

In regard to inspections I assign the deputy chief to make inspections on a different street each day, he makes his report as to the conditions and orders are issued to remedy any hazardous conditions. If the conditions are not remedied a summons is served on the occupant to appear in court, which usually has the desired effect after a fine is paid. 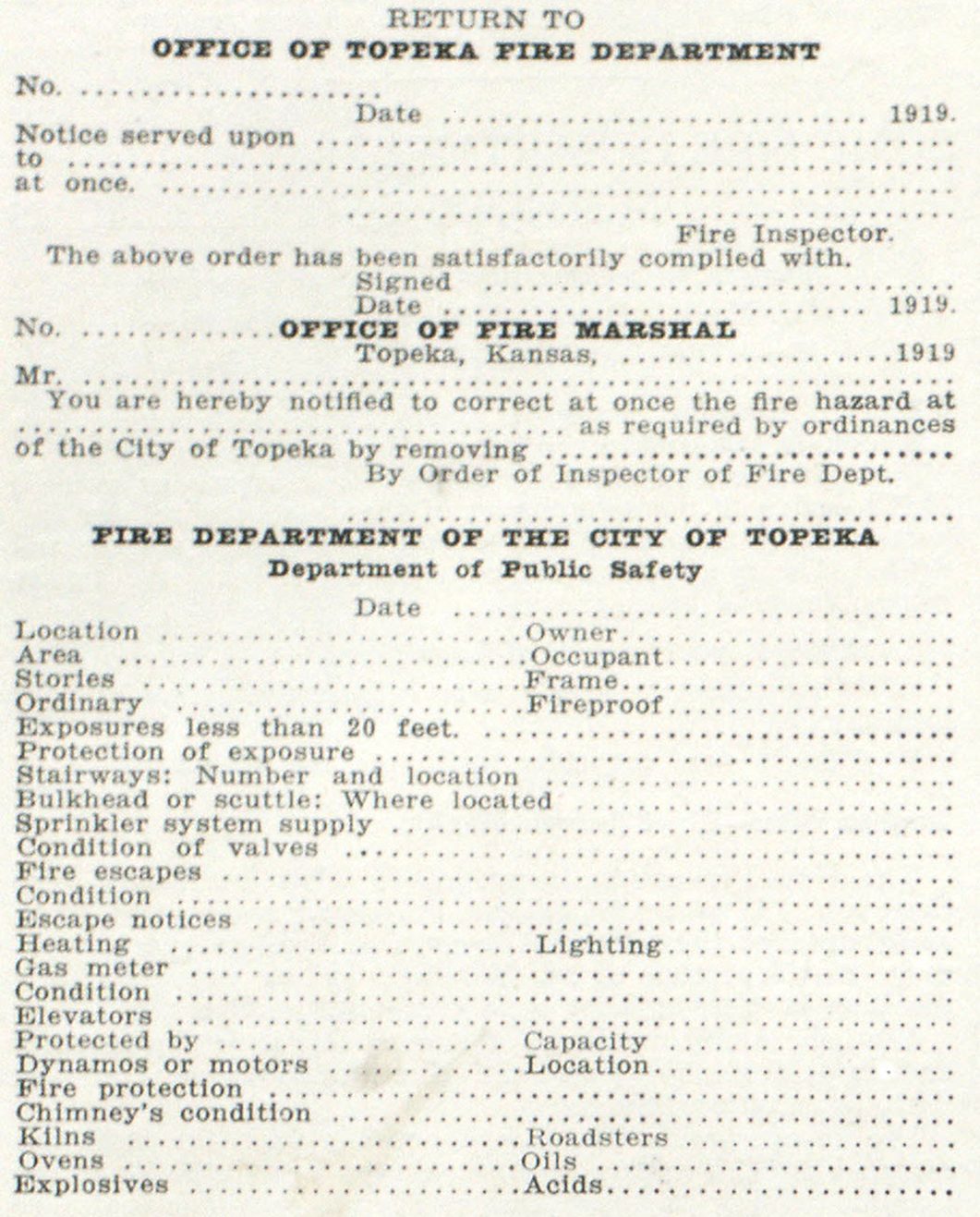 SOME FIRE DEPARTMENT METHODS OF INSPECTIONS

THE following series of replies to a questionnaire sent out on the subject of inspections as practised in fire departments of cities whose population equals or exceeds 25,000 deal with the second part of the questionnaire, the first portion being devoted to the subject of firemen’s schools and drills. The questions as asked were as follows, the replies being numbered to correspond:

6. What is your system of inspection?

7. What authority have you to enforce the orders of your inspectors ?

8. How do you cooperate with state fire marshal?

The Fire Prevention inspection is what I consider very thorough. It is made by the fire wardens, captains, and lieutenants of the different companies, and we endeavor to make an inspection of all buildings in the city, excepting dwelling houses, at least once every thirty days.

We have a city ordinance giving us full authority to enter and inspect all buildings, and if notices are not complied with, prosecution follows.

I am inclosing one of our inspection blanks used by the inspectors in this department.

Replying to your questions, Nos. 6, 7 and 8, relative to inspections in connection with the work of Fire Prevention. The city is divided into districts and monthly inspections of each are made by members of fire companies within those districts. Formerly, this work was done by the firemen on their time off fire duty. Now, under the two platoon law the work is done on the city’s time. It is so regulated that each company member serves as an inspector. We have a city ordinance giving the chief of the fire department authority to order the removal of rubbish and to otherwise enforce Fire Prevention. In cases where verbal notice by an inspector does not produce results formal written notice is given. Flagrant cases are reported to the state fire marshal who is very active in the matter of co-operation in this work.

6-7. Inspection of business buildings is conducted once each month. At present, the inspections are made by regular members of the fire department on their off-shift. (We operate under the two platoon system.) We have an ordinance relating to fire hazards, and violations of this ordinance come under the jurisdiction of the regular lawenforcing bodies.

We find the present system of inspection, however, is unsatisfactory for the following reasons:

1. It happens rather frequently that the men slight inspection either of certain buildings or of all buildings in their assigned districts.

2. There is considerable difference in the appearance of certain conditions among the men. What looks like a serious fire hazard to one man may be passed up by another as perfectly safe. This is productive of non-uniform results, and causes disharmony.

We recommend that the inspecting be done altogether by (1) either one man designated as city fire marshal, or some such title; or (2) by certain officers who shall receive an increase in pay for the additional duty.

We have a fire marshal who inspects all buildings, basements, lanes and yards, and I also send a member of the department from each district out on this work. I send different men, and this gives each man a chance to familiarize himself with the buildings in his district. The city bylaws enforce the orders of the fire marshal. We co-operate with the provincial fire marshal as much as possible by notifying him of all suspicious fires and rendering assistance in investigating same. We also send him reports of fires and losses.