More
Home Leadership Some Notable “Firsts” in the Fire Service

Some Notable “Firsts” in the Fire Service

A Chronicle of the Important Developments in Equipment and Personnel of Fire Departments Over a Period of Twenty Centuries, Concluded from Last Issue

TWO platoons of firemen for full paid Fire Departments originated with Chief James W. Dickinson, of Cleveland, who read a paper favoring that system at a convention of the International Association of Fire Engineers at Minneapolis, August 14, 1888. Cleveland was not the first to adopt that system, but it was the first to grant its firemen one day off duty in every four.

New York was the first to give the two platoon system a trial in one Battalion, from December 5, 1904, to March 5, 1905. It was discontinued on petition of 85 per cent of the firemen of that battalion. The whole department was then given one day off in five. The two platoon system was tried in two Chicago Companies, Engine 40 and Truck 5, both in the same station, for 50 days commencing Oct. 22, 1905. It was given another trial in a whole battalion from August 2, 1906. to April 15, 1907.

The next association to be organized was the Northwestern Ohio Firemens’ Association in 1874, Michigan and Texas in 1875, and New Jersey and Pennsylvania in 1879.

The first veteran firemen’s association was organized at Boston, December 30, 1833. Its purpose was to man hand engines temporarilly without companies. It existed for many years. The next was the New York Association of Exempt Firemen, organized October 13, 1842, followed by the Philadelphia Volunteer Firemen’s Association, December 14, 1875, the Boston Association, April 9, 1879, Providence, R. I., January 11, 1881, and a great many throughout the country since then.

The uniforms of volunteer and hand engine firemen were practically all red flannel shirts, with white belts for officers and black for privates; dark pants and a glazed leather cap. The blue uniform of the present time came with full paid firemen in 1865.

Commanding officers of old time fire companies used short brass trumpets to give orders. Each piece of apparatus carried two of them. Presentation and parade trumpets of elaborate design, large and costly, came in hand engine times and are now often carried in parades of active and veteran firemen.

There have been many newspapers devoted wholly or in part to firemen. The first was the “Firemen’s Intelligencer,” in New York in 1826. The next was the Firemen’s Advocate, at Boston, in 1850. During the hand engine and volunteer firemen period there were several published in New

T urk. Philadelphia. Detroit and San Francisco. After the civil war, for some years, the principal newspaper for firemen was the “New York Mercury.” a weekly publication devoted to theatrical and sporting news. The first of several firemen’s publications in recent years was the Firemen’s Journal of New York City, established in the year 1877. now FIRE ENGINEERING.

There are many collections of fire service relics. Nearly all of the many veteran firemen’s associations have one or more. There are many private collections. There is but one large collection of old fire apparatus, that of Henry Ford, at Dearborn, Mich. 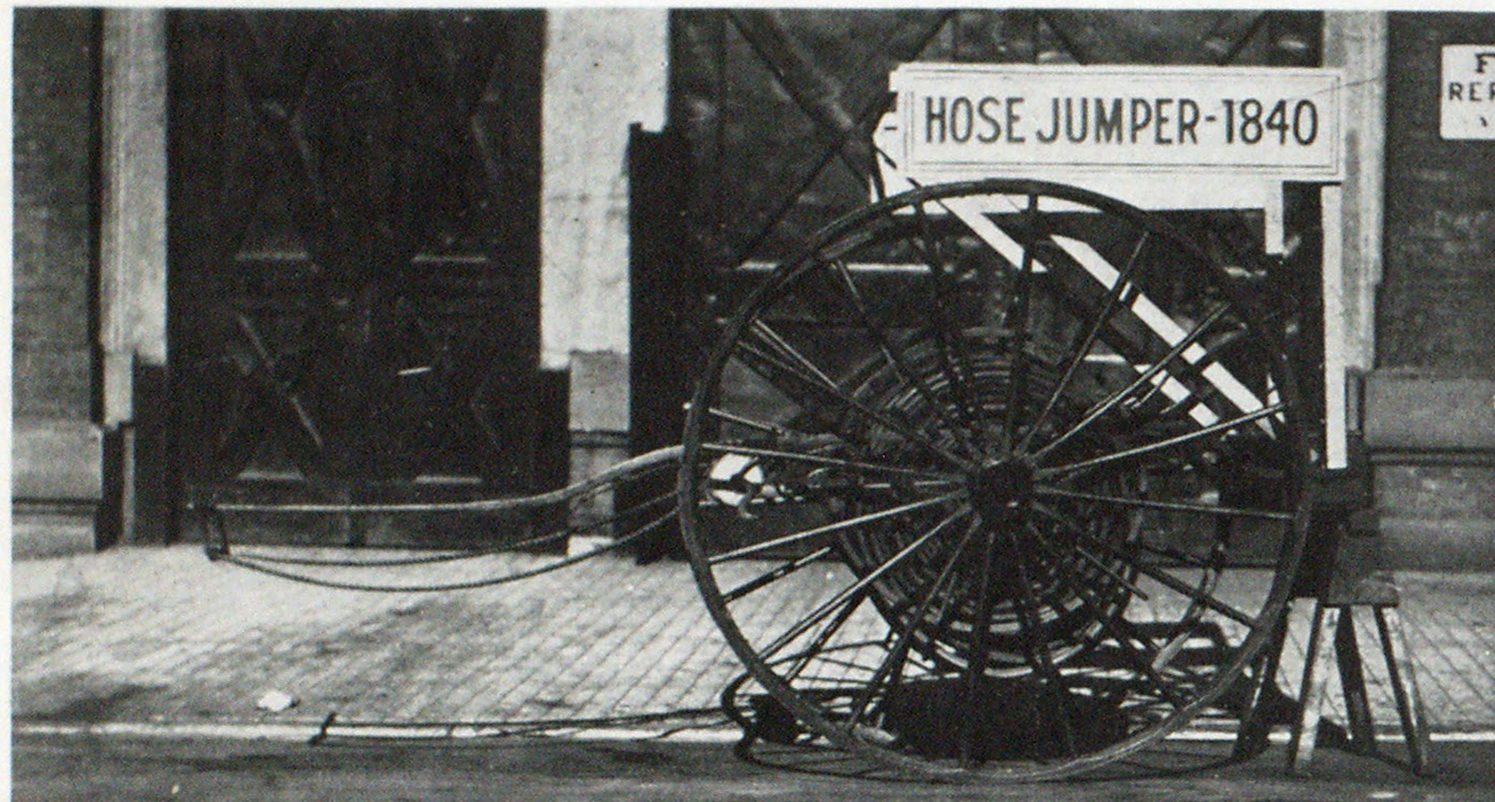 Some Notable “Firsts” in the Fire Service

A Chronicle of the Important Developments in Equipment and Personnel of Fire Departments Over a Period of Twenty Centuries, Continued from Last Issue

ST. LOUIS was the first to have a pompier corps, in 1877. It was organized by Phelin O’Toole and used the scaling ladder invented by Chris Hoel, which has since been used in many Fire Departments and Drill Schools and carried on many pieces of apparatus. Capt. O’Toole was killed by the explosion of a portable fire extinguisher, July 6, 1886.

New York was the first to have a search light for service at fires, installed January 1, 1899.

St. Joseph, Mo., had the first swinging harness in 1871, which was for one horse only; Alleghaney City, now a part of Pittsburgh, Pa., had the first double swinging harness the same year. Neither of them had a swinging collar. The first with a swinging collar was in Louisville, Ky., in 1872. The first patent for a swinging harness was issued to Edward O’Sullivan, then of San Francisco, later of New York, December 14, 1875. In June, 1877, Mr. O’Sullivan sold an interest in his patents to Joseph Speddy, a battalion chief of Cleveland, who with Isaac Kidd, also of Cleveland, was the first to manufacture them in the East. Several others made them later.

Sliding poles, now in almost every fire station were the most rapidly and universally adopted devices, after their success was known, in the history of the fire service. Necessity was the mother of their invention. In 1878, Engine No. 1 of Chicago had a colored company with a white Captain, David B. Kenyon, who invented the sliding pole in that year.

Just prior to that time there was an epidemic of quick hitching in fire departments throughout the country. Some stations had sliding shoots alongside of stairs from sleeping to apparatus floors. Capt. Kenyon devised a pole to replace the shoot. A mechanic of much ability, he rounded a piece of timber to three inches in diameter and rubbed it down to a smooth surface with sand paper and oil. It was installed on April 21, 1878. George Reed, a colored fireman, was the first to use it. It was a success, and another was placed in the same station May 24, 1878. It was quickly adopted for other Chicago stations and in other cities. Not realizing how extensively sliding poles were to be used, Capt. Kenyon did not have it patented. He died from injuries received by being thrown from his buggy enroute to a fire when acting as a battalion chief, October 24, 1884.

The first metal sliding pole made of brass was devised by Captain Charles Allen, of Engine 1, Worcester, Mass., and first used in department headquarters, where that engine was located, June 14, 1880. The Boston Protective Department had the second brass pole. May 25, 1881. Brass poles at once superseded wood poles.

The first electric fire alarm telegraph system was installed in Boston, and the first alarm by the system was turned in at 8:25 p.m., Thursday, April 29, 1852, from station 7, for a small house fire.

Dr. Channing, in 1855, delivered a lecture on fire alarm telegraphy at the Smithsonian Institute, Washington, D. C. One of those who heard it was John N. Gamewell, telegraph operator and postmaster at Camden, S. C., who became interested and purchased Dr. Channing’s rights to construct the system in cities other than Boston. The system has ever since then been known as the Gamewell system.

When the Civil War commenced, Mr. Gamewell went to his home in Camden, S. C. where his fire alarm patent and rights were confiscated by the U. S. Government and sold at public auction in Washington, in May, 1853. John F. Kennard, of Boston, afterwards superintendent of the fire alarm system of that city, went to Washington with $20,000 to purchase the Gamewell interests, expecting to have to pay about that amount therefor. He purchased it for the surprisingly small sum of eighty dollars.

After the war, the then owners of the system returned to Mr. Gamewell a large portion of his patents, took him into the concern and made him its President, which position he held until his death many years later.

The latter system was destroyed when that city was bombarded by U. S. troops the same year. Portland. Me., had the first automatic alarm system. March 19, 1867.

New York, in 1851, established a More key system for telegraphing alarms between police stations and alarm bell towers. In January, 1871, six years after it established a full paid force of firemen, it constructed a fire alarm system under Gamewell patents.

The first school to drill firemen in their duties was established in New York in February, 1883. They now exist in many cities. New York also had the first fire college to instruct firemen in all branches of the service, established January 1, 1911. Firemen of many other cities have been instructed in both these schools.

Boston was the first to abandon the volunteer firemen system, in 1837, when it paid its firemen a few dollars annually for service at fires as call firemen. That city had the first full paid Chief of Department who devoted his entire time to the Fire Department. William Bamieoat, who was paid a salary of $1,000 per annum from 1837 until his retirement because of old age in 1854.

Cincinnati had the first full paid firemen, January 1, 1853, when the engineer and driver of the first steam fire engine went into service. They devoted their entire time to the work of the department. The other members of companies were part paid call firemen. This system was adopted in many cities when steam succeeded hand engines.