In 1865 the fire department of Somerville, Mass.,responded to 188 alarms, 57 more than in 1894; but 53 were still alarms, where the services of only a small portion were required. The total loss was $42,316, about $225 an alarm. The valuation of the property at risk was $361,355, and the insurance involved amounted to $180,509. The men under Chief Hopkins and Assistant Chief Barker number, when the companies are full, 21 permanent, and 80 call. The department has in active service 2 steamers, 2 tracks, 5 hose wagons, 1 combination hose and chemical, with two 30-gallon tanks, and 1 chemical, and 2 50 gallon tanks. This piece of apparatus has made a good record. There are in reserve 1 steamer, 1 hose carriage, and 1 ladder truck, all in serviceable condition. In accordance with the law requiring the chief engineer to make an investigation within two days into every fire occurring within the limits, by which damage is done to property, and to report to the State fire marshal, Chief i Hopkins,who has faithfully observed the law,has shown that; many of the fires had a criminal origin, and there have been fifteen convictions of incendiarism during the year. There were 28 incendiary fires. Chief Hopkins adds: “As the crime of incendiarism is one of the most difficult in the whole catalogue of offences to bring to conviction, the record shows the value of the law, and is evidence that the fire marshal and his’aides have been zealous and alert in the performance of their duty and deserve the encouragement and support of all our citizens.” Of the 1,900 acres included in the city of Somerville, there are 400 acres of marsh land. On the 1,500 acres remaining there is a population of about 53,000 people, who occupy 9,476 buildings, which, with the manufacturing and business establishments, have a valuation of almost $25,000,000. This is exclusive of 30 churches and other untaxed real estate of various kinds. Nearly all these dwellings are constructed of wood with shingled roofs. The construction of so many buildings with highly combustible roofs, supplies the conditions for an extensive conflagration if wind and weather are right. In conflagrations the exterior of buildings near or remote are liable to be fired from the big fire, and the roof is the combustible point. In the Roxbury blaze of May, 1894, 30 working fires were set, some a mile away. Somerville’s possibilities in this respect emphasize the need of a very efficient ladder service. This Chief Hopkins emphatically recommends. During 1895 there were laid down 94,400 feet of hose; 6,762 feet of ladders were raised; and 1,432 miles run. Chief Hopkins and his men keep up the high reputation which the Somerville fire department has so long possessed for promptitude, efficiency, and thorough organization. 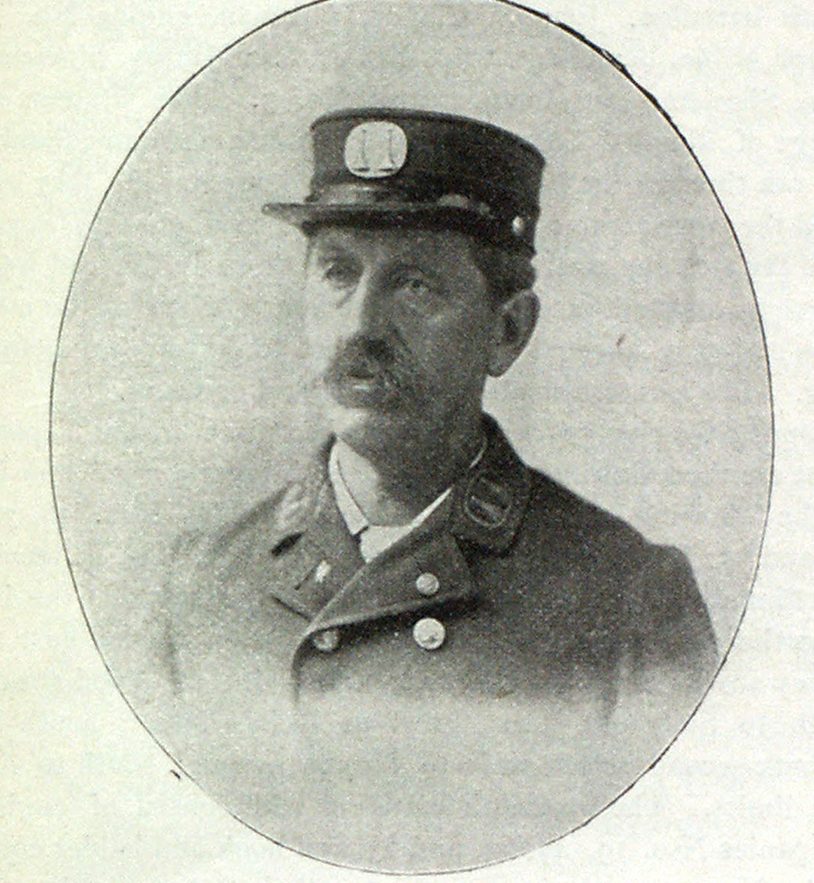 THE high state of efficiency which the the fire department of Somerville has reached is in keeping with its materiel. Of course the department could utilize more than it has; but what it has is good and is made the most of. The headquarters building is a model of convenience. Its internal arrangements, sa far as they concern the chief’s apartments, the fire alarm room, and the battery room have been already described and fitly illustrated. In this number are presented views of the housed apparatus and the exterior of the building; which, as will be seen, combines the useful as well as the ornamental—the latter feature being more conspicuous in the hose house No. 5 (of which Irving C. Jackson is captain) illustrated in the last FIRE ANIJ ATER.

The new apparatus house which is being built lor the use of the department occupies the site of the old convent of I’rsttline nuns which was despoiled and burned by a mob on Mondayevening August n, 1834, before the city was separated from Charlestown. It was tlte first large fire of which there is any record.

The buildings destroyed were built of brick; the main building, erected in 1820, was So feet long, four stories high, with cupola, and two large wings, two stories high, erected in 1829, aiso a farm house, and bishop’s cottage, and other buildings. They were all splendidly furnished and perfectly appointed throughout The grounds were beautifully laid out and the location magnificent. The buildings were erected for tlte education of girls and occupied in 1827 by the Order of St. Ursula, organized in 1536, to administer relief to the sick and afflicted and to educate the young. The teachers were nuns educated in French convents, the pupils, daughters of wealthy Protestants from all sections of the country, mostly of the best Massachusetts families. At the time of the fire there were fifty-seven pupils, most of them very young, twelve nuns, and three attendants, all under the direct charge of a lady superior. Of these nuns many false statements were put into circulation, which inflamed the ignorant and bigoted portion of the community. The official statement of the selectmen was in the printer’s hands and was to be made public on the next day. The mob, however, would not wait and by 8 o’clock on the Monday evening the rioters began their work by throwing stones and other missiles at the windows of the building. A large bonfire was made of tar barrels, which they brought with them, evidently to warn those in league with the conspirators to assemble. The bonfire also attracted many to the spot who had no hand in it whatever. A party of fifty or more persons disguised in fantastic dresses and with painted faces, after warning the inmates who had retired for the night to make their escape, proceeded to assault the house. The ladies of the institution, with the children, retired from the rear of the building into the garden and thence to a neighbor’s farm house. The mob then sacked the building, destroyed much property, including many musical instruments, and confiscated all the money, of which there was a considerable amount, and other valuables which they could conveniently carry away with them. They heaped all c imbustible materials in the centre of the floors and applied the torch in many of the rooms, so that the building was very quickly wholly enveloped in flames. The fire was started at 12.30 o’clock, and was seen for many miles distant, l ire companies in large numbers came from all the surrounding towns, but were prevented from working by the mob, although they would have been unable to save the building,owing to the scarcity of water. The fire companies were not in league with the secret conspiracy which did the work, neither did they know the fire was to occur, except from general rumor. The investigation after the lire proved this without a doubt. Theie were several buildings in all burned, with a total loss of about $60,000. The mayor of Boston called a public meeting in Kaneuil Hall the next day, at which resolutions condemnatory of the outrage were drawn up and published. The new station will be an ornament to the neighborhood.

SOMERVILLE FIREMEN’S RELIEF ASSOCIATION organized on May 9, 1870, with Chief D. A. Sanborn as president, T. D. Dennett, as vice-president, Robert A. Vina! as secretary and treasurer; the trustees being Chief Sanborn, Robert A. Yinal, S. H. Stevens, of hose J, Joseph II. Hollis, of hose 2, and Melvin B. Ricker, of engine 1. The association was incorporated by a special act of the State legislature on March 19, 1890. In 1863 Chief James R. Hopkins became president and has combined in office ever since.

PRINCIPAL FIRES OF THE WEEK.