Chief Samuel F. Hunter, the efficient and progressive chief of the fire department of Springfield, Ohio, recently presented to the city manager his annual report for the year ending January 1, 1917. In it he recommends the purchase of five fire alarm boxes and the necessary wire and insulators for their installation and says: As per my year’s report for 1914, that suggested the installation of a private branch switchboard at Central Fire State, headquarters, connecting all the present telephones at the various fire stations into same, and the employment of at least two (2) young men as telephone operators, one for day and one for night duty, twelve hours each. By so doing it leaves a man at Central Fire Station at all hours for the receiving of fire alarms by telephone and otherwise; this is urgently needed. Other recommendations are for the installation of fire hydrants in front of each public school building in the city, and for the passage of a building code ordinance. The total value of property on fire was $2,711,871, being buildings, $1,536,041 and contents, $1,175,830. The losses on buildings amounted to only $61,108 and on contents to $123,458, making a total of $184,566. The total manual force of the department at the close of the year, consisted of fifty-two men, as follows: 1 chief of the department, 1 superintendent of fire alarm, 9 marshals or captains, 4 engineers, 37 firemen. All of the men arc on duty twenty-four hours every day, except one day in seven they are off duty according to State Law; their days off rotate so there are forty-four men on duty every day, with the exception when they go to their meals. During which time there is only twenty-five men on duty at the nine fire stations, when the men are at home to meals they are not off duty from responding to fires.

There were nine fire stations furnished and in service at the close of the year. There is in service in this department at the present time the following apparatus and equipment: Hose—Under three (3) years old, 7,500 feet; over five (5) years old, 4,500 feet; total 1:.’,000 feet. Motor apparatus in service—1 Peerless seven-passenger car for chief; 1 runabout for superintendent of fire alarm; 2 combined pumping engines and hose carriers; 7 combined chemical and hose carriers; 1 Seagrave seventy-five (75) foot aerial ladder truck. All fully equipped with hand chemicals, ladders, lanterns, axes, nozzles, fire coats and helmets, and the necessary fire tools. 1 Kelly service ladder truck, to be installed at No. 2 Fire Station in February. 2 steam fire engines in service with draft irons to hitch on motor hose apparatus, when needed, one at No. 4 Fire Station and one at No. 6 Fire Station fully equipped. Five (5) head of horses can be sold after February. Apparatus and equipment out of service w hich can be sold: 1 combined chemical and

The fire alarm system, says the report, has been giving the best of service during the past year. There is in service at this time: 1 Gamewell tencircuit non-interfering repeater, 1 ten-circuit automatic switchboard, 1 non-interfering transmitter with necessary brake wheels, 228 cells of storage battery, 50 non-interfering fire alarm boxes, 74 plain old style fire alarm boxes, making a total of 124 alarm boxes connected with the system ; 1 tower bell striker, 15 alarm gongs, 1 punch register. There is 25,215 feet of underground cable in the mercantile district of the city connected up into fire alarm iron pedestals; 150 feet of aerial cable, 12 cable boxes equipped with choke coils and lightning arresters, 75 miles, No. 14, gauge copper aerial wire for fire alarm circuits, with cross arms and insulators, etc. 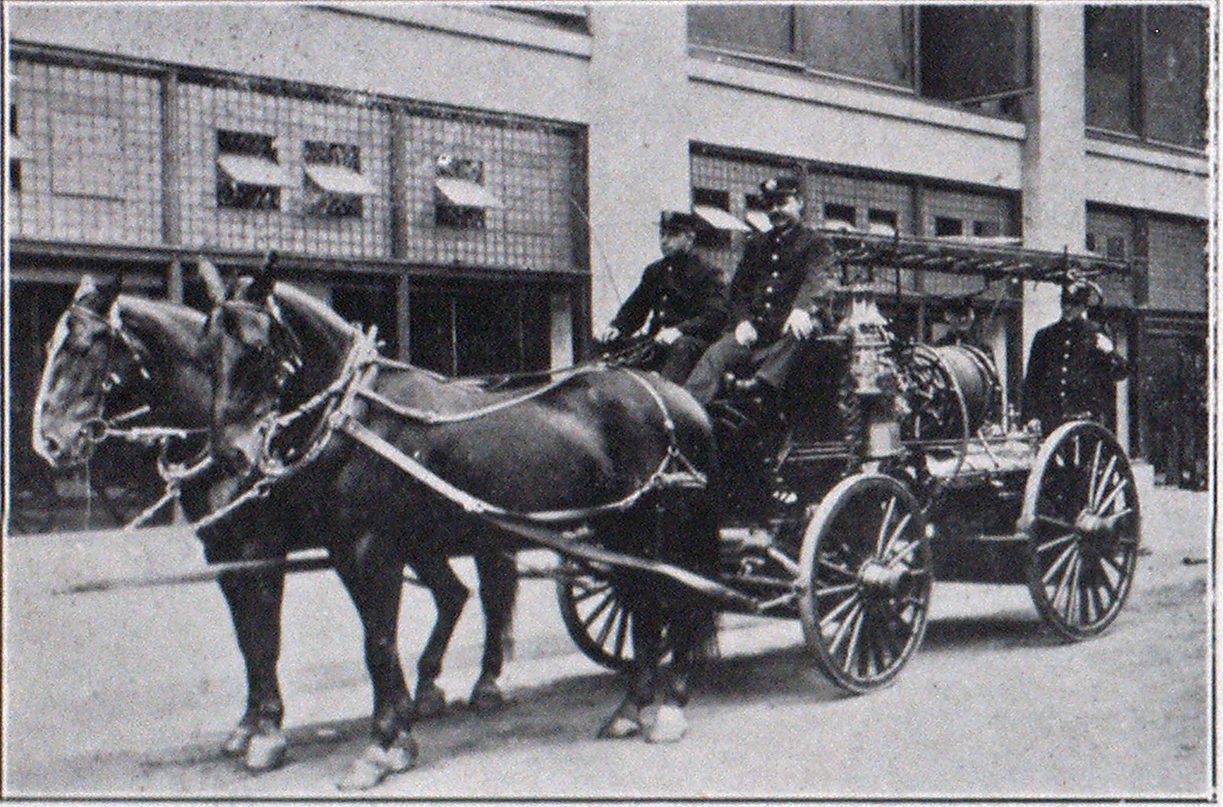 A large number of the fire departments of Massachusetts are better equiped, according to population, than those of any other State in the Union. The discipline of the men, too, seems to be of a higher grade than will be found in many other places. These facts will be apparent to anyone visiting the larger departments in the State and by attending one of the annual con editions of the firemen’s association. In the important matter of equipment alone, a majority of the cities and towns in Massachusetts will be found better provided with apparatus and fire appliances than places in other States of the same size and environment. Take Springfield. for instance. Here is a hustling city of about 75.000 population, and a fire department larger than New Haven, Conn.—-a city much larger in every respect. From the accompanying illustrations it will lie seen that Springfield is also equiped with the most modern firefighting tools. The aerial truck, automobiles for auxiliary work, modern combination wagons, steamers and appliances, are amply represented in this department. The management of the service is in the hands of the hoard of fire commissioners, which consists of four members and an aiderman, who is chairman of the fire department committee of the citv government. This year James E. Dunleavy is chairman of the board, and Henry L. Hines, secretary. The territory covered by the department is large, extending as far as Indian Orchard, about eight miles from the city hall. For this reason there is a good number of steamers, and contracts were recently awarded for two additional Amoskeag engines of the second size. The apparatus is reported as being all in good condition, and it certainly looks so. The greatest novelties in the equipment were two automobiles for auxiliary service and use of the deputy chief. With reference to these machines, the commissioners say that, after a thorough investigation, it was decided to order a four cylinder automobile from the Knox Automobile company, of Springfield, capable of carrying eight men. The machine proved so successful that another was ordered and is now in commission. The equipment of the department, besides the automobiles, is as follows:

6 steamers, and r in reserve.

I chief’s wagon in reserve,

I supply wagon and sleigh for each station,

I wagon for fire alarm service.

The reduction of the call force is proceeding gradually, and it is expected that all of the men will be full paid in a short time. No less than fifteen permanent m n were added to the list last year. The civil service commission has decided to examine annlicants for appointment more along the lin of physical fitness than mental condition There are now IOO men thus selected on the eligible list. The cost of the department last year was $128,411.91—or $51.60 less than the amount appropriated. The total value of the buildings and equipment is $377,210. In addition to the fire hydrants, there is an auxiliary water supply, which may be drawn from e-ghteen firereservoirs. Illustrations of the apparatus in commission in the department accompany this notice.