By Dane Carley and Craig Nelson

Our last discussion, as illustrated below, centered on HRO principle #2: a reluctance to simplify. We discussed fireifghters’ need for routine in their tasks (e.g., pulling a preconnect), but routine in decision making leads to complacency. Therefore, seeking out differing points of view is important when there is a reluctance to simplify. With the nuggets of knowledge we learned from principle #2, we move on this month to HRO principle #3: a sensitivity to operations. If you’re picturing firefighters sitting in a circle holding hands and singing or engaging in a morning hug at changeover, you can stop worrying. For those of you who subconsciously stopped breathing during that last part, you’ll be happy to know that we are referring to operational sensitivity, which is much different.

A short example reveals a subtle but important difference between principle #2 and #3. In HRO principle #2, a firefighter starting a positive-pressure ventilation (PPV) fan follows the proper procedure for starting a fan and setting up the most effective operation. In HRO principle #3, that same firefighter also considers how his or her actions will affect others operating on the fireground when that fan is turned into the vent point (e.g., endangering a crew or victim if used inappropriately). 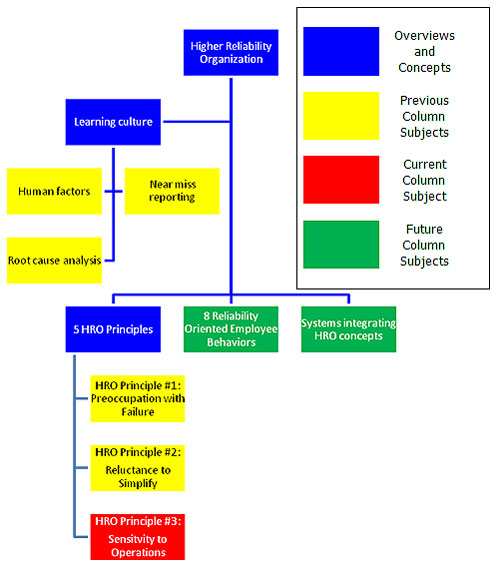 Where We Are: HRO Principle #3 A Sensitivity to Operations

For example, have you ever seen firefighters who don’t always understand what is going on at the top of the department? Often, in this case, there is a lack of information that leads to rumors, misinformation, and false assumptions, all of which affect morale. Meanwhile, the top of the department may not always know what is going on in the street because each of them has a role in the department that causes them to focus on their specific tasks. The administration makes decisions based on the information available to them. As a firefighter in an outlying station may be missing pieces of information about an administrative decision, the administration may also be missing operational awareness because of their separation from the street.

One proven aspect fueling this commonality across the fire service is that we seek out information supporting our point of view while tending to ignore conflicting information. This is called “cognitive dissonance.” Once a person has made a decision about what he thinks is happening, he gathers information to support his decision while ignoring information that conflicts with his point of view. An example of cognitive dissonance provided by Gordon Graham (2011) is the ongoing debate about Fords and Chevrolets. A person who decides to purchase and drive a Ford immediately notices more positives about Fords while noticing the negatives of Chevrolets, even though one is not necessarily better than the other.

Let’s look at a fictitious example of writing specs for a new apparatus. In this case, administrators prefer an apparatus similar to what the department already has because it reduces maintenance and purchasing costs and satisfies certain ISO and strategic considerations. The decision about the “administrative stuff” has already been made, so consideration of alternatives is already limited. Yet, these requirements mean tall hosebeds that are less functional; less interior cab space; and, increased turning radius–the “firefighting stuff.” Do you see the cognitive dissonance coming from both sides? Being sensitive to operations means the administration listens to the operational staff asking for modifications that simplify tasks, make the job safer, or generally improves company effectiveness. Likewise, the operational staff takes the time to understand the strategic considerations. This way, both parties find common ground to achieve all the goals as closely as possible.

The same processes carry over to the emergency scene. Let’s return to the PPV example at the beginning of this column. A decision maker orders a firefighter to turn the PPV fan into the building and begin ventilation. However, the firefighter, being sensitive to operations (awareness, training, understanding), recognizes that doing so endangers a crew searching a room near the vent point. The firefighter then communicates the important details of not being able to vent as ordered. The decision maker (being sensitive to operations), on hearing this, recognizes that the new information is important to successful operations, terminates the request, and develops an alternative solution.

Weick and Sutcliffe (2007) developed an audit (p. 97) to provide some measure of a department’s sensitivity to operations. The audit contains nine questions revolving around the idea of how familiar department members are with other aspects of the department’s operations, how much discretion employees have to solve problems, and how accessible resources are on a moment’s notice. Additionally, Weick and Sutcliffe (2007, pp. 60 – 61) identify three threats to sensitivity to operations.

1. Based on pieces of information in the case study about not hearing radio traffic and the recommendation to check portables, it is likely the reporter was on the wrong radio channel. How can the routine of morning checks lead to mindless actions contributing to near misses at an incident later in the day?

2. The rapid intervention team (RIT) acted on behalf of the initial attack group without direct orders from the attack group to do so. Discuss how this relates to the concept of comparing what is actually happening to what is supposed to be happening.

3. Thermal imaging cameras (TICs) are becoming common fire service tools. Many of us have experienced using them, yet there is less education on how they work. Does this contribute to common misunderstandings or misbeliefs about what we can and cannot see in some cases?

4. How does the previous idea relate to the concept of treating experience and education equally?

1. It is easy to go through normal morning checks (or any other routine) mindlessly and miss a radio that was on the wrong channel from a previous fire, being bumped, training, and so on. The ramifications of such a simple mistake are potential life safety threats on the fireground.

2. The RIT recognized that what was supposed to be happening was not what was actually happening (sensitivity to operations). It acted properly based on this recognition, which saved the attack group.

3. Being well trained with a TIC (or any equipment) and its use is a basic part of sensitivity to operations because you must be well trained and understand your equipment to understand when it is not working properly–being able to realize that what is being seen through the TIC is not actually what is going on in the environment.

4. Education (classroom training) provides the background, whereas training provides the experience. In this example, education provides the understanding of how an imaging camera works, which helps those using it to better understand the tool. Education also helped the RIT understand what should be happening and recognize that something different was actually happening. Because team members were obviously well trained and had good situational awareness, they acted decisively to intervene. In this case, experience probably also played an equally important role in the decision making.

The next installment of this column discusses the fourth HRO principle – a commitment to resilience. We would appreciate any feedback, thoughts, or complaints. Please contact us at tailboardtalk@yahoo.com.