Our last article discussed a commitment to resilience, which essentially means ensuring enough resources exist to handle unexpected errors. We have finally reached the fifth and final principle of a higher reliability organization (HRO)–deference to expertise. Have you ever had a new firefighter give an idea or suggestion about “improving” the way the department operates? What was the reaction? Was the firefighter told to keep his or her mouth shut and ears open? Or, was the suggestion discussed based on its merit regardless of the seniority or rank of the person suggesting it?

This month, we talk about doing just that by deferring to expertise regardless of the seniority or rank of the person. Everyone in your fire department, whether they are brand new or the most senior members, has special skills. Deferring to expertise takes advantage of each individual’s skills and uses them in the situations in which they fit best. Generally, the fire service says that our people are our most valuable resources, so we should demonstrate a commitment to that idea by engaging and using our people–our resources.

The first three HRO principles we covered attempt to prevent failures. Last month’s and this month’s principles cover reacting to those errors when they occur, which includes deferring to expertise. 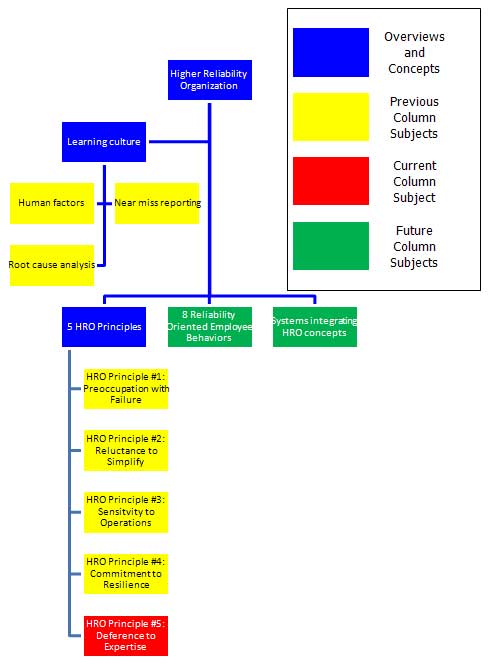 Where We Are: HRO Principle #5 Deferring to Expertise

We understand that many situations in which we work do not allow for lengthy discussions, especially on an emergency scene. Our work environment necessitates making decisions under tight time constraints, high workloads, dynamic situations, and with a lack of information. These factors give us a sense that seeking out expertise is unrealistic. However, these factors are the very reasons seeking out these resources is so important.

If an officer knows the crew’s areas of expertise, then seeking out expertise is not a time-consuming task. Officers will be able to quickly identify the persons who have the best skill set to handle the emergency and put them in a position to begin solving the problem more effectively.

For example, the fire service practices deference to expertise as a part of normal operations when dealing with hazardous materials or medical emergencies. One reason this happens in these situations and not as often at fires is that firefighters learn early in their training to slow down at these emergencies. However, we can still access these skills during time-constrained emergency scenes (e.g., a fire) if we know our crew’s skills and talents. This starts at the fire station before an emergency by getting to know each other and by encouraging all crew members to speak up on scene when something important or hazardous arises. Then, we can start using it en route by asking questions while sizing up the situation.

Another way of looking at this might be a company officer’s informing incident command of a unique skill one of the crew’s firefighters has that would aid in resolving the situation. This provides the opportunity for the incident commander (IC) to gather specific, relevant information to improve decision making and resolve the incident more effectively–leading to increased safety and reduced property damage.

It is important to understand why it is important to push decision making to the lowest possible level. An (IC) develops situational awareness of the entire scene to ensure units do not perform conflicting operations. However, those performing the operation have a better understanding of the immediate problem affecting them and the possible solutions.

The fundamental variable often lies in communication. Information is filtered for various reasons as it passes up the chain-of-command so that the message an IC receives may not resemble the original message (ever play Telephone and pass a message around a circle?). Therefore, rank and seniority sometimes become disconnected from expertise in dealing with the specifics of an emergency. Forgoing rank and seniority, when necessary, in exchange for the expertise of those with specialized skills improves the probability of success because of the synergy created by using a “collective brain.” (Ridley, 2010)

Pushing decision making down and engaging those with expertise is a win-win situation. The incident ends more successfully: improving the IC’s reputation for solid scene management, rewarding the firefighter who feels engaged by being sought out as an active resource at an emergency, and enabling the incident command system to work as it was originally designed, from bottom to top and top to bottom.

The following case study is from www.firefighternearmiss.com. The near miss report, 11-0000216, is not edited. We were not involved in this incident and do not know the department involved, so we make certain assumptions based on our fire service experience to relate the incident to the discussion above.

1.   What are the skills and talents of each of your crewmembers on your shift at your station?

a.   What types of emergencies do those skills apply to?

b.   How could their skills be applied (specifically) at those scenes?

2.   We are NOT encouraging freelancing, which this may initially appear to be. How does someone at the bottom of the ICS chart make sure this does not become an example of freelancing?

1.   The answer is dependent on your crew’s knowledge, skills, and abilities.

2.   ICS originally allowed for some variability in the actions performed. The key is to communicate any of those actions up the chain of command. Therefore, someone involved in rescuing the firefighter needs to pass that information up the chain of command. Why, you may ask? Doing so will prevent the IC from committing additional crews to interior search–a crew highly committed to success since they are searching for a fellow firefighter.

We started our higher reliability organizing column by describing the major components of an HRO. We have described the basics of the fundamental component of constantly learning. This month’s column finishes describing the five HRO principles as described by Karl Weick and Kathleen Sutcliffe. We have tried to tie each of these ideas into examples and many of those ideas tied to the people in our departments. We are now going to look at eight specific behaviors an HRO should try to develop in their employees to support the five HRO principles. These same behaviors are used in the systems building an HRO (e.g. ICS). So, our next installment will begin describing the eight “Reliability Oriented Employee Behaviors” identified by Jeff Ericksen and Lee Dyer. We would appreciate any feedback, thoughts, or complaints you have. Please contact us at tailboardtalk@yahoo.com .

Tailboard Talk: Is Your Fire Department Fat, Dumb, and Happy?