Firefighters are working at a three-alarm apartment fire on the top floor. The fire is in a three-story, wood-frame apartment building built in the early 1990s (e.g., truss roof). Crews aggressively attack the fire within the context of a strong Incident Command System (ICS) organization that develops great situational awareness among all of the crews operating on scene. Suddenly, the roof partially collapses, and a firefighter issues a Mayday because the collapse cuts off his retreat. He appears at a third-floor window, so a crew on the ground, without an order from command, brings a ladder to his window and removes him to safety. Is this freelancing or showing initiative? Is it freelancing if the situation is not a Mayday or ends unsuccessfully? Why might it be labeled differently?  It is easy to label events gone wrong as freelancing. We know freelancing is bad, but do we have a tendency to overlook positive outcomes of freelancing by calling them heroic or using them as an example of taking initiative? Does the outcome of a situation determine what we call our operations?  It often does.

We often label firefighters who were in the right place at the right time heroes or great firefighters, but those who were in the wrong place at the wrong time are often labeled as poor firefighters. We are not leaving good firefighting to luck or saying that intelligence, skills, experience, and training do not make for better firefighters; we are just saying that sometimes the outcome of a situation is beyond our control and luck can determine how the situation is looked at in the future. It stems from a societal norm dating back to the 1400s, judging an action on the outcome (Dekker, 2011) …but that is a whole other can of worms to open in another article.

Our last article introduced communication barriers and solutions, the second of the eight Reliability Oriented Employee Behaviors (ROEBs) developed by Jeff Ericksen and Lee Dyer of Cornell University (2004). We move forward this month by looking at the third of these important employee behaviors, the ability to initiate. For us in the fire service, this simply means that fire personnel with the ROEBs we are discussing have developed an ability to recognize an adverse and unexpected event and to react to it appropriately. 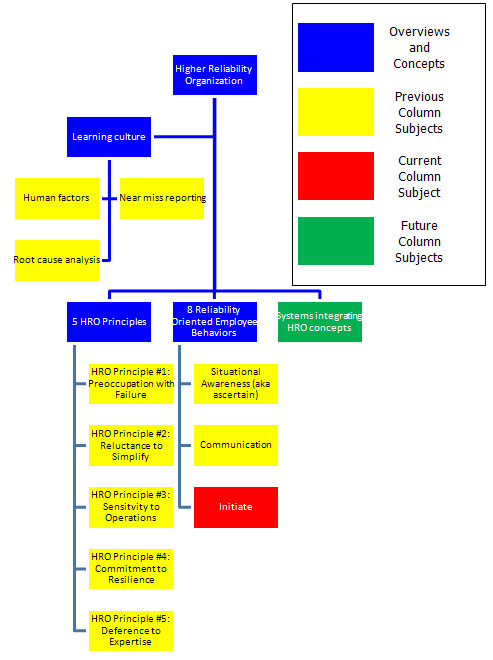 ICS is about allowing firefighters to react — to show initiative — on the fireground. The difference between freelancing and showing initiative is that firefighters properly reacting to a situation and showing initiative will communicate their actions and intelligence to command, whereas a freelancer would not communicate what is happening. Firefighters reacting to a situation because of their situational awareness do so appropriately and safely and then pass their actions up the chain of command to maintain everyone’s situational awareness.

However, ICS is only a tool. Using it does not automatically develop situational awareness, so we need to be aware of impending problems that may indicate a need to reassess and regroup. We have developed a working list of “flags” through researching and teaching fire service materials. We have then put them to use by applying them in our fire service work to make our operations safer and more reliable. These flags are not intended to be a comprehensive list but are some examples of events that should trigger a light bulb in your head warning you of potential hazards because they indicate that situational awareness is being lost. Therefore, these factors are indicators of a scene that may be escalating and should cause firefighters to consider regrouping. They include the following:

Let’s put these indicators into a story to illustrate where they may appear. Units respond to a report of a fire with a child trapped on the second floor (flag — event involving children). We know that calls involving children are one of the most likely to trigger stress in firefighters, which “uses up” decision-making space in the brain, contributing to poor decisions. This is like a big software program running on a hard drive in a computer that causes everything else to slow down. Child calls cause us abnormal stress, reducing our ability to make appropriate decisions and to rush or take unusual risks.

The first unit arrives on scene to find a fire extending toward the front of the house, from the kitchen on the first floor; neighbors are saying children are in the house. The captain feels a need to rush into action (flag — rushing) but feels overwhelmed by the decision process (flag — overwhelmed) of attacking the fire or performing vent-enter-search (VES) because of the stressors. The captain chooses VES because of a single-task focus on rescuing the children at the expense of protecting the crews searching above the rapidly advancing fire (flag — single-task focus). We are not saying this is the right or wrong choice; we are only illustrating the decision points and how the flags may appear using an example.

The battalion chief arrives and begins making sense of the situation. He recognizes that the VES crew has been gone longer than expected and should have appeared by now (flag — something should have happened that did not). The chief recognizes that the crew may be in trouble, steps back for a second to assess resources and regroup, then redirects crews to attack the fire to protect the VES crew that may be in trouble upstairs.

The thing about flags is that they are subtle. None of these flags typically stands out on its own. Unless you are in tune with your own personal flags, you may miss them. Think of the times things did not go well. Now think about what your flag might have been for that situation. The above list of flags comes from many sources; it is not comprehensive or intended as a “safety list.” We developed this list from our personal experience and case studies. They are often lessons we or others have learned the hard way. To find flags, simply follow events backward when things went wrong and look for signs that might have been noticeable earlier had someone been looking for them.

The last type of initiative we are going to discuss is asking for help when you are unsure of what is happening or the incident is growing too fast. Incidents grow exponentially; yet, we typically add resources linearly. Often, there are not enough resources on scene until the incident has peaked and you catch up with it on the down side. How often have you heard an IC go straight from a second alarm to a fourth alarm? It seems like we add a second, then a third, and then, begrudgingly, a fourth alarm–almost as if in defeat. However, each consecutive alarm means pulling resources from farther away, so the time until resources arrive is increasing at the same time the fire is growing.

One sign of an expert is he recognizes his limitations. (Klein, 1998) An IC asking for help, whether it is more personnel or personnel with specialized knowledge, is not a sign of weakness. It is, rather, a sign that you are an expert decision maker who recognizes your limitations.

Sometimes, a scene is going to continue escalating regardless of how well you react. In this case, stopping and regrouping shows initiative. The Phoenix (AZ) Fire Department showed great initiative on a medical call, transforming it into a hazardous materials call.  In this video, we see the firefighters taking initiative by recognizing that things weren’t making sense (flag, regrouping and getting more help.  They use all of the types of initiative discussed here on one call. Check out the video on YouTube at Phoenix FD CO2 incident video as part of this month’s case study.

We are going to change our case study format this month. We pulled a near miss report from the national Firefighters Near Miss Web site below, but we are also including a link to a 20-minute video of the same incident from the Phoenix Fire Department (thanks, Phoenix FD for sharing this). The firefighter near miss report number is 11-0000303. Then link to a video about the same incident at YouTube (http://youtu.be/eY__H-CMvw0).

Next month’s column studies the fourth reliability oriented employee behavior of deploy. Deploying focuses on switching tasks and roles quickly so that helps arrives where it is needed, when it is needed–something the fire service does well. We would appreciate any feedback, thoughts, or complaints you have. Please contact us at tailboardtalk@yahoo.com or call into our monthly Tailboard Talk Radio Show on Fire Engineering Blog Talk Radio.