Often, because of tradition, new firefighters begin their career in a fire academy or some other type of organized training by practicing the same skills over and over and over. We pull hose, bed hose, pull hose, bed hose, pull hose, bed it, and then pull it again. We throw a ladder, take it down, throw it again, take it down, and throw it again. We practice each critical firefighting skill until it becomes second nature. The combination of being young and feeling confident in our skills leads many to exude this confidence toward the end of the training–some may even become cocky. After graduation, the new firefighters move to a fire station and begin responding on calls. In their mind, life is going to be easy because all of the training is done. Right? It is likely, however, that the firefighter finds a company officer who continues drilling the skills (hopefully). It is also likely that senior firefighters knock them back a couple of notches. It seems like some of our senior personnel enjoy reminding “the kids” that they are lower than pond scum. Although members’ intent in knocking down “the kid” a few notches may be good, this may fit the definition of hazing. Some of this process is great; in fact, processes with similar intents should be used all the way up the promotional ladder. Learning, this month’s Reliability Oriented Employee Behavior (Ericksen & Dyer, 2004), is about learning a skill so well that it becomes second nature. Thus, we do not fail under pressure, not only as firefighters but also as a fire department.

This example illustrates how individuals learn to excel; but, can a fire department learn in a similar way? A successful business becomes successful through ongoing learning. Can a fire department do the same? The concept is more complicated with a fire department or business, but it is still possible. Can you think of positive examples in the media of departments implementing new programs to improve services? These are examples of learning departments improving operations based on what they learned. Employees in a successful business practice processes proven to work until they become second nature. The business or fire department looks at less successful processes and learns where there are weaknesses or opportunities in their services, products, or organization. It is an ongoing cycle of implementing improvements and starting the learning cycle over again in an effort to always be at its best. This is similar to many aspects already practiced in the fire service such as near-miss reporting, tailboard talks, critiques, and after-action reviews.

You may be asking, “Why are we being compared to a business?” One reason to compare the fire service to a business is because businesses provide goods or services to customers much as a fire department. Do you consider your fire station a place of business? Or is your fire station a home-away-from-home where things carry on today much as they did 50 years ago? How many successful businesses are still doing things the same today as they did them 50 years ago and are still around? Today’s competitive, free-market environment makes the second choice a slow road to failure. As individuals, we may face the challenge of making it down a hot hallway to an open door leading to a fire room, but we still face it even though it may not be easy or convenient. A fire department that does not learn to become better is the same as staying outside and watching the apartment burn to the ground. Maintaining the status quo is failing when compared to other departments in the industry that are moving forward. (Oakley & Krug, 1994) A successful business provides a valuable service or product to its customers by constantly learning what works and what does not; what the customer considers valuable; and which processes are most effective. The fire service can use similar processes to enhance what is already in place and expand the learning behavior beyond the fireground.

Combining our tradition of training until skills become second nature, tweaking our tradition of hazing into something more effective, and looking at our service as a business can all help us improve our value to the community while improving our safety–all occur through constant learning. 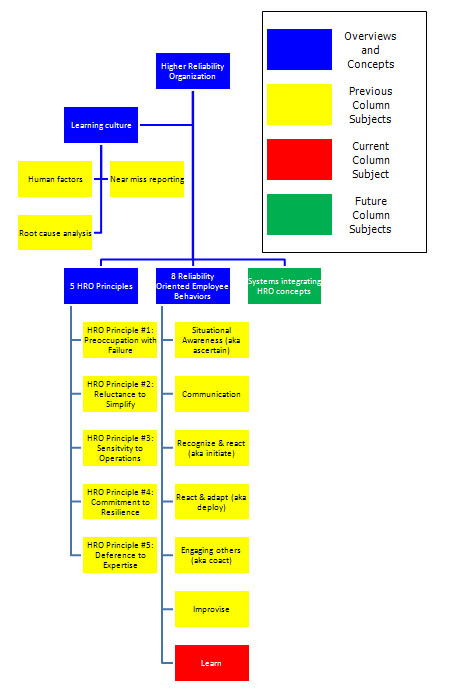 Successful businesses use systems to repeat success. One system used in a variety of high-risk industries is higher reliability organizing (HRO), which is the topic of the Tailboard Talk column. The cornerstone of an HRO is ongoing learning. A constant drive to learn as a firefighter, company, shift, and department is a fundamental behavior for safety, success, and higher reliability.

The fire service has a history of testing for and hiring the most qualified individuals. However, learning about the profession should not stop until the day of retirement; and for those who are successful in the fire service, it does not.

Emerging Systems Successful Departments Will Consider in the Future

One of the most common internal behaviors seen in the fire service is overtraining on critical tasks. We put on so many self-contained breathing apparatus, pull so much hose, and throw so many ladders that we can do those tasks without much thought. This enables us to perform critical tasks and process other information at the same time because we have overtrained on them. We have learned them so well that we can perform at a higher level by accomplishing more.

Another behavior is our internal ability to knock down someone who is overconfident. Although the intent is right, the method usually involves some form of hazing. Not only is hazing unacceptable in a professional sense, but it also reduces long-term trust and negatively affects communication. However, overconfidence is a dangerous behavior that affects one’s ability to learn, so finding an effective way of keeping overconfidence in check is important as well.

After-action reviews and tailboard talks are increasingly common. It is critical to the process that we learn from them, whether successes or failures. Tailboard talks help a crew learn, and formal after action reviews help the department learn. In the case of near-miss reporting, the entire fire service can learn by reporting incidents at the Firefighter Near Miss Reporting System.

We are guessing that at some point in every reader’s career you have brought an idea forward and heard, “That won’t work here” or “Why would we want to do that?” Unfortunately, resistance to change is normal no matter where you are–contrary to popular belief, the fire service does not have the corner on the market. Also contrary to the popular saying, “125 years of tradition unimpeded by progress,” the fire service does adopt many successful changes. The difference between successful fire departments and less successful fire departments, though, lies in the capability of an organization’s leadership to overcome the resistance and bring positive change to the organization. This often happens in successful organizations where members are involved with the change by learning why the changes are important to their success and have a say in how the change is implemented.

Being aware of and learning about a fire department’s surroundings also promotes the learning behavior and increases the success of the fire department. Some easy ways for fire departments to encourage their personnel to learn is by formally encouraging members to look at fire industry Web sites (like Fire Engineering), articles, and books. Personnel can also learn when encouraged to attend training conferences and schools. Articles on emerging trends in other industries are even important because some outside operational ideas and technologies may transfer well into the fire service. Talking about these ideas over the kitchen table or at a meeting could turn into to the next successful idea for your fire department.

Everyone likes to call themselves progressive as long as they don’t need to change.

Being aware of the department’s surroundings also means learning about local city, county, and state politics. How is a new initiative at the state level going to affect the city council’s decision making on staffing? Will it affect money available for training? How can we offset some of the impact?

Last, no single fire department can have enough incidents on every kind of call to build data from which to learn. So, it is helpful to look outside your department at how other departments have succeeded or failed and what was learned from the experience. What operations are most effective? What programs work well?

The following case study is from www.firefighternearmiss.com. The near miss report, 05-0000218, is not edited–with the exception of highlighting the relevant points in this particular case because it is longer. We were not involved in this incident and do not know the department involved so we make certain assumptions based on our fire service experience to relate the incident to the discussion above.

1. What were some of the things learned at this incident?

2. What are some things this department could do to improve learning?

3. In what specific areas do they need members to learn?

4. What learning systems does your fire department use?

2. Provide more training, a better attempt at keeping crews intact; arrange seniority throughout the department to prevent too many junior people from working together at the same time.

Our last article introduced improvise, the sixth of the eight Reliability Oriented Employee Behaviors (ROEBs) developed by Jeff Ericksen and Lee Dyer of Cornell University (2004). Improvising is the ability to use innovative techniques to solve a problem, often a solution stemming from the learning behavior discussed this month. This article discussed the employee behavior of learning, which is the central building block for any organization to be successful. Next month’s column discusses the eighth and last reliability oriented employee behavior of educating. We would appreciate any feedback, thoughts, or complaints. Please contact us at tailboardtalk@yahoo.com or call into our monthly Tailboard Talk Radio Show on Fire Engineering Blog Talk Radio.