In such a complex, fast-changing world, a reluctance to simplify seems counterproductive. We live and work in a complicated world. We also know that complex, complicated environs are ripe with opportunities for mistakes because complicated environments are difficult to understand, leading to a lack of situational awareness. So, simplifying reduces the chance for error. Or, does it? A higher reliability organization (HRO) simplifies reluctantly. Why? Because, an HRO realizes that simplification means generalizing, which contributes to complacency and reduced situational awareness.

Our last discussion, as illustrated below, centered on HRO principle #1: a preoccupation with failure, which is important because an organization focusing on its failures is better prepared to deal with problems in the future. Remember from the last article that a routine is only a solution to a previous problem that may not solve a future problem.

Where We Are–Principle #2: A Reluctance To Simplify.

We move on this month with HRO principle #2: a reluctance to simplify. 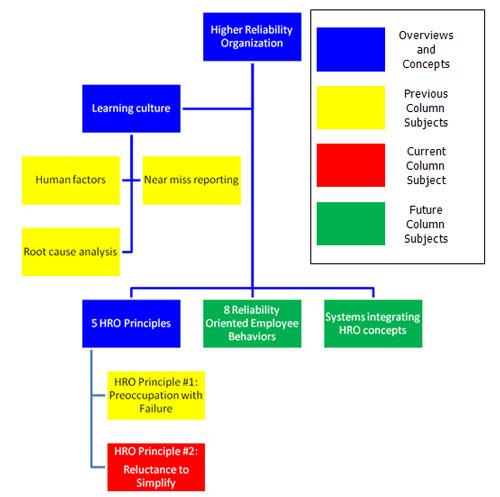 Simplifying tasks can mean increasing unfamiliarity. Weick and Sutcliffe (2007, p. 39) write, “… it is impossible to manage any organization solely by means of mindless control systems that depend on rules, plans, routines, stable categories, and fixed criteria for correct performance.” Thus, a reluctance to simplify means

An example of recognizing routine that limits exploration involves some of our regular equipment checks. We check our medical bags daily, which leads to a common simplification of placing ties on zippers of compartments used less often; if the tie is not broken, then the compartment is ready. This obviously increases our daily productivity, but the routine limits exploration. We begin losing our situational awareness as we become less familiar with what is in each compartment of the medical bags.

It is important to recognize that creating labels and categories limits understanding. That is because generalization, especially when used on emergency scenes, can lead to reduced situational awareness and confusion. This problem is magnified at scenes with more than one agency or department. Training with checklists during interagency events is important to ensure words mean the same thing to everyone. However, it is important to avoid becoming over-reliant on checklists.

Asking “Why?” is a simple way to remain reluctant to simplify; it develops constructive conflict, which is fundamental to simplifying for the right reasons. Asking, “Why do we do it this way?” and receiving, “Because that is how we’ve always done it,” for an answer is not sufficient and should raise a warning flag. Instead, the answer should be, “because the way we do it is safer, more efficient, or more effective.” Basically, there simply needs to be a good reason for why something is done a certain way. As an example, imagine this conversation:

Mom:  “You start by cutting both ends off of the roast for the best results.”

Mom:   “Because Grandma always did.”

Son asks Grandma: “Why do you always cut both ends off of the roast? Does it make it better?”

Grandma: “No, I just don’t have a pan big enough to fit the roast without cutting the ends off.”

This shows why asking “Why” is so important to improving a fire department’s operations in a humorous scenario. However, grandma does not operate in a life-safety environment, so as ridiculous as the previous conversation sounds, it illustrates that it is even more critical for us in the fire service to use constructive but positive criticism in a constant effort to improve. A diverse employee pool also improves this situation because various backgrounds, education, training, and experience bring different “why” questions. In essence, it is avoiding the “moth to the candle” syndrome at a command and administrative level from the bottom up.

(This even feels progressive for us, but we’re presenting this material because we believe it will dramatically improve the fire service profession, fire department operations, and the safety of emergency responders. This reaction shows how conditioned we are.)

The following case study is from www.firefighternearmiss.com. The near miss report, 10-0000059, is not edited. We were not involved in this incident and do not know the department involved, so we make certain assumptions based on our fire service experience to relate the incident to the discussion above.

1.     The fire service teaches its members from day one not to question orders at an emergency scene. This is a fire service-wide cultural issue. How did this culture contribute to this event?

2.     Develop a chain of errors (discussed in Tailboard Talk #4) for this event.

a.     Did it lead to cultural issues that are common across many behaviors?

b. Why is the fire intensifying?

c.      Why were the two firefighters exiting the building but not the officer?

d.     Why would the two firefighters separate when looking for their officer?

e.      Why are we not trying to learn from this incident?

2.     The root cause chain of error links may contain

b.     Normalization of risk

e.      A culture of not asking questions at an emergency scene

f.       Training contributing to the culture of normalizing the links a-e above

3.     Three possible points when someone could have asked why or what:

b.     “Is the other crew downstairs making any headway?”

c.      “Why do you want us firefighters to separate and enter an obviously weakened building?”

d.     However, the fire service teaches its recruits from day one to never question command. Only the IC and the safety officer have the authority to do so. This was exactly the mentality of the airline industry several decades ago. Now that their culture has changed, commercial passenger jets crash much less frequently because the culture actually encourages subordinates to ask superiors “why?” This change in culture has been a part of reducing airline accidents by 70 percent or better.

The next installment of this column discusses the third HRO principle, a sensitivity to operations. We would appreciate any feedback, thoughts, or complaints you have. Please contact us at tailboardtalk@yahoo.com .