Our last article discussed a sensitivity to operations, which refers to being sure that what you think should be happening is not clouding your opinion of what is actually happening. Whether on an emergency scene or discussing fire department operations, this means that those at the top of the department attempt to understand the operations at the street level by gathering input from companies applying the administration’s procedures. This also means that operational personnel realize that they may not have available to them all of the information that administrators use to make decisions.

The first three principles, like the one above, attempt to prevent failures. Now, we move on to reacting to failures that do occur with Principle #4: A Commitment to Resilience. 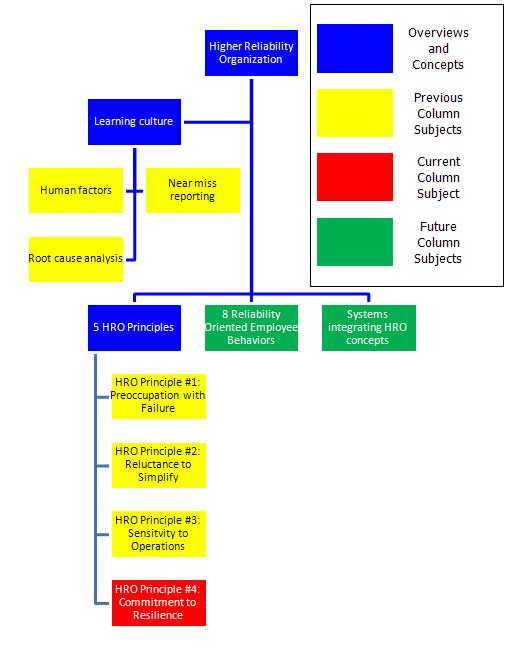 HRO Principle #4 A Commitment to Resilience

1. Seeking employees with deep and varied backgrounds capable of improvising. Resilience is about adapting. A fire service-specific background provides the important technical skills necessary to perform the job. Nevertheless, members with varied backgrounds bring new ideas from outside the fire service box that help us adapt to unexpected failures. Since it is human nature to draw solutions from previous experiences (recognition-primed decision making), combining critical thinkers with a fire service-specific background and critical thinkers with a different background can bring new solutions to a problem. This increases a crew’s or department’s adaptability to inevitable problems.

2. Developing employees through ongoing, scenario-based training that challenges decision-making processes. Psychologist Gary Klein describes an interview with a senior curriculum developer at the National Fire Academy in which the interviewee said, “To be a good commander, you need to have a rich fantasy life.” (Klein, 1998) A rich fantasy life refers to imagining how a future fire might burn in a building and various ways to attack it or imagining how an active fire is behaving and evaluating ways to mitigate the emergency successfully. Realistic, scenario-based training provides crews the opportunity to experience many different situations in a controlled learning environment where they can practice and build adaptability, decision-making and situational awareness skills similar to a “fantasy life,” which builds their repertoire of solutions when confronted with an emergency.

3. Maintaining sufficient resources on scene to react to unexpected emergencies. This third component is likely controversial because it is resource-dependent. However, the third component also becomes an issue because of our assumptions. For example, we may assume that we do not need any more resources; we may assume we can send resources back early; or, we may assume that we can handle it without more help. (We all know what “ass u me” means.) Maintaining sufficient resources plans for the worst and hopes for the best. We should

Questions to ask to begin measuring a fire department’s commitment to resilience include the following:

1.   This case study gives us an opportunity to review sensitivity to operations and transition to a commitment to resilience. What interaction between the company officer and the incident commander is an example of a sensitivity to operations? The company’s delay in finding the fire is not a failure; however, what actions allowed the incident commander to react effectively to the fire once it was found?

2.   What assumptions did the incident commander make to come to the decision to release units before finding the problem? Is this something you may see in your department?

1.   The company officer’s action of noticing the incident commander’s decision to return the other units and suggesting not doing so is an example of sensitivity to operations in action. The units remaining on scene pulled lines and prepared for a fire attack even though the initial signs did not indicate a serious fire, which is an example of a commitment to resilience.

2.   Releasing units prior to finding the problem assumes there is not a significant problem based on the signs. Our profession requires making many decisions based on little information; however, we may become complacent in our decision making and forget to consider possible problems that could be uncovered by further searching.

The next installment of this column discusses the fifth HRO principle–deference to expertise. We would appreciate any feedback, thoughts, or complaints you have. Please contact us at tailboardtalk@yahoo.com .