Scenario: Firefighter Joe, who has two years of experience with the department, walks into the station’s kitchen one morning and says, “You know that problem we’ve had? I have an idea to fix it.” What reply would you expect to hear from anyone sitting at the kitchen table? Would at least one person say something similar to “That won’t work here,” “We already tried that,” or “Get your time in first, kid.” Although these reactions are not as common in the fire service as we like to joke about, they are still more common than is good for the fire service.

Why are new ideas important to the fire service and, more specifically, to your

The root of proactive innovation is the need to develop a culture that believes good is never good enough. Proactive innovation comes from being open to new ideas from a variety of sources, then testing an idea, and possibly implementing it. How do we know if an idea will work for the fire service or a department? One way is to run the idea through the “Idea Machine” to evaluate it based on its merit rather than opinion and anecdotal evidence.

The Idea Machine – a simplified illustration of an idea testing process 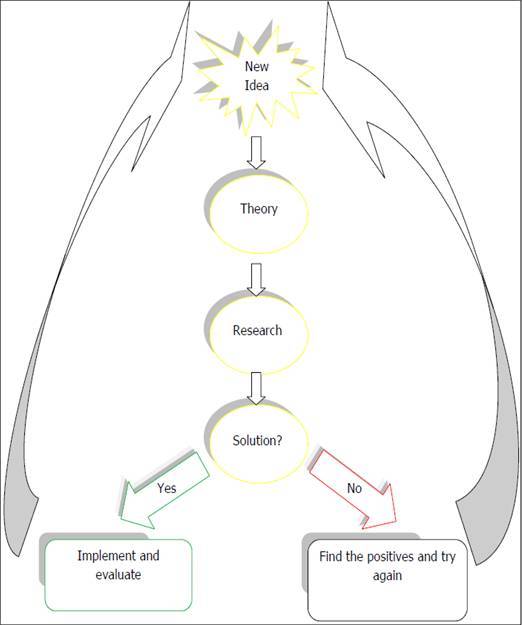 The next time someone brings an idea to you, make a conscious effort to: (1) stop and think about it for 30 seconds before responding and (2) find what would work instead of what would not work.

The next time Firefighter Joe or anyone else in the department comes into the kitchen and says, “I have an idea,” the reaction should be, “Let’s hear it.” Then take that idea; discuss it; tweak it; and develop it into a theory that the company, shift, or department can test based on its merit. If it has merit, then it is worth researching. If the research supports the idea, try to implement it. If the research does not support the idea or the idea fails during implementation, find out why it failed and run it through the Idea Machine again.

An idea not supported by data or that does not have merit helps teach us what does and does not work. Look at it as practice; it is okay if the idea was a failure because failure is about learning. Failure makes the idea stronger because now we know what was positive about the idea, what were its  weak points, and how we can tweak it, We can now run it through the Idea Machine again.