The following report of engines finished and under way is made by the Ahrens Fire Engine company: A second-size engine for Detroit, Mich.; two engines for Cincinnati; the installation of which, will give that city six Continental steamers in service. The fourth Continental was recently delivered to Louisville, Ky., and during the past few weeks, also, contracts have been taken for the second Continental for St. Paul and the fourth of the same kind for the city of Toledo, Ohio. Engines are also under construction for the San Francisco department, and a contract has been awarded the company for a third-size Continental at Merced, California. The following complimentary letter was received by the company from the mayor of East St. Louis, accompanying notification that its bid had been

MAYOR’S OFFICIO. CITY HALL, SILAS COOK. MAYOR, EAST ST. IXHIIS, III., Oct. 6th, 1908. The Ahrens Fire Engine Company. Cincinnati. Ohio. Dear Sirs:—With reference to the late proposals for steam lire engine. I am pleased to advise that your hid to furnish this city one second-size steamer of the continental type is accepted. Inclosed find contract which has been properly executed. and in tendering same to your company, I feel confident that the new machine will fully meet all expectations. The writer recalls that the Continental, which has been giving us excellent service going on four years, is the first engine built by your present company. It has never failed us in any manner, and the excellent record made by the machine has Influenced our choice in the present purchase. Put the same thorough workmanship and general excellency in this second engine, ami be assured, in advance, that everything will then be satisfactory to us. Very truly yours, SILAS COOK, Mayor. 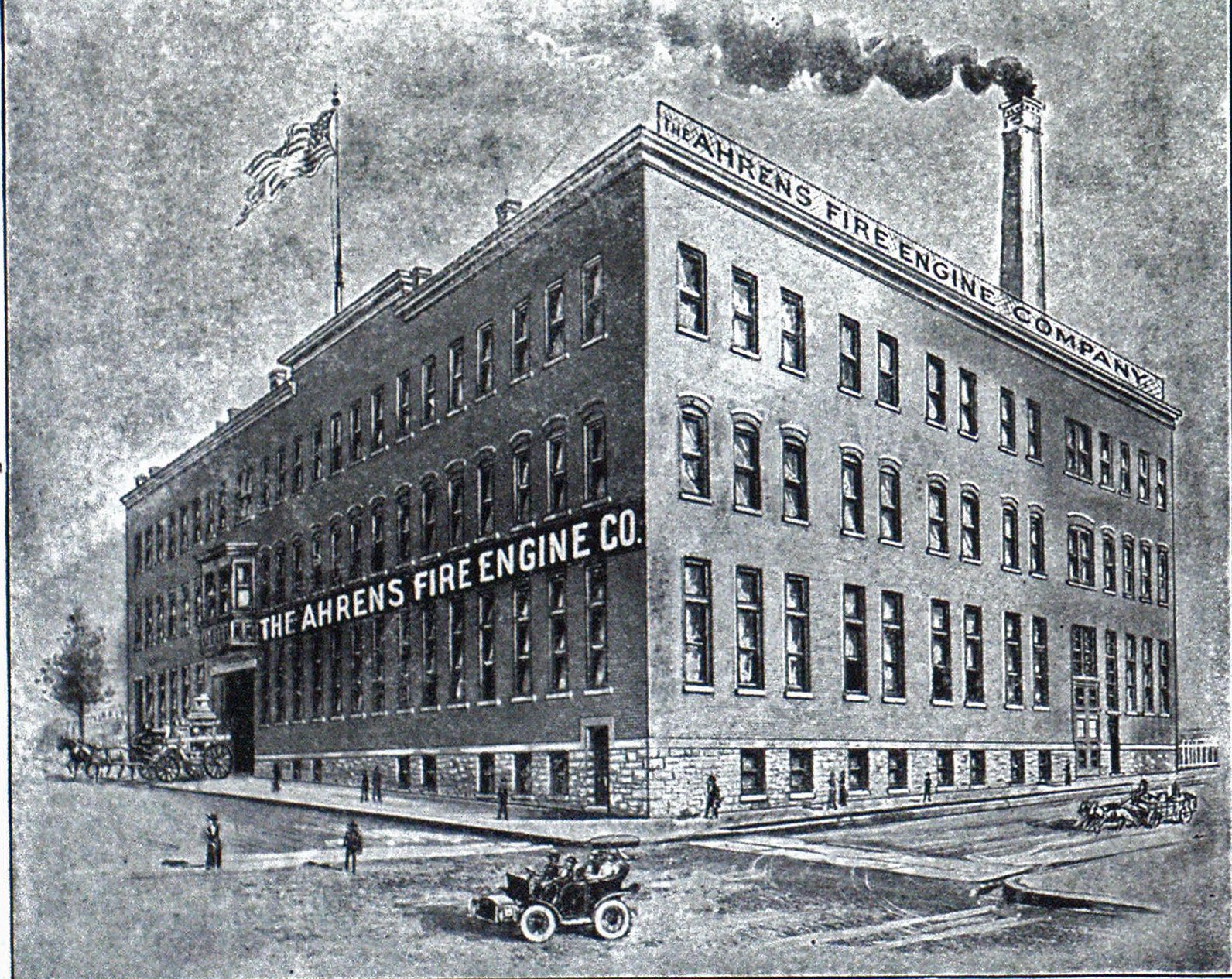 In the three years during which the new Ahrens Fire Engine company has been before the public, the products of their factory have been sold over a wide territory, and the splendid modern plant erected by the company at Cincinnati continues to be heavily taxed with work in rocess. The buildings provided at the outset ave ample floor-space and many special conveniences; but additional machinery is constantly being installed to keep pace with the demand of a business now firmly established and growing steadily. The success of the famous Continental steam fire engines built by the Ahrens company was immediate, and the fifty or more steamers of this type, now in service and widely distributed throughout the country, are all giving exceptionally satisfactory results. Fire department officials and the general public arc not lacking confidence in anything emanating from the Ahrens factories, for, as one of the company aptly expresses the policy of the concern. “Our aim is to avoid the need of subsequent apology for the apparatus which we turn out.” That the Ahrens company’s product commands consideration by prospective purchasers of the best steam fire engines is an under.ialilc fact, and evidently no effort is lacking on the part of the company to give permanency to the good will and the poputa favor which were won so completely in its earlier business experience. The Continental line ol steam fire engines, as originally conceived, cm braced all the elements necessary for a particulai brand of efficiency, which the Ahrens people style as “lasting,” and, while betterments arc constantly being devised and added, as yet, it nas not been necessary to depart essentially from the well determined proportions laid down in the beginning. Contracts recently taken include a cluster of five Continental engines for the city of Cincinnati; one for Louisville; and one each for cities of Detroit, Mich., and Covington, Ky. New engines have been recently delivered to the cities of Omaha, Neb., St. Paul, Minn., Houston, Tex, Dayton, Ohio, Berkeley, Cal., Van Wert, Ohio, etc. Old engines of various types are also being rebuilt for Houston, Tex., Jeffersonville, Ind., Covington, Ky., Decatur and Springfield, 111. The catalogue of the Ahrens Fire Engine com patty is an attractive hook, in which the aims of the company are followed by a concise description of its plant and facilities for handling fire engine work of every descripjion. The merits and features of the Continental steamers are also presented forcibly, both in text and by numerous illustrations. The catalogue will be mailed to all who apply. Visitors to the convention at Columbus, Ohio, who expect to include Cincinnati in their itinerary, are especially invited to call and inspect the Ahrens plant. The telephone number is “West 279;” the offices and the works are located at the corner of Alfred and Cook streets—a point easily reached from the commercial centre of the city, All who can conveniently spend a few hours in the plant of the company will be well repaid by the courtesies always extended to every caller seeking information about anything which pertains to steam fireengines and fire-engine equipment.

LETTERS TO THE EDITOR