The Causes of Fires

In a recent report issued by the president of the Philadelphia Fire Patrol, W. E. Bates, he gives some interesting information as to the origin of fires in that city and the number each cause is responsible for. The greatest number, by far, it seems were caused by the careless handling of matches. Many of these fires, no doubt, were caused by children, through the thoughtlessness of their elders, getting hold of the matches and the almost inevitable result following a blaze. Others were caused by the tossing of a match by a smoker into a was’e basket, the e to smoulder and afterward to blaze up when no one was near. This _____ab’t is a very prevalent one and is t” e ca_____ Rats and mice gnawing the paper boxes and reaching the matches with their sharp teeth is another fruitful cause. If the matches had been in a metal container, as they should always be, the rodents could not get at them. Sparks from locomotives and chimneys are also given as causing many fires, while others were the result of the careless handling of candles; gas jets too near curtains or woodwork, or on swinging brackets—a very dangerous form of light; defective flues; boiling lard, oil, etc., and fireworks. The significant statement is made that the great majority of these fires. 22,295 in number, could have been prevented by proper care and the exercise of judgment and common sense. 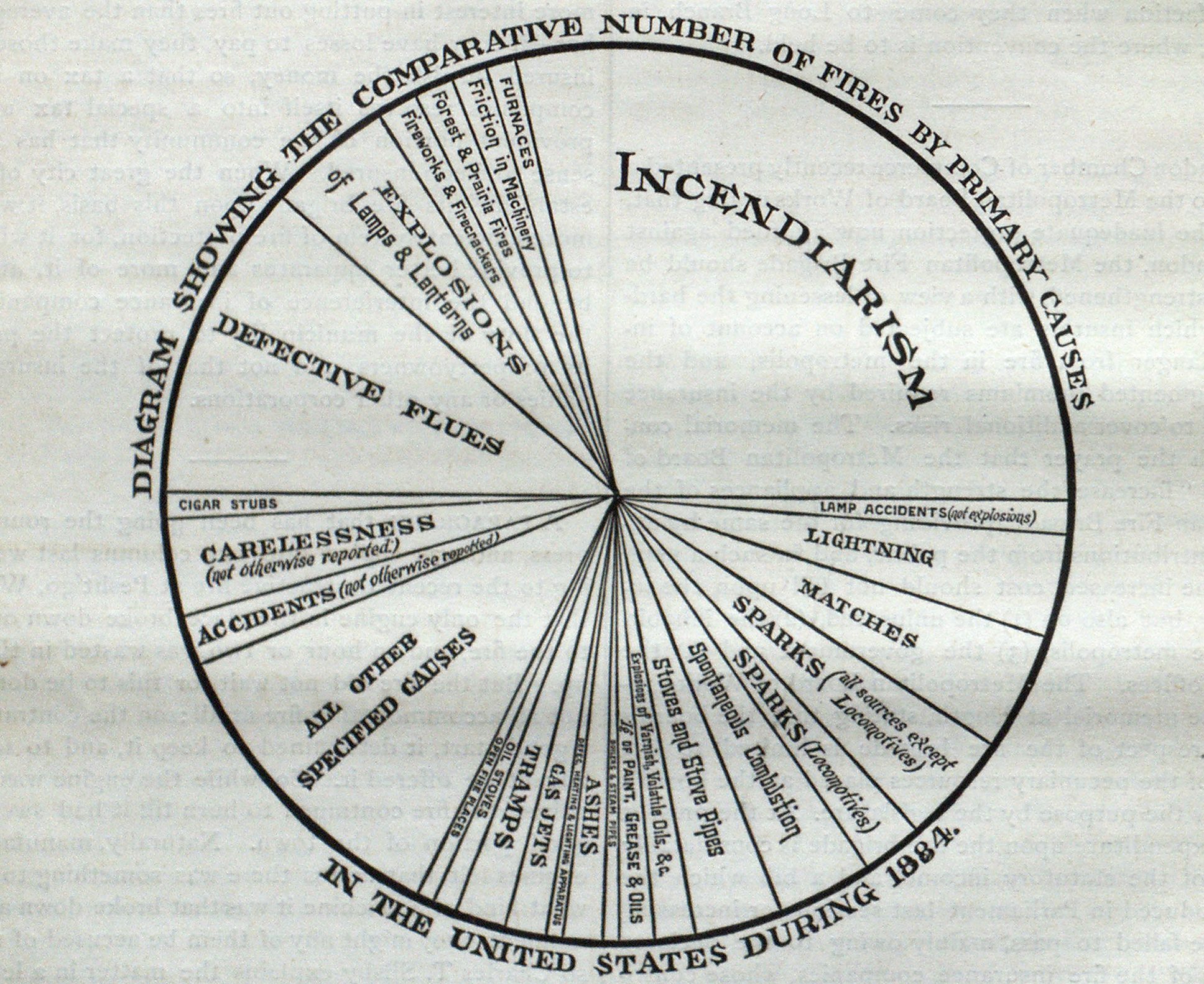 THE CAUSES OF FIRES.

THE more generally the public is made familiar with the causes of the numerous fires that lead to such an immense waste of property annually, the better they the circle do not represent the money losses nor the insurance losses by the different causes given, but simply the relation between them in point of frequency of occurrence. After the two great fire causes, viz., incendiarism and defective flues, the remaining causes may be classed in groups of causes, nearly equal numerically. Thus, lightning, matches, sparks from all sources except locomotives, spontaneous combustion and lamp explosions belong to one class; furnaces, friction, forest fires, lamp accidents, fireworks, explosions of varnish and volatile oils, ignitions of paint, grease and oils, ashes, gas jets, cigar stubs and tramps to another, and open fireplaces, oil stoves, defective heatwill be prepared to apply the remedies necessary to prevent them. Never before has the subject attracted so much attention, and we find the daily press, as well as the scientific and technical journals, devoting much space to discussing the fire waste and the best means of prevention. The Chronicle, an insurance paper of this city, makes a special feature of compiling statistics of fires, and every year publishes a volume specially devoted to the subject. We are indebted to that journal for the diagram herewith given, showing relatively the fires resulting from various causes.

This diagram is constructed from the known causes of fires in the United States during 1884. The segments of ing apparatus, and boilers and steam-pipes to a third. The most striking lesson to be extracted from this diagram— as, indeed, from all exhibits of fire causes—is the wonderfully large number of preventable fires. In fact, it would be hard to say which of these causes was non-preventable, for even the lightning can be controlled to a great exent by the use of well-known appliances. The largest number, as will be noted, resulted from incendiarism, and incendiarism, as is conceded by fire underwriters, is mainly due to over-insurance, which tempts unscrupulous men to set fire to their property. This could be remedied by preventing propertyowners obtaining insurance beyond threequarters of the value of their property. When they have to bear one-quarter of the loss, the temptation to burn is removed.

It is interesting to see among what classes of property these fires were distributed, and here we again cite The Chronicle.

It is singular that the average losses by fires in breweries, flouring mills, foundries, furniture factories and railroad depots should run so close together. It is also curious that the average losses by such dissimilar risks as agricultural implement and seed stores, cooperage establishments and dry goods stores should prove so nearly alike. Indeed, all possible comparisons permitted by the foregoing are, in their way, surprising and instructive. It is contrary to one’s natural guess that such a motley group as carriage factories, churches, retail clothing stores, and country and general merchandise stores should all have average losses varying but slightly.

The class of risk whose average loss comes closest to the average afforded by the whole numberof fires is hotels. This is not the least remarkable fact brought out by the foregoing exhibit.

HAZ-MAT LEGISLATION: THE DEBATE GOES ON