When deploying initial attack hoselines, many urban fire departments opt for a reverse-lay stretch and water supply operation. Performing a reverse-lay offers many tangible benefits on the fireground, including giving firefighters the ability to leave the front of the structure open for the truck and later arriving engine companies; placing the first arriving engine company on a serviceable hydrant; and limiting dependence on tank water. However, many fire departments have opted out of the reverse-lay option in lieu of forward-lays and preconnected hoselines. Using preconnected hoselines limits the engine company’s ability to overcome short-stretches and puts open space at a premium in front of the fire building.

The City of Detroit Fire Department (DFD) uses the reverse-lay exclusively. This stretching and water supply option has become the preferred method based on the experiences of firefighters during the unprecedented fire duty Detroit has endured over the last several decades. The DFD has discovered that the reverselay provides the most efficient means of getting water on the fire. A reverse-lay hose stretch is best accomplished by using a static hose load from the rear hosebed. The DFD employs a unique static hosebed of 1½-inch hose filled out with 2½ inch hose to make up “the Detroit bundle.”

The Detroit bundle is simple to deploy as a reverse-lay stretch:

The Detroit bundle can be assembled with varying lengths. A typical Detroit bundle will have approximately 750 feet of 2½ inch hose with a wye-gate on the end. The “first line” typically contains three to five lengths of 1½ inch hose depending on the alarm district. The first line is preconnected to one side of the wye-gate (with the other side of the wye in the ‘off’ position). With the wyegate positioned near the edge of the hosebed, the 1½ inch hoseline is now loaded in a “reverse horseshoe,” with the center portion of the loop hanging down far enough for the average firefighter to put his arm through the “loop” and “legs.” The legs of the horseshoe run the entire length of the hosebed.

Two of the three lengths are usually loaded as the horseshoe, with the remaining one to two lengths “bundled” in a simple accordion load, approximately three to four feet wide, cinched together with sash-cord with a slipknot or straps. This smaller, first line bundle is set atop the rear of the engine on a shelf or the back step. Some DFD engine companies use only three lengths in their first line, loaded entirely in the horseshoe fashion, leaving only the second line bundle on the back step. 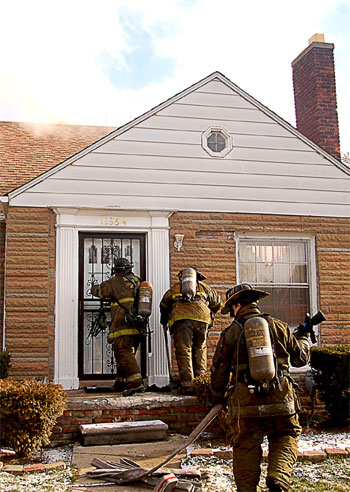 The second line, typically three to four lengths, is another bundle assembled in an accordion fold three to four feet wide with the sash-cord. This larger, second line is set on top of the first line’s smaller bundle on the shelf or back step. The two bundles (first and second lines) are then secured to the engine apparatus via two seatbelt-type straps. Be mindful when using actual seatbelts as straps due to the difficulty in uncoupling the belts’ buttontype release with gloved hands. Furthermore, make sure to use manually adjustable seatbelts to adequately tighten the bundles in place.

To deploy the Detroit bundle: the engine stops in front of the building and the firefighter(s) and boss proceed to the rear of the engine. The seatbelt-type straps are unlatched, and the second line’s bundle is removed and dropped near the curb. Next, the first line’s bundle is grabbed with one arm while pulling the reverse horseshoe loop with the other arm. The firefighter grabbing the first line’s bundle and horseshoe must ensure wye-gate comes off the hosebed. This firefighter may opt to walk backwards pulling additional 2½ inch hose off if needed, or another firefighter may assist with this. 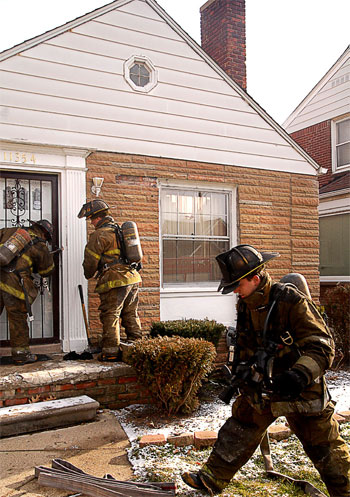 Once the desired amount of 2½ inch hose has been stretched from the engine, the engineer may proceed to a serviceable hydrant. The wye-gate and horseshoe may now be dropped in the appropriate location, dictated by the size, presumed layout, and fire’s location in the building. The firefighter with the first line’s small bundle continues walking towards the front door, which aids in flaking out much of the horseshoe loop. Near the front door or entrance to the fire area, the small bundle is “broken” and flakedout. Care must be taken not to bunch up the hoseline on the front porch or in an apartment lobby, et al. The boss and remaining firefighters can also aid in flaking-out the first hoseline while waiting for the engineer to charge the hoseline with tank or hydrant water. If a second hoseline is needed, the second line’s bundle can be brought to the wye gate on the first line, and the bundle can be “broken” and connected to the closed side of the wye-gate. The second line’s bundle is then flaked out, charged and placed into operation. In conjunction with the need for a second hoseline during a defensive attack operation, the Detroit bundle’s 2½ inch supply hose can be shut down, and a 2½ inch nozzle affixed for an exposure line. Or, the 2½ inch hose may be used to supply a truck’s aerial if necessary. 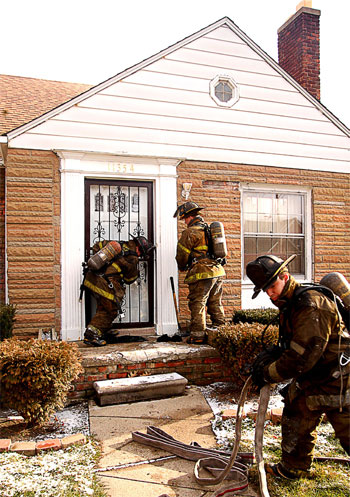 For larger houses or apartment buildings, the wye-gate can be brought up to the entrance allowing for the use of the full length of the bundle. Even if the engine apparatus cannot get close to the front door, all of the hoseline’s lengths are available inside the fire building, something an overreliance on preconnected hoselines may prohibit. The setbacks created by commercial and multi-story apartment buildings’ lot layouts make a short-stretch almost certain with preconnected hoselines.

In the event of a multi-story building fire, firefighters have the ability to stretch many additional lengths of 2½ inch off with the Detroit bundle before the engine proceeds to a hydrant, to get the wye-gate optimally placed. Also, where a hose-roller and/or rope operation is used, the wye-gate can be “roped” to the upper floors, affording the engine company the entire length of the bundle. Stretching-short is virtually eliminated with the Detroit bundle and would be caused only by firefighters failing to properly estimate the stretch. For smaller multi-story buildings, the wye-gate can be left on the sidewalk or front yard to minimize kinks and facilitate flaking-out of the hose. 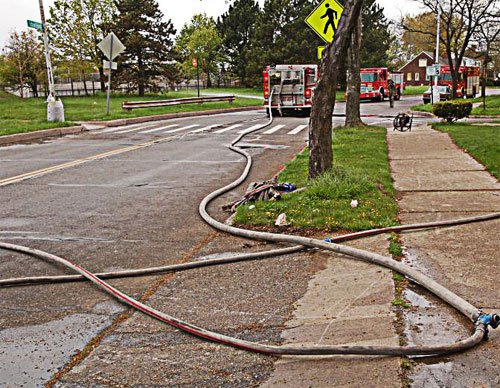 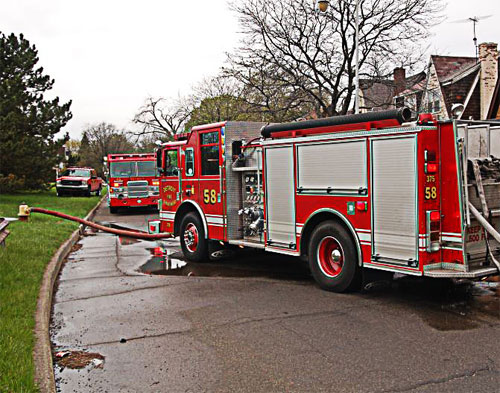 Some final thoughts on the Detroit bundle and its accompanying hosebed of 2½ inch hose: When using a static hosebed, second and third arriving engine companies must BACK down the street to the incident (at least one engine must be facing opposite the first arriving engine). This allows for additional hoselines if needed due to bad hydrants or advance fires upon arrival. All tools must also be removed from the engine prior to the apparatus proceeding to the hydrant. Single-housed engine companies may be on-scene for several minutes and must take the proper forcible-entry tools, ladders, etc. if needed immediately upon arrival. 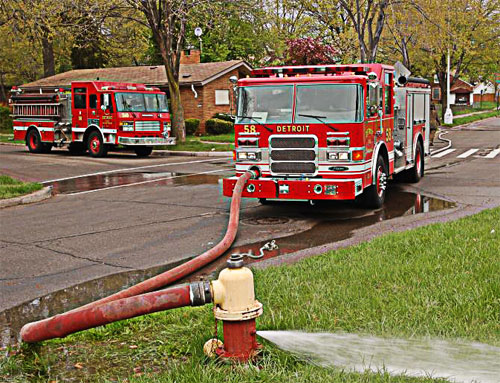 When removing the second hoseline’s bundle, ensure it is set to the curb and not dropped in the middle of the street. This may cause a trip hazard for other members stretching the first line bundle and will block the street for subsequent arriving companies. When removing the reverse horseshoe from the hosebed, ensure that control is maintained with the wye-gate so it does not swing off the engine and cause injury to an unsuspecting firefighter(s). Also, ensure that when “breaking” the first hoseline’s bundle near the front door, flake-out both the horseshoe AND the small bundle. Lastly, when flaking-out the larger, second bundle, be sure to remove all kinks in the hose as accordion folds lend themselves to endless kinks if not fully flaked-out and deployed.