THE FIGHTING OF FIRES WHICH INVOLVE CHEMICAL HAZARDS

For the accompanying article, the ninth installment of which is published herewith, FIRE ENGINEERING is indebted to the Official Publication of the Iowa State College of Agriculture and Mechanic Arts, it being comprised in Bulletin No. 9, Engineering Extension Service:

Acetates. There are many volatile solvents such as amyl and butyl acetates which present serious fire and explosion hazards. Those used in the pyroxylin lacquers are especially dangerous since the lacquer is usually applied by spraying. This allows diffusion of the material in air presenting hazards similar to dust clouds. The pyroxylin base is made up from nitrocellulose which is an additional fire and fume hazard. These solvents and lacquers are common in paint shops and garages. All spraying should be done in an approved booth equipped with automatic sprinklers, Foam, soda-acid extinguishers, and water are very effective on fires in this material.

Carbon disulphide is a highly volatile, colorless, explosive liquid with a disagreeable odor. It is shipped in cars and drums and is used as a rubber solvent, in rubber cements, as solvent in oil extraction and sulphur using plants, in dye plants, in ice manufacture, and as an insecticide. One of its comonest uses is in grain elevators and seed elevators for destroying weevil.

Sulphur subchloride is an amber to yellowish-red oily fuming liquid with a penetrating and irritating odor. It is shipped and stored in jugs, carboys, and drums. It is used in the production of rubber, insecticides, and textiles and in purifying sugar juices. Sulphur dichloride is a reddishbrown liquid shipped in iron drums and used for the purposes similar to the sub-chloride. In the presence of water the sulphur chloride fumes hydrolize to form acid fumes which are very irritating and dangerous. The more water used on these materials the worse the fumes. Leaking containers of the chlorides should be taken to a dump and allowed to diffuse slowly into the air.

Mercury, a metal which is a liquid at ordinary temperatures, is used in manufacture of mirrors and is found in barometers, thermometers, and many recording and control instruments used in power plants and factories. When heated mercury volatilizes forming a very poisonous vapor. Inhalation of mercury vapor in dangerous amounts is usually indicated by a feeling of fullness just back of the bridge of the nose very similar to the feeling when bumped on the nose. A person affected by mercury vapor should get into the fresh air at once and have a physician called.

Bromine is a low boiling liquid, volatilizing to give heavy reddish-brown vapors. It is shipped and stored in glass or earthenware bottles or in glass carboys as a solution in water. It is used in various chemical industries. In contact with organic matter bromine may produce a fire. The poisonous and irritating action of its vapor is similar to that of chlorine. The liquid is corrosive.

Ordinary quick lime frequently becomes hot enough upon wetting to ignite wood and similar materials. Since it is usually shipped and stored in wooden barrels or in bulk in contact with wood, it should be kept dry if possible. Hot slaking lime will cause bad burns if allowed to come into contact with the skin.

Sodium and Potassium. These two metals, which are very similar chemically, decompose water upon contact with it, igniting, with explosive violence, the hydrogen which is formed. The sodium or potassium is frequently scattered over a considerable area. These metals are shipped and stored in air-tight tin cans or under kerosene in cans or bottles.

Magnesium is a very light inflammable metal being particularly dangerous in the powdered form, ft is used largely by photographers and in fireworks manufacture. When in contact with water, hydrogen is evolved, so that water must be kept away.

Oxygen causes more rapid burning and if present in sufficient quantities may cause an explosion. In contact with organic materials it may ignite them. This same action is caused by certain compounds high in oxygen. Nitric acid has been mentioned. The chlorates and perchlorates such as sodium chlorate, sodium perchlorate, potassium chlorate, potassium perchlorate, ammonium perchlorate, barium chlorate, and zinc chlorate; the nitrates of most elements, especially sodium and potassium nitrates; and the peroxides are all likely to cause explosions in contact with alcohol, ether, and similar materials, and when heated with any organic matter. Ammonium nitrate may be exploded by detonation. The peroxides are explosive when in contact with water. Water may be used on the other oxidizing materials.

Solid greases and waxes present less of a fire hazard than the oils but when heated may give off explosive fumes. Since the melted waxes and greases are readily scattered by water, carbon tetrachloride or the foam type of fire extinguishers are most suitable for fighting these fires. Other solid materials such as camphor, borneol camphene, rosin and napthalene give off inflammable vapors when heated. 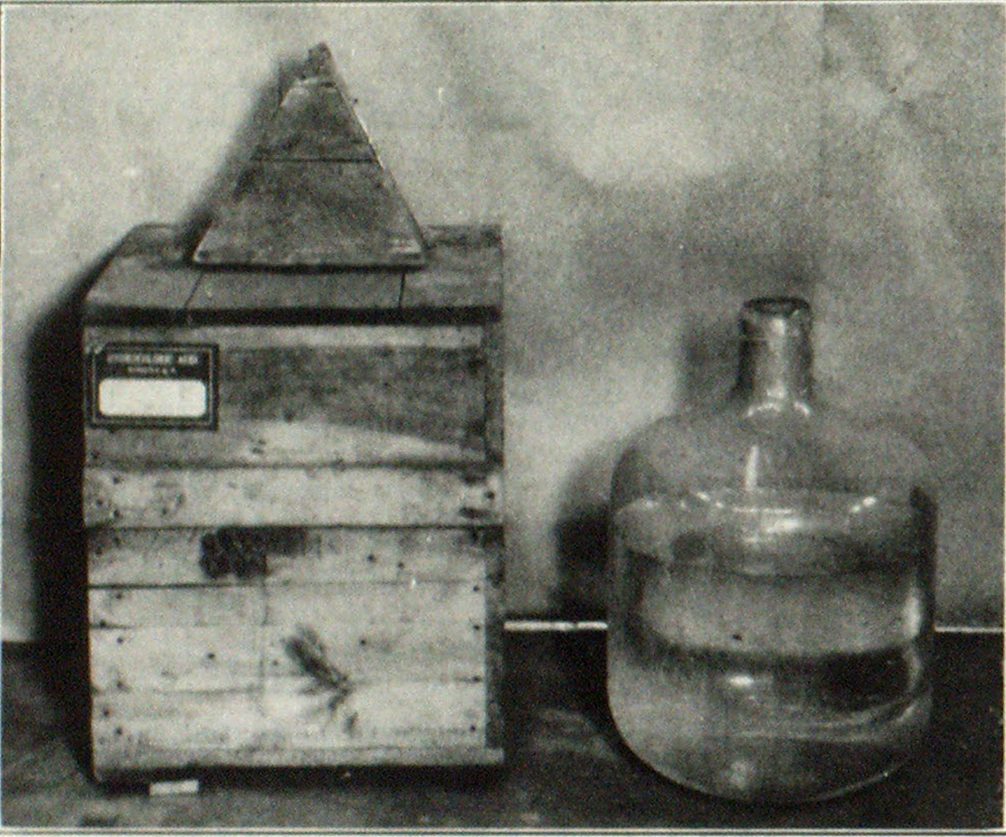 THE FIGHTING OF FIRES WHICH INVOLVE CHEMICAL HAZARDS

This instalment Deals with Chemical Hazards from Liquids—Acids, Oils and Flammable Liquids

For the accompanying article, the eighth installment of which is published herewith, FIRE ENGINEERING is indebted to the Official Publication of the Iowa State College of Agriculture and Mechanic Arts, it being comprised in Bulletin No. 9, Engineering Extension Service:

Liquid acids are shipped and stored in glass bottles of various sizes, in carboys and in special tank cars. Carboys are glass bottles holding 12 gallons and enclosed in individual wooden boxes as shown in Fig. 5. The space between the bottle and the box is usually filled with straw or other packing material. The neck of the bottle projects through the top of the box and is protected for shipment by a wooden cap.

All of the acids are corrosive in their action on the skin. When splashed onto the skin they should be washed with large amounts of water. Since sulphuric acid heats intensely and may become explosive in its action upon the addition of a small amount of water it should first be wiped off with any sort of a cloth and the skin washed with large amounts of water. Dilute alkali or preferably sodium bicarbonate may be applied to neutralize any remaining acid and the injured spot treated as an ordinary burn.

Sulphuric acid gives off poisonous fumes when heated. If spilled in large quantities, turning on water may result in spattering the acid over a considerable area. After the acid becomes diluted further water may be safely added which will reduce the evolution of the poisonous fumes.

Hydrochloric acid produces irritating poisonous fumes when spilled, especially if heated. Diluting with a large amount of water will reduce the fume hazard.

Nitric acid when heated or spilled upon metal, wood, or carboy packing material such as straw gives off the dangerous nitrous oxide fumes. If the acid can be diluted with a large amount of water immediately upon spilling, the fumes will not form. Nitric acid being a strong oxidizing material may add to the intensity of the fire. In contact with organic matter it may start a fire. Like sulphuric acid it causes painful burns.

Acetic acid is not so common as the other acids but is shipped in the same type of containers. The vapors are flammable. At high temperatures acetic acid is converted to acetone which is explosive. Acetic acid forms an explosive when mixed with chromic acid. It is very corrosive in contact with the skin.

Oils, greases, waxes, and similar materials vary from light gasolines and napthas to fuel oils, lubricating oils, waxes, tars, and asphalt. Incipient fires in small amounts of the materials or in oily, greasy rags may be effectively extinguished with carbon tetrachloride or foam. Large fires must be treated individually, no one procedure being the best for all fires. The most effective fire fighting begins before the fire in the preventive measures which should be followed. Special fire fighting equipment for applying steam, foam, or carbon dioxide directly to oil storage tanks has been developed. This and refinery equipment of specialized nature are beyond the scope of this article but the information concerning them is available from the fire underwriters and equipment manufacturers.

The flammability and explosibility of these materials depend upon the volatility and amount of oxygen present. It is well known that at ordinary temperatures gasoline is much more readily ignited or exploded than lubricating oil. It must be remembered however that at higher temperatures the heavier oils and greases may become readily explosive.

The amount of oxygen mixed with the vapor of the oil determines its explosibility. Gasoline is combustible only in mixtures containing 1 to 6 per cent of the vapor mixed with air. The best explosive mixture contains about 3 per cent gasoline. Mixtures of gasoline and air containing less than 1 per cent or more than 6 per cent gasoline will not burn. At ordinary temperatures the vapor over gasoline in a tank is too high in gasoline to be explosive. The vapor over kerosene and lubricating oils is usually too lean to be explosive but becomes explosive upon heating. Tanks with distillate and some crude oils usually contain explosive vapors at ordinary temperatures.

Furfural is a liquid varying in color from very light yellow to a dark brown with a characteristic irritating odor. It is similar in volatility and fire hazard to kerosene although when heated it is very inflammable and explosive. It is used in manufacture of plastics, lacquers, dyes, insecticides, and paint removers and is shipped in steel drums and tank cars. Although oily in nature, furfural is soluble to a slight extent in water so that water can be used upon it with better effect than upon oils.

Benzol, or benzene (not benzine), is a coal tar product used in chemical plants, rubber factories, and for blending with gasoline as motor fuel. It is similar to gasoline as a fire hazard. The fumes are poisonous.

Alcohol in the denatured form is shipped in metal cans, drums, and tank cars. It is used in a wide variety of chemical plants and is extensively stocked in drug stores, garages, and filling stations. It is intermediate between gasoline and kerosene as a fire hazard. Alcohol fires may be safely fought with water since the alcohol is readily soluble in all proportions and when diluted sufficiently will not support combustion. The fumes are explosive.

Turpentine is a colorless, oily liquid with a characteristic odor. It is used extensively as a paint constituent and thinner and is stocked by paint shops, hardware stores, and drug stores. It is shipped in cans and drums. It presents about the same fire hazard as alcohol. It is not soluble in water so that fires in it must be handled like oil fires.

Ether is an extremely volatile, colorless liquid used as an anaesthetic and as a cleaning material. It is very explosive. It is found in hospitals, doctors’ offices, dry cleaning plants and in drug store stocks. It is usually shipped in small metal cans. It is slightly soluble in water.

Dry Cleaners’ Solvents. The various napthas and high test gasolines used by dry cleaners are more volatile and more readily exploded than ordinary gasoline. Fires in these materials must be handled like other gasoline fires.

Deputy State Fire Marshal Louis Strack, of Indiana, died at his home in New Albany, Ind., on August 19, after five weeks’ illness. Mr. Strack was formerly Chief of the New Albany Fire Department. He was 61 years of age.