The detached garage fire has much in common with the auto fire in urban settings. Most often found in alleys, the detached garage presents challenges even though it may not pose the same life hazard as a private or multiple dwelling. Closely spaced, detached garages create exposure challenges for the Engine Company, essentially rendering the garage fire an ″Engine fire.″ Therefore, it is incumbent upon the Engine Company to properly position the apparatus, stretch the appropriate handline, and place this handline to protect exposures and simultaneously extinguish the fire. Conversely, the truck faces related challenges as attempts to gain entry and overhaul can be hampered by fire conditions and structural stability, respectively.

Just as residential and commercial fires have fireground priorities, so too does the detached garage fire. Apparatus placement, physical hazards or obstructions, evaluation of contents and the structure, and overhaul require personnel at the garage fire to operate safely and diligently.

Apparatus placement for the Engine Company at garage fires varies throughout fire departments nationwide. One operational faux pas routinely committed at the garage fire is placing the Engine Company apparatus in the alleyway. Reasons for doing this include: poor hosebed design, over-reliance on preconnected hoselines, and perhaps lucky past practices. Fire Departments must realize the dangers of placing the engine apparatus in the alleyway because engines may become exposure hazards themselves or may operate unknowingly below ominous electrical wires.

Engine Companies should consider placing the apparatus street-side of the address, parallel with the alleyway, with the side or rear hosebed facing the gangway between houses fronting the involved garage(s). This keeps the engine apparatus on the street out of harm’s way and allows for easier, more accessible water supply operations. Rarely do you find hydrants in the alleyway, and reverse lays still place the engine apparatus in the alleyway initially. Engine Companies should design their hosebeds to accommodate alleyway stretches from the street in their response area to err on the side of safety. Preconnected hose lines often don’t afford the lengths needed to make the alleyway. Consider incorporating a static hosebed that affords the engine the ability to stretch a few lengths farther than your preconnected hoselines at such fires. Truck Companies should park behind the engine or place themselves perpendicular to the alleyway if the garage is closer to the end of the block. Placing the truck perpendicular to the alleyway blocks it off from onlookers and cops and allows saws, tools and other equipment to remain close by without obstructing the alleyway or parking under wires.

Wires pose the greatest hazard to operating firefighters initially. Advanced fire conditions are usually found at garage fires due to delays in their discovery and reporting, their incumbent fuel loads, and as a consequence of arson in urban cities. Electrical wires and other service utilities usually placed on poles are often found in alleyways based on the desire for street/address side aesthetics. This is a design principle similar to fire escapes being located on the rear of older multiple dwellings when they were built. This unfortunate reality means that more times than not, wires above the involved garage will be on the ground or atop the garage upon arrival.

The local electrical utility must be notified anytime there is a significant fire in a detached garage to secure the power to the alleyway. Prior to committing personnel or hoselines to the alleyway or back yard of the affronting dwelling, take a minute to gauge the presence and hazards posed by wires. Wires do not necessarily have to be dancing around and emitting their unforgettable ground-contact buzzing sound to kill or injure unsuspecting or naïve Firefighters. Furthermore, snow-covered yards and alleyways create an even greater danger for firefighters not just due to slippery conditions, but their unbelievable ability to hide wires that have fallen, particularly at night. A cursory scan of snow-covered areas with a hand light can often find the telltale dark line in the snow made by the wire. Take a few seconds to trace the dark line in the snow back to the pole to determine the scope of your wire problem(s). Moreover, operating at night requires consideration of lighting up the area or alleyway with flood lights from apparatus or portable lights to operate safely.

Wires are not the only hazard present during garage fires. The contents and fuel load contained within the garage itself poses other hazards. Oftentimes, combustibles that are too hazardous to store inside the home are stored in the garage. This includes gasoline cans, industrial cleaning chemicals, fertilizer and other hazardous materials; vehicles, boats, lawn furniture and other large fire-producing combustibles. This adds up to a fuel load-dense structure ripe for advanced fire conditions. Advanced fire conditions also severely compromise the structural stability of the garage.

Detached garages rarely have rated insulation or interior wall finishings. And many were constructed around the earlier half of last century, so their construction materials’ vintage belie their inherent stability. Overhaul of detached garages should only be undertaken after careful consideration of its relative importance based on several factors: First and foremost, an analysis of damage done to structural members by an advanced fire, regardless of salvageable contents, should be done prior to committing companies inside the garage. The front wall or opening of the garage contains a header over the door that, once compromised or burned away, will make operating inside extremely dangerous. Detached garages routinely demonstrate a weakened state during overhaul by the telltale sign of the structure moving back and forth with every pull of the hook(s). This indicates a structure that is best handled by a well placed stream thoroughly washing down the involved areas of the garage.

Overhaul of involved vehicles parked inside the garage should only be attempted if firefighters are able to safely work under the structure. Standard operations always apply regarding safely operating during auto fires as well. Be aware of hood and hatchback struts, bumpers and airbags. It is easy to be lulled into a false sense of security when the entire garage is involved in fire; however, non-deployed airbags and shock absorbing bumpers can activate at anytime. Salvaging of interior valuables in the vehicle notwithstanding, the vehicle is a goner if the entire garage was involved in fire upon arrival; operate accordingly. 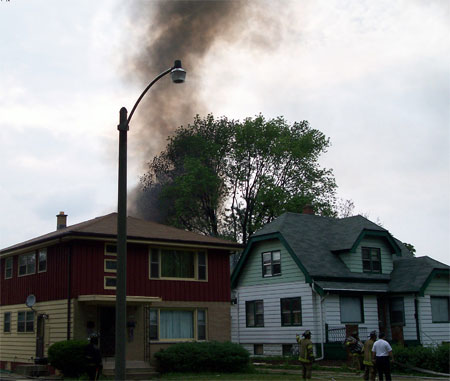 As mentioned above, the greatest challenge for the Engine Company, sans the involved garage’s fire condition upon arrival, are its exposures. Another unfortunate reality similar to the wire problems are the susceptibility of adjacent garages or dwellings to become part of the problem quickly. Wood and aluminum siding is giving way to composite siding, leading to immediate involvement of the rear of the accompanying dwelling. Furthermore, garages opposite the involved one in the alleyway are also susceptible to rapid, radiant fire exposure. This is analogous to having an opposite apartment becoming involved with fire in a public hallway when fleeing occupants leave the original fire apartment door open while escaping.

Well-placed hoselines and operated streams are essential to preventing numerous garages and dwellings from becoming greater alarm fires. Stretching the correct size hoseline is just as paramount when operating at garage fires. Similar to protecting an occupied exposure during a dwelling fire with a 2½″ handline, the same holds true with garages threatening adjacent structures. One well-operated 2½″ handline will make quick work of a garage and surrounding exposures. Several 1¾″ handlines will eventually do the job, but often at the expense of more fire damage occurring to adjacent structures. Immediately apply water to the involved garage and then move the line to wash down the rear of the threatened dwellings. All hands should be placed on the first 2½″ handline during an advanced fire. It is often difficult to gain access through the front or side garage door until an advanced fire has been darkened down a bit; particularly if the wire hazard has not been abated. This means the Truck Company may have a few available hands. Once conditions are more tenable and entry is finally made via cutting the overhead door or forcing the side man-door, take time to wash down any remaining fire and then calculate the odds of safely operating inside. Be sure to check the interior of all exposed dwellings for extension, and always critique your operations as a company afterward.