The United Front program was developed after a large-scale drill was conducted in 2011 at the Muscatatuck Urban Training Center in Butlerville, Indiana, on the readiness of Federal Emergency Management Agency (FEMA) urban search & rescue (US&R) task force teams following an earthquake with a magnitude equal to those of the 1811-1812 New Madrid earthquakes (7.5-7.9 on the Richter Scale). Scientists believe we could be overdue for a large earthquake; the consensus is that such an event would be so catastrophic that it would mark the first time the United States would have to request assistance from other countries. Currently, China and the United States are the only countries that have never requested such assistance after a disaster. Through research and public awareness, we may be able to prevent the loss of life that comes with these disasters.

The initial United Front program was conducted in 2012 in Jerusalem, where a small contingent of Indiana National Guard members traveled to collaborate techniques among US&R teams. To reciprocate, the next drill was initially set to take place in 2013 in Terre Haute, Indiana, on the campus of Indiana State University and would include no local agencies. However, the University delayed tearing down the buildings slated for demolition and moved the exercise to the Indiana University campus in Bloomington. Here, a practical application was implemented for the incident command system (ICS) structures and a large-scale incident, from local authority to state and federal assistance. Initially, this was not part of the drill. However, it became an important part of the learning process; new, unexpected learning opportunities led to high levels of collaboration and application following these exercises. 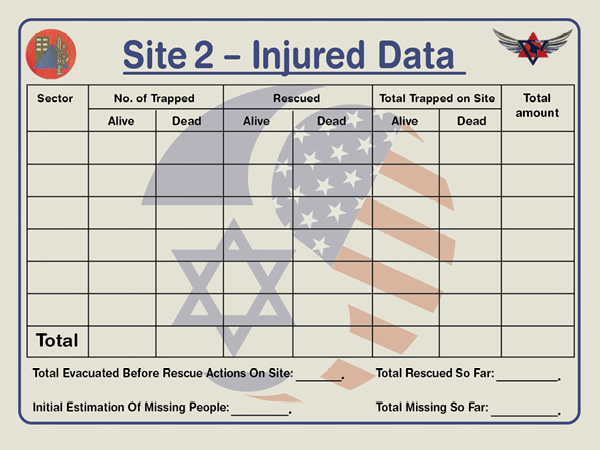 (1) The population behavior officer (PBO) operational worksheet, which is displayed in the command post. This references each site and allows for efficient deployment of assets based on potential rescue. (Photos by author.)

During the 2013 exercise, it was determined that the United States’ ICS did not account for the location and condition of victims. The current ICS is a management-by-objectives system that stops at estimates of potential victims in a collapsed structure. For example, if a building has 200 dormitory rooms with two beds to a room, it is assumed that there are 400 people inside the building; this is a good estimation point. However, the Israel Homefront Command (HFC) has a system in place to locate people inside and outside the structure as well as assist with identifying people as they are rescued. This lack of ability with the current ICS led to Indiana Task Force 1’s (IN-TF1’s) participation at the United Front Exercise in Tel Aviv in 2013. Here, extensive training was received for the position of population behavior officer (PBO), whose assignment is to obtain the information described above.

In 2014, a drill was conducted at the Muscatatuck Urban Training Center that tested the competencies of the PBO. In 2016, I was invited to attend the United Front exercise in Lod, Israel, where the PBO would receive final testing. The funding is used for flights, lodging, and food as well as for the two participating task force teams.

The HFC’s sole responsibility is to select PBOs who have a background in social work, psychology, or some form of behavioral science. There are several reasons for this, but the primary reason is that PBOs will be dealing with civilians and military in stressful, possibly life-changing situations. Most PBOs are reservists (a version of traditional U.S. National Guardsmen) and are assigned to all units, from search and rescue battalions to National Headquarters. For PBOs, an emphasis is placed on the construct of search and rescue battalions and companies; most PBOs are embedded in these units.

The HFC was established for the following reasons:

The HFC’s goal is to ensure the resilience of the Israeli people during armed conflicts, disasters, and emergencies. The HFC does this by providing management, protection, rescue, and relief and by contributing to planning, mitigation, and recovery in emergency situations. Day-to-day responsibilities for emergencies rest on the Israeli National Police; the IDF/HFC can assume responsibility for command and control as needed. The key takeaway is that the Israeli civilian first responder community is not as robust as it is in the United States, so the HFC is involved at the local level, which slightly conflicts with the United States system and the authority having jurisdiction (AHJ). 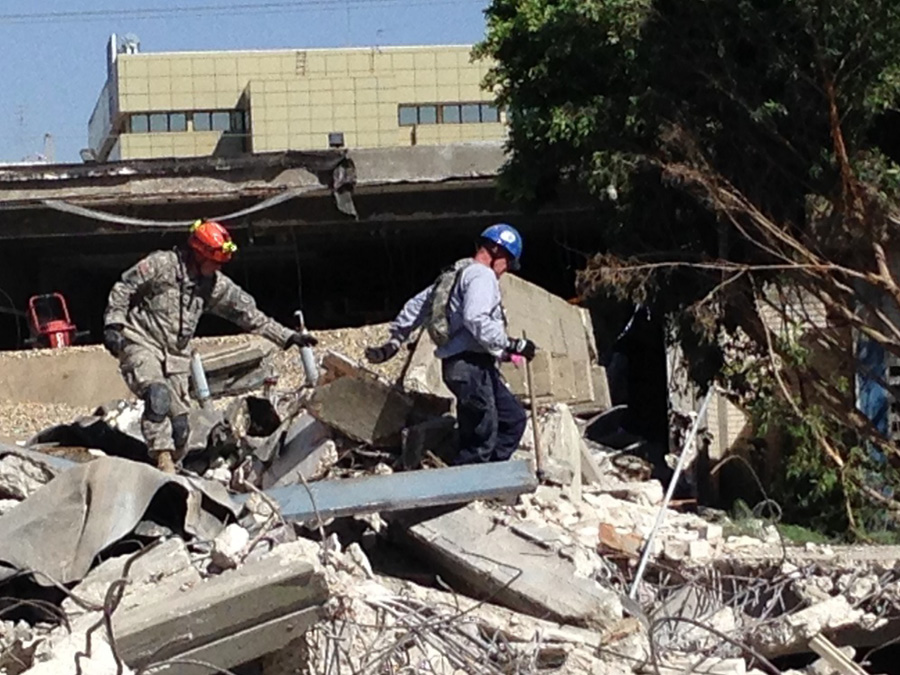 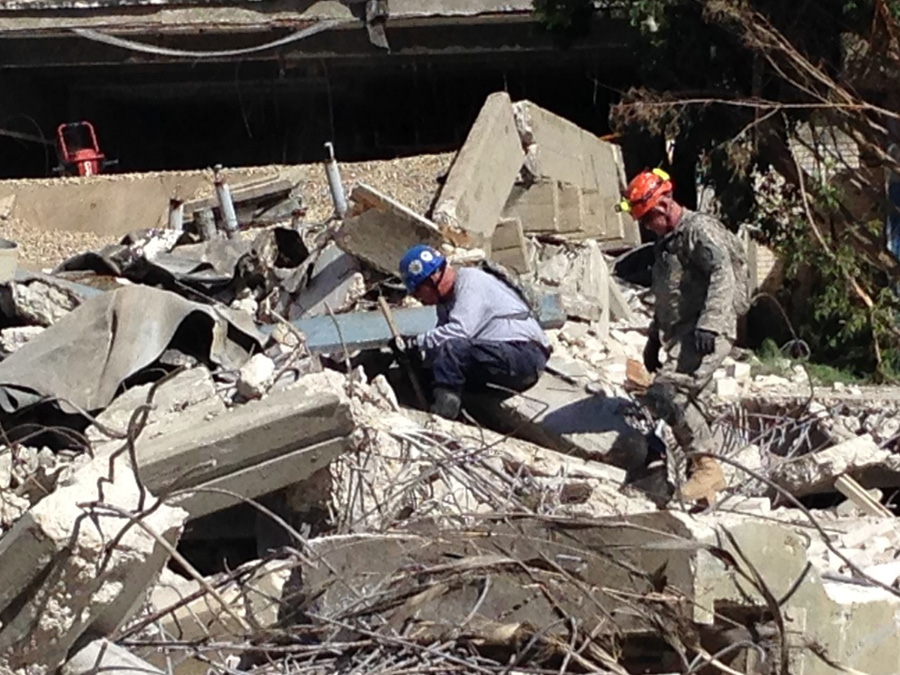 (2, 3) Members of the Indiana National Guard and Indiana Task Force 1 search a collapse area for potential void spaces, applying shared “peel and tunnel” search and extraction techniques. The potential locations of trapped victims were identified from the data collected by the PBO.

To address levels of authority, the Local Authority Liaison Unit (LALU), which consists of a trained PBO and four noncommissioned officers, interacts with the local civilian authorities. The LALU’s mission is to create a population situation report; issue a population assessment; and influence the preparation, coping ability (resilience), and population behavior during emergency situations. The LALU’s PBO is focused on assisting the local authorities by assessing population behavior, advising leadership on the policy guidelines for effectively working with the population, and working to determine resources needed to assist the population. The PBO—and particularly the LALU—are seen as translators between the military and the civilians. The LALU is different from the PBO within the battalions: The LALU is focused on a particular community, whereas the battalion PBO is focused on the population in the area of the emergency.

The LALU is engaged with the local authority during normal operations when helping to prepare the local populace for emergency situations, but it also works with the battalion PBOs to assess the population’s needs in times of disaster/emergency. The LALU focuses on three major “needs”: basic physical needs, information needs, and social needs. The LALU and PBOs analyze the population’s needs, taking into account the following:

After developing the population assessment, the LALU then helps with the development of an intervention plan. The plan’s main focus is to meet the aforementioned needs of the population and get the population back to “normal” as quickly as possible. The differences between Israel and the United States impact the automatic implementation feasibility of the PBO into the ICS. The geographical size of Israel is roughly the same as that of New Jersey, and its population is slightly larger than Indiana’s. The government is “top down”; when national resources arrive, it assumes command. In the United States, the government is “home rule”; although state and federal assets are made available, the AHJ is still in control. 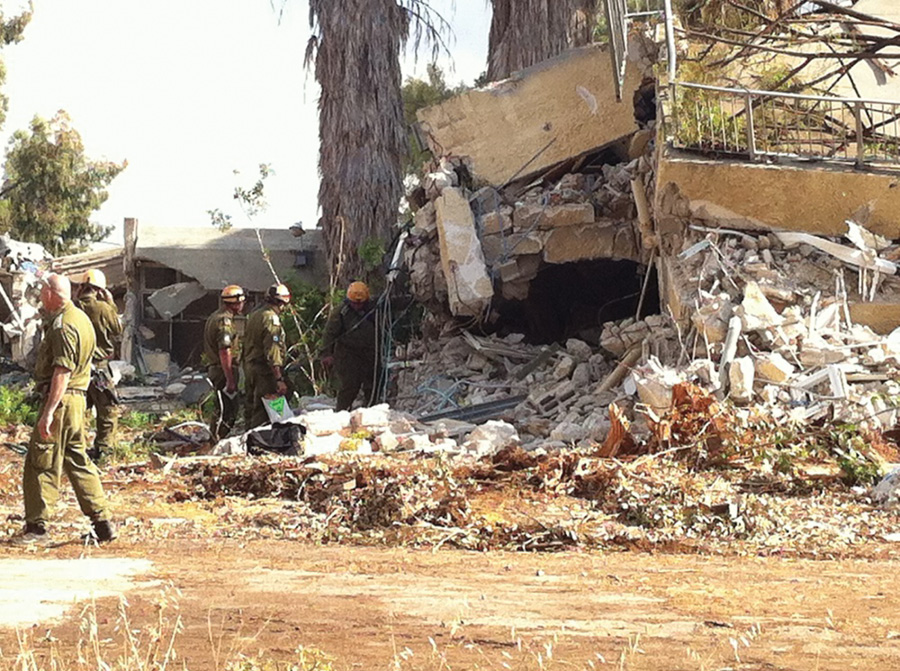 As current operations gather information, the PBO prioritizes gathering even more accurate information so it can affect operations as well as continuity. This has significant application in the first responder community when experiencing emergencies (i.e., floods, forest fires, or extreme snow) so there is some attempt to return to normalcy following a disaster. However, the Israelis have codified it and understand the process and principles that allow a much quicker return to normalcy. The areas of readiness, family centers, call centers, and the LALU are all concepts that exist, but it is unclear who actually controls information flow from all of these areas. 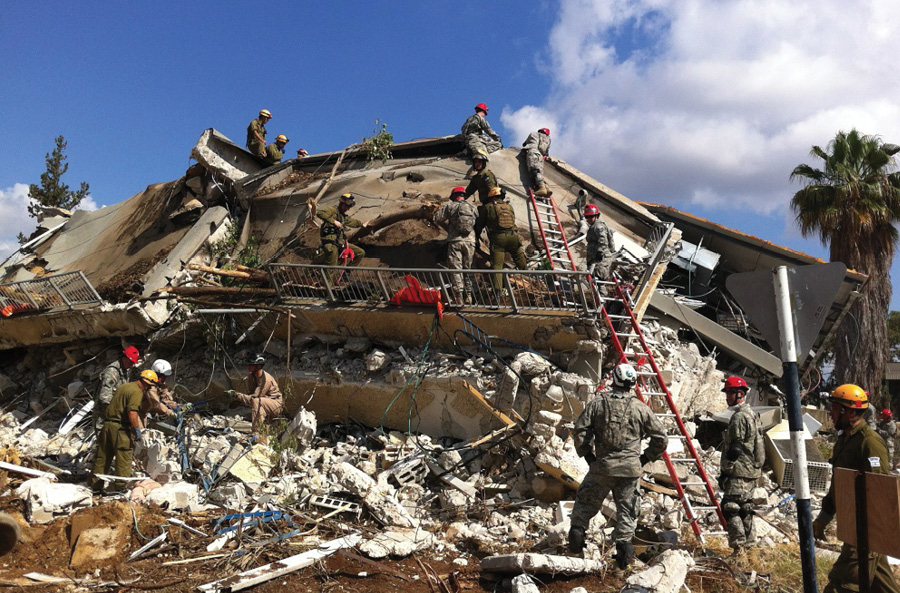 (5) Members of the Israeli NRU; Indiana National Guard; United States Marine Corps Chemical, Biological, Radiological, and Nuclear Defense Team; and Indiana Task Force 1 conduct a search and extraction of a three-story dormitory during an international disaster drill of an earthquake in Lod, Israel.

The PBO focuses his efforts on first responders, particularly search and rescue teams in collapse incidents. For example, the difference between the United States’ ICS and the HFC system’s link analysis when managing objectives can be shown in the following scenario: If a structure collapses and a young victim runs up to rescuers saying his mom is in the collapsed structure, the rescuers respond by saying, “Where was the last place you saw her? We will get your mother out of that pile, but I need you to go somewhere safe while we work.”

These interactions should lead to questions such as, “Where was the last place you saw her?” “What is the carpet color of the room she was in?” and “What type of furniture is in the room?” After a squad or crew is assigned to attempt a rescue, rescuers then must attempt to obtain further information by asking questions such as, “Who else do you know in that collapsed building?” “What apartment was she in?” “Who do you know is NOT here?” “Did you see anyone rescued or self-rescue and then leave?” These little details will make a big difference when it comes to saving lives. Asking these questions gives survivors an active role in the rescue and increases the efficiency of fixed and focused search and rescue efforts.

My department has started to adopt some of these techniques from soldiers who deploy to and then return from Afghanistan. However, responders at an earthquake, a massive explosion, or a tornado may see things as potentially worse than what they experienced on the battlefield because these disasters now affect friends, neighbors, and possibly their families. Resiliency training is a must for any course being developed. 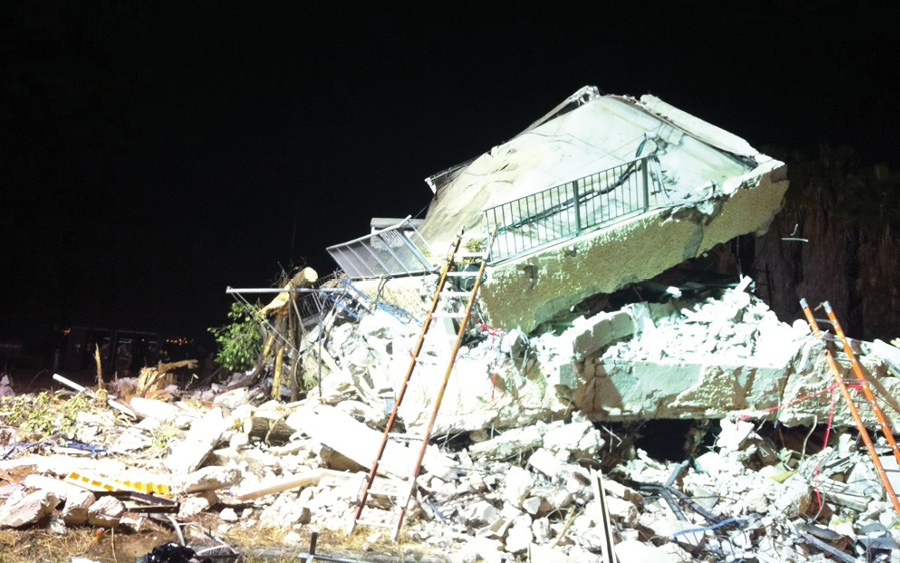 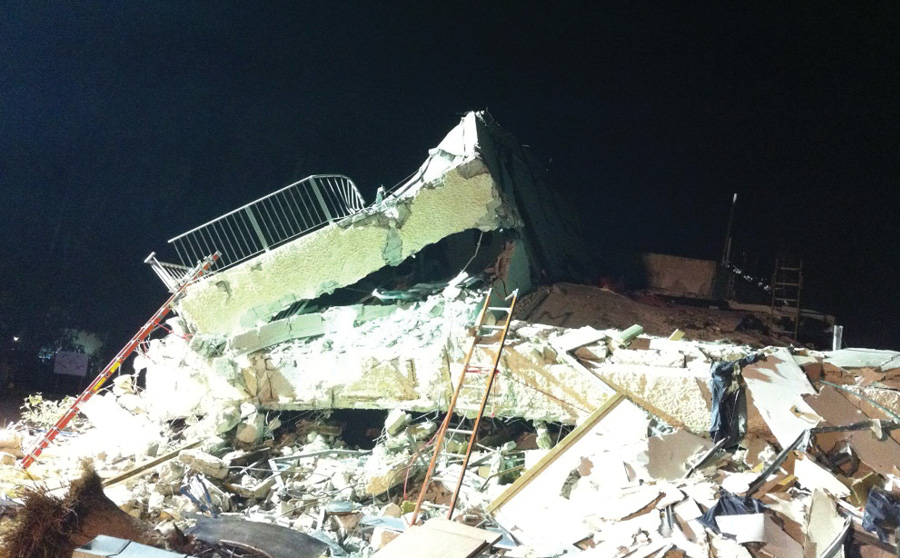 (6, 7) Night operations of a search and extraction during a late-night briefing.

The PBO fits best into the ICS system as a general staff position. This “identification chief” would be responsible for obtaining information about the population, the locations of family centers and shelters, and the well-being of first responders. The identification chief will gather information from all available resources using techniques that we tend to overlook.

We set up call centers, but who controls the questions and monitors the incoming information? We establish shelters, but who monitors from where all the individuals are coming? If, geographically, there is an area/neighborhood/community unaccounted for, is that group okay or are they unable to seek assistance? First responders interviewing witnesses can provide a vast amount of information including the last location a victim was seen or simply lead responders to ask a civilian, “Why are you digging there?”

The key to this position is not just information; it is also analysis of that information and its comparison to other information as it flows in from all available sources. This provides a greater chance of successful rescues, which assist in the return to normalcy that all communities wish to achieve after a disastrous event.

STEPHEN COOVER is a technical information specialist with Indiana Task Force 1 and a captain in the Bloomington (IN) Fire Department. He is a graduate of Indiana University and of the Executive Fire Officer Program.