ON March 6, 1891, the fire department of Indianapolis was reorganized under the terms of the new city charter on a non-partisan basis, and the fire and police forces were placed under the same management—that of the department of public safety. The political element was equalized and thirteen firemen were dismissed so as to keep the balance even between the Republican and Democratic parties. The rule is now to fill all vacancies from the same parties politically as that from which the vacancy occurred. The second annual report of the board ol public safety showed great improvements in the fire department in the direction of increased efficiency combined with a more economical adminisrtation. The pay roll for the year amounted to $92,152.29 for 123 men. whose field of operations lay over a very large extent of territory. Even now the whole fire fighting force of the city (whose population is about 106,000 and within whose fire area are many factories, business houses, churches, schools, and handsome residences, besides a large number of frame buildings) amounts only to 145 men, of whom seventy-three, including the chief, are Democrats and seventy-two Republicans. Their equipment consists of eight engines in service— two extra first-class engines having been purchased during the past year, with another extra engine now being constructed; three hook and ladder trucks and one aerial truck; three chemical engines; twenty-six chemical extinguishers; thirteen hose wagons, one hose reel, and 22,650 feet of serviceable hose (besides 2,000 feet second rate not reliable), eighteen wagons in service—one four-wheeled reel in resetve; and a C hampion water tower. There are 182 Gamewell fire alarm signal boxes in service, besides the watch tower, from which the men gave 140 alarms during the year, many of them for fires in dangerous locations, where a little delay would have resulted in bad fires. During the past year two additional hose companies and an engine company have been put in service; four new engine houses and a hose house have been built. I here are 166 cisterns, ranging from 700 to 2,000 barrels capacity many of thqm connected with the water mains—-as ( Irn-f Barrett hopes all will soon be. In addition to the regular ap propriation for the maintenance of the fire force a special appropriation of over $30,000 was asked during last year to establish, equip, and man the new engine houses. There are still a few sections of the city without the best fire protection; these, however, will be looked after during the present year. The number of alarms during 1896 was 571; loss, $337,974.04; insurance. $1,340,060. The water works system is so efficient as to be of immense assistance to the fire department. At all times, when called upon, sufficient water has been furnished, and the fire pressure is never less ihan 100 pounds in the centre of the city. The steam fire engines are not called upon to throw a stream at more than one fire in twenty to which the department is called; the hydrants being relied upon to supply power and water. The total expense of running the city’s fire department last year, exclusive of the $30,000 appropriation mentioned above, was $165,613.89. During the year Chief Webster was retired from the service and First Assistant Chief Barrett was appointed in his stead, with Edward Coots and Gustav Evarts, both men trained in the department,as his assistants.

The department has more than once been called upon to fight fires in which much valuable property was at stake. At some of these fires unfortunately valuable lives were also lost. As has been already related, Chief Glazier met his death (the first accident in the history of the fire department of the city attended with fatal consequences to a fireman in the discharge ot his duty) on March 11, 1873. by’the falling of a wall.

Seventeen years later anti on the sevent enth day of the same month occurred the Bowen-Merrill tire—the crowning disaster to the establishment, where the km was $200,000, twelve firemen were kilted, and sixteen, including the present chief, Thomas Barrett, seriously and dangerously injured by the collapse of the roof of the building. Of these one died from his hurts and several were ever afterwards incapacitated from doing heavy duty. This horror stirred up a generous sympathy for the surviving relatives of the dead firemen. Subscriptions poured in from all quarters—from London and elsewhere in England—and of the sum thus contributed,amounting to $52,433.49. the greater part was used to purchase annuities for the widows and orphans of those who were killed. Another fire, accompanied with greater loss of life, and more terrible in its horrors, because of the helplessness of the victims, was the burning of the Surgical institute, which was filled with helpless cripples, many of whose lives were saved by the firemen at great risk to themselves. As it was, nineteen of the inmates perished.

That was but one typical instance illustrating the bravery of the Indianapolis fire department, whose morale stands on the highest plane, whose members are all in earnest in their duty, obedient to their chief and officers, and loyal to each other So faithful are they in their service and so efficient in their work that it may well be questioned whether any other city in the United States can boast as good a department for so small an outlay; and here may be quoted the report of the board of public safety which claims that “ more improvement has been made in the fire force during the pa=t year than in any previous year in its history.’ 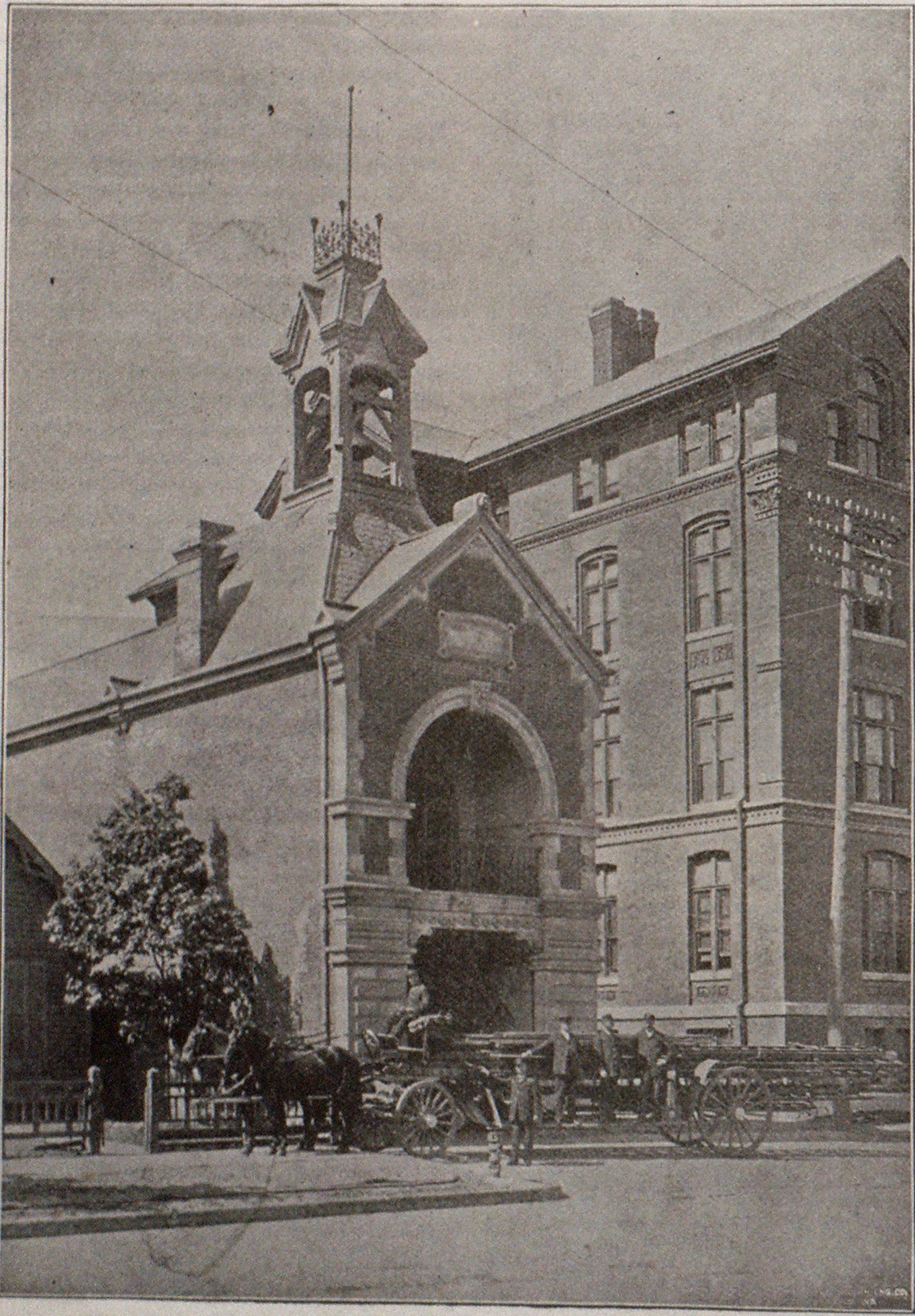 IT was not till March 31, 1860, that the paid fire department of Indianapolis had a steam fire engine—a Lee & Larned rotary—which was stationed in what is now No. 6 house on West Washington street. In the following August a third-class Latta engine from Cincinnati was purchased and located in what is now headquarters—then the Marion engine house—it was retired in 1876, to the great regret of the firemen. Two months afterwards a Seneca Falls, N. Y. engine was added to the number; and thus Indianapolis, though a small city, was one of the first places in the world to have modern fire fighting machinery. In 1867 a second Seneca Falls engine was purchased, and in 1869 the fire department consisted of three steam fire engines in actual service, five hose reels, one chief fire engineer, three engineers, one superintendent of telephone, one hook and ladderman,three firemen, six drivers, twelve horsemen,fourteen horses, and two watchmen on the tower, with only forty-five signal stations and numbers, and seventy-eight cisterns.

The tower above mentioned was byilt by the city council in 1863 on the three story building then known as the Glenn block. In it was placed a watchman, whose duty it was to be always on the lookout for fires and turn in an alarm by means of machinery connecting with a bell which hung in an open frame work immediarely in the rear of the Glenn block. The city was then divided into nine thinly populated wards, and up to 1868 the location of a fire was vaguely designated by the watchman in the tower striking the number only of the ward, leaving the firemen to find out for themselves the exact location of the fire—a work of no small difficulty, the size of the ward entailing on the department no little wandering about—and, consequently, great loss of time ensued. The city continued to use only three steam fire engines till after 1873, when three new engines were bought. In that year also the present fire headquarters were completed, and in that year likewise occurred the death of Chief Glazier by the fall of a wall while on duty at the burning of the wheel works at the corner of South Illinois and Garden streets, after serving as chief for two years and ten months. lie was the first fireman of Indianapolis to be killed on duty, nor did any other fatal accident take place till March 17,1890,when twelve firemen were killed and several badly hurt when the BowenMerrill building collapsed.

It was in this year that the scheme to supply Indianapolis with water for fire protection purposes assumed a tangible shape. It had first been mooted in 18G0 by a Mr. Bell of Rochester, N. Y.; but the uncertainties due to the impending Civil war prevented any decisive step being taken in that direction. In 1864 the Central Canal Company made overtures to the city, looking that way; but these also came to nothing. In 1865 Mayor Caven proposed the building of a reservoir on Crown Hill; but nothing was done; till November, 1866, when a charter for a water supply was granted to R. B. Catherwood & Co., who laid a few feet of pipe on Main street, and then, finding their project was not likely to be a paying one, abandoned their work. Things remained in this condition till the fall of 1869, when the matter was again revived, and the city council in January, 1S70, granted a charter to the Water Company of Indianapolis to supply the city with water. I he Holly system was to be adopted and before 1871 fifteen miles of pipe were to be laid, the cisterns kept filled and the necessary quantity of water under sufficient pressure to extinguish tires to be always on hand. The president of this company was James O. Woodruff; the secretary, Alex.C. Jameson; and the treasurer, William Henderson, The fifteen miles of pipes were duly laid; the area supplied being one mile square— with 200 hydrants—at a cost of about $350,000.

In 1874 the firemen, who had previously been ununiformed, except in so far as they wore leather hats to distinguish them from the crowd at fires and for protection’s sake, adopted a uniform similar to that worn today. In the meantime chief engineers came and went at the will of politicians up to 1891, when Chief Webster, under a popular demand untainted by partisanship was again elected,and in March of the same year, after the passage by the legislature of the new city charter, was confirmed in his office by the department of public safety. In 1874 the great fire which burned the Talbott block at the

Saturday, north west corner of Pennsylvania and Market streets, the Vajen Exchange block, the Wright block adjoining on the north, and the Sheets’ building (now the Denison house), opposite on the East side of Pennsylvania street, and, turning southwards, badly damaged the Martindale block, causing a loss of over $200,000. was the means of forcing the city to buy three new engines and better supplies of hose. The engines were of the Seneca Falls rotary, Lee Lamed rotary, and the Latta type,giving the city six serviceable and efficient fire engines—a better equipment (it is claimed) in proportion to population and area covered than the department has today. from 1878 records of alarms began to be kept (under Chief Pendergast), together with the usual statistics found nowadays in the report of every properly regulated fire department.