One of the most novel exhibits seen at the great World’s Fair was that shown by the New York Belting and Packing Company, Limited, 13 Park row, New York city. Their digplay, including the booth, was composed entirely of rubber. The effect produced was artistic in the extreme, and claimed the attention of visitors at once. Everything was rubber—vulcanized rubber—for this concern has the credit of being the oldest and largest manufacturers of such goods in the world. The railings were made of rubber, the entrances and gates constructed of suction and air-brake hose, and the lower part of the railings latticed with bicycle pedals. The uprights noticed in engraving, one at either end of booth, were built up of suction hose, coupled together and crowned by the stars and stripes, supported by rubber poles, each surmounted by a rubber ball.

The display of curios within the rubber structure was extensive and instructive. Among them were rubber shoes made by the natives of Brazil, from which country the company gets its supply of rubber ; photographs showing the natives at work gathering and curing rubber, etc.; also rubber playthings fashioned by them for their children. An immense Para rubber bottle weighing 600 pounds stood in the centre of the booth and attracted unusual interest. There was also a section of an immense rubber belt (this concern has become noted for its large rubber belts), pneumatic sulky and bicycle tires of improved manufacture, among which the famous “ BurrisMichelin” and “ Whippet” tires were prominently displayed, footballs, rubber bottles, vulcanite emery wh’els, many samples of steam, fire and air-brake hose and other rubber articles made for mechanical and household purposes. The visitor stepped upon one of the company’s celebrated perforated rubber mats if he entered the booth to inspect these many interesting exhibits, passing beneath an arched entrance ingeniously constructed of several sections of suction hose coupled together, from the rubber keystone of which he had received a true American invitation in the terse inscription thereon which read : “ Walk in.” Notwithstanding the largeness of the booth, one wonders how the company managed to show off the many goods to such excellent advantage without placing some of the articles out of sight. The exhibit was one of the most striking in Machinery hall, and showed the expenditure of an immense amount of time and attention and no inconsiderable display of ingenuity in its design and construction. The engraving gives a very truthful reproduction of its appearance. 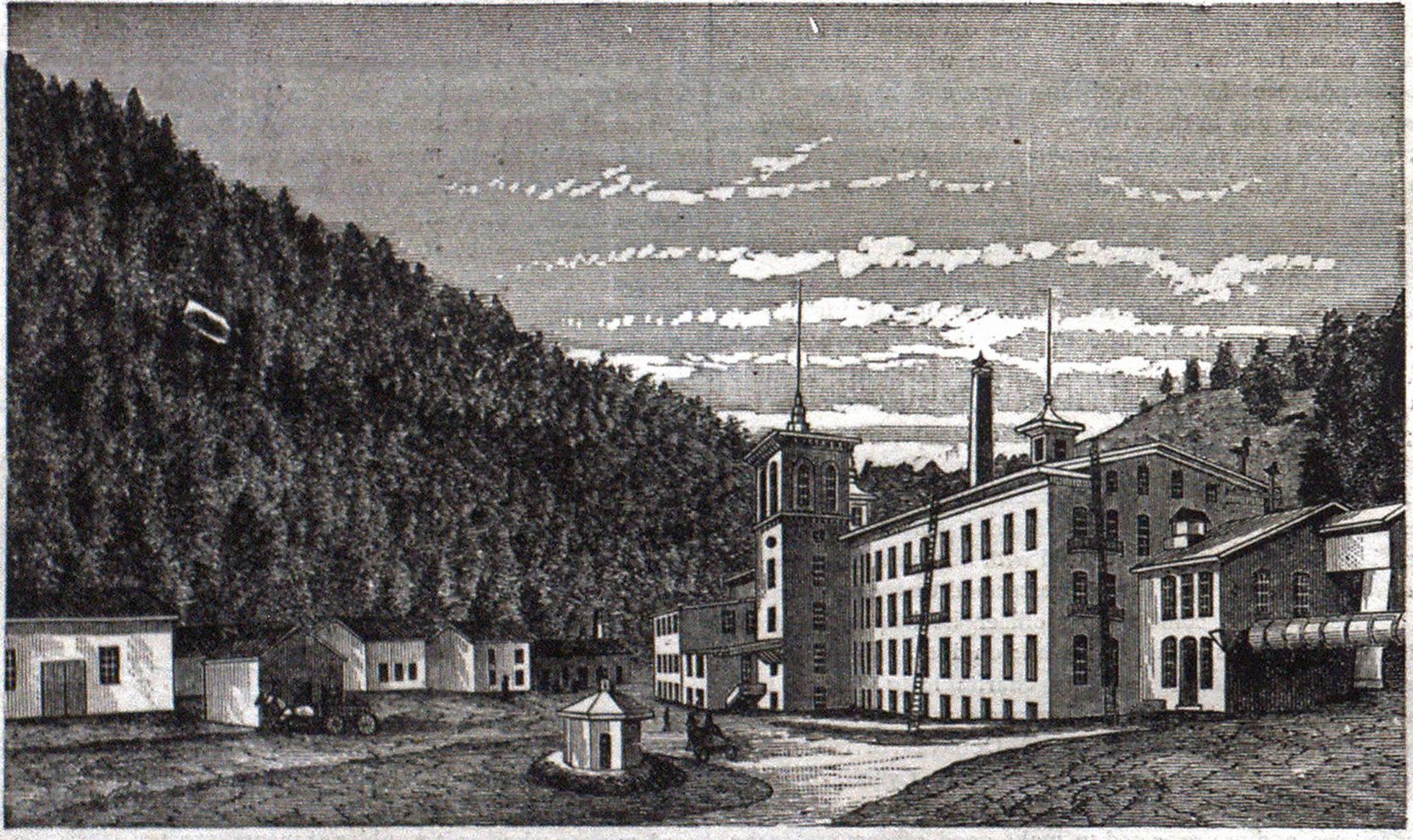 NONE of the various industries of our country have attracted more attention of late years than those in which India rubber, in one form or another, is used. It has been adapted to an almost infinite variety of purposes, and enormous quantities are now being used in the manufacture of Fire Engine hose, machine belting, packing, etc. It may not be unprofitable for our readers to give some attention to the subject, to the end that those jvho use rubber goods may be able to discriminate more closely in their purchases. It is well to learn how to avoid such products as are of imperfect manufacture, or those made with the adulterating compound so often introduced in low-priced articles, which invariably prove the most expensive in the end and frequently cause great loss from breaking down at a critical moment, as instance the bursting of hose at fires, a source of endless annoyance and damage.

Among the many manufacturers, the New York Belting & Packing Company rank as the oldest and largest firm of makers of rubber fabrics especially adapted to mechanical purposes in the United States. The engraving represents a portion of this company’s works located at Newtown, Conn., which, together with Factory No. 2 and other buildings, cover several acres of ground, and give employment to over three hundred hands, the monthly pay-roll averaging $12,000. They have been over thirty years in the business, and the success which has attended their labors and their enviable reputation for the best goods in the trade is mainly due to the energy and perseverance of Mr. John H. Cheever, who, as treasurer, has conducted the financial affairs of the company during all these long years, and by his tact in selecting his managers has surrounded himself with an able staff, who know what is best, and knowing, perform. Their works are the most complete of the kind in existence, being fitted with every modern improvement in the way of machinery especially adapted for their manufactures, and tons upon tons of crude rubber and cotton duck are yearly consumed in producing their specialties. When we say that in belting alone of the different widths more than 2,500,000 feet or 500 miles was made by them last year, some idea of the extent of their business can be formed. Lack of space forbids a detailed description of the variety of steam-packing gaskets, valves, car springs, matting, emery wheels, garden hose, hydrant hose, suction hose, etc., produced by them.

As our readers are more particularly interested in Fire Engine Hose, we will endeavor to give them a brief description of its method of manufacture by this company. It is almost needless to enumerate the special qualities which make Rubber Hose superior to leather, or other material for fire purposes in many instances ; its flexibility in any degree of cold, when properly compounded, its durability under neglect and want of care, its wear under the roughest of usage, are a few of the advantages which make it preferred by many consumers.

Made by the Belting Co. under their special patents, is particularly adapted to these purposes, and the Service record of this Hose, as shown in over 300 Fire Departments in the principal cities since the year 1868, seems to warrant an excusable degree of egotism when they claim it to be the best Steam Fire Engine Hose in the market. A heavy Cotton Duck woven expressly for this purpose so as to give the greatest tensile strength, is first prepared in a bath of Carbolic Air Vapor at a temperature of over 300 degrees of heat, which is the only process by which the fungi or decomposing matter of the cotton is effectually destroyed. This renders it anti-septic or mildew proof.

This Company hold the sole patents for this method.

The Duck is then thoroughly impregnated with Rubber in a calendering machine as the foundation for the Hose. Fine Para Rubber, being the strongest and best quality known, is rolled into sheets of the desired thickness and spread on a smooth iron mandrel or cylinder to make the inner lining. The prepared Duck having been cut into long strips of the required lengths and widths, is then wrapped diagonally around the mandrel as many times as requisite to make the different plies. The outer coating of rubber similar to the lining, but prepared with especial reference to wearing qualities, is then spread on the Duck, the rubber being in such a condition that the frefhly cut edges being pressed together unite firmly and hold with great tenacity, making the joints of equal strength with the other portions. The mandrel is then revolved against a heated iron cylinder which renders firm and compact the entire section of fabric which has been fitted around it. After the subsequent Vulcanizing process has been completed, this mandrel or forming cylinder is removed by a neat invention, the coating of Soapstone with which it had been first prepared preventing the rubber from sticking to it and causing it to slip easily.

Suction Hose is made over brass or galvanized iron wire. Sometimes the latter is imbedded in Rubber so that only a smooth surface is presented inside and outside. This is effected by making the different layers successively, and then as in the other kinds of Hose subjecting each to a powerful pressure by heated rollers before vulcanizing. By this method leading Hose is manufactured which will stand a pressure of over 400 lb. to the square inch without bursting.

Fabric Hose has lately come into great prominence for fire purposes, and this branch is under the supervision of Mr. Henry F. Herkner, who having been connected with the manufacture of jhis style of Hose since 1858, is deservedly the veteran of this tine. He is one of the Patentees of the Celebrated CABLE COTTON HOSE, which is now so extensively used.

Is woven on an ingeniously constructed circular loom, producing a fabric in which the several plies of warp and weft are so firmly united that it has won for itself a reputation unequalled for enduring great pressure and long severe service. One prominent feature in this Hose is that it has a heavy ribbed jacket or extra cover woven on the outside to protect it from wear. The patent for this method is solely used on this Hose. After the woven fabric, which is made of the best Gulf cotton only, is rendered antiseptic or mildew proof, a heavy Para rubber

lining is firmly imbedded in it, the ridges running lengthwise with the stream, giving greater

distance to the stream by avoiding friction.

tainly have great merit, being mainly intended, however, for fire hose in mills and factories. THE JOURNAL alluded a few weeks ago to the exhibit of this Company at the American Institute Fair,

now about closing. In variety and quality it has never been surpassed, and they are deservedly enti-

tled to the several first premiums that have been awarded to them for excellence and superiority.