In this issue is brought to an end the series of articles that have appeared in FIRE AND WATER since November 21, 1896, illustrative of the many improvements that might be made in hydrants and other water appliances, so far as they corcern fire protection in New York city.

Commissioner Collis, of the public works department is determined to introduce more modern methods in the water distribution of this city, and accordingly made an arrangement for the test of such appliances in the corporation yard at Twenty-fourth street and the East River. The exhibition opened on Tuesday, November 17. the eminently satisfactory arrangements in the yard being under the direction of Col. Clear, superintendent. Quite a large number of exhibits were in evidence, and the tests to which they were subjected were in every way thorough; the committee of judges being Chief George W. llirdsall, of the aqueduct commission, Engineer Horace Loomis, in charge of sewers, Water Purveyor North, Chief Bonner, of the fire department, and Col. Clear. Most of the manufacturers interested in the production of such appliances sent in exhibits, and the readers of FIRF. AND WATF.R had the benefitof full descriptions of them,accompanied by il’ustrations (the cuts being specially made or procured for the occasion). These illustrations appealed objectively to the understanding, and served to make the descriptive matter clearer. The great progress that has been made in such appliances was thus shown to the world, while portraits of the representative men concerned directly or indirectly in their manufacture and sate were given in these columns—another series appearing in this week’s issue.

The result of the exhibition must infallibly be the removal of the inefficient and obsolete type of fire hydrants, etc .which has so long been suffered to handicap the efforts of the fire department in this city to extinguish fires as quickly and with as little destruction to property as possible, and the substitu tion therefor of a new type that shall be in every way effective and up to-date. The result of the endeavors of FIRE AND WATER to keep its readers posted in the best type of such appliances has been to let in a flood of light upon a subject on which considerable ignorance existed in the minds of the multitude, and to enlighten the people in general as to the immense strides that have been made in that direction during the last few years. 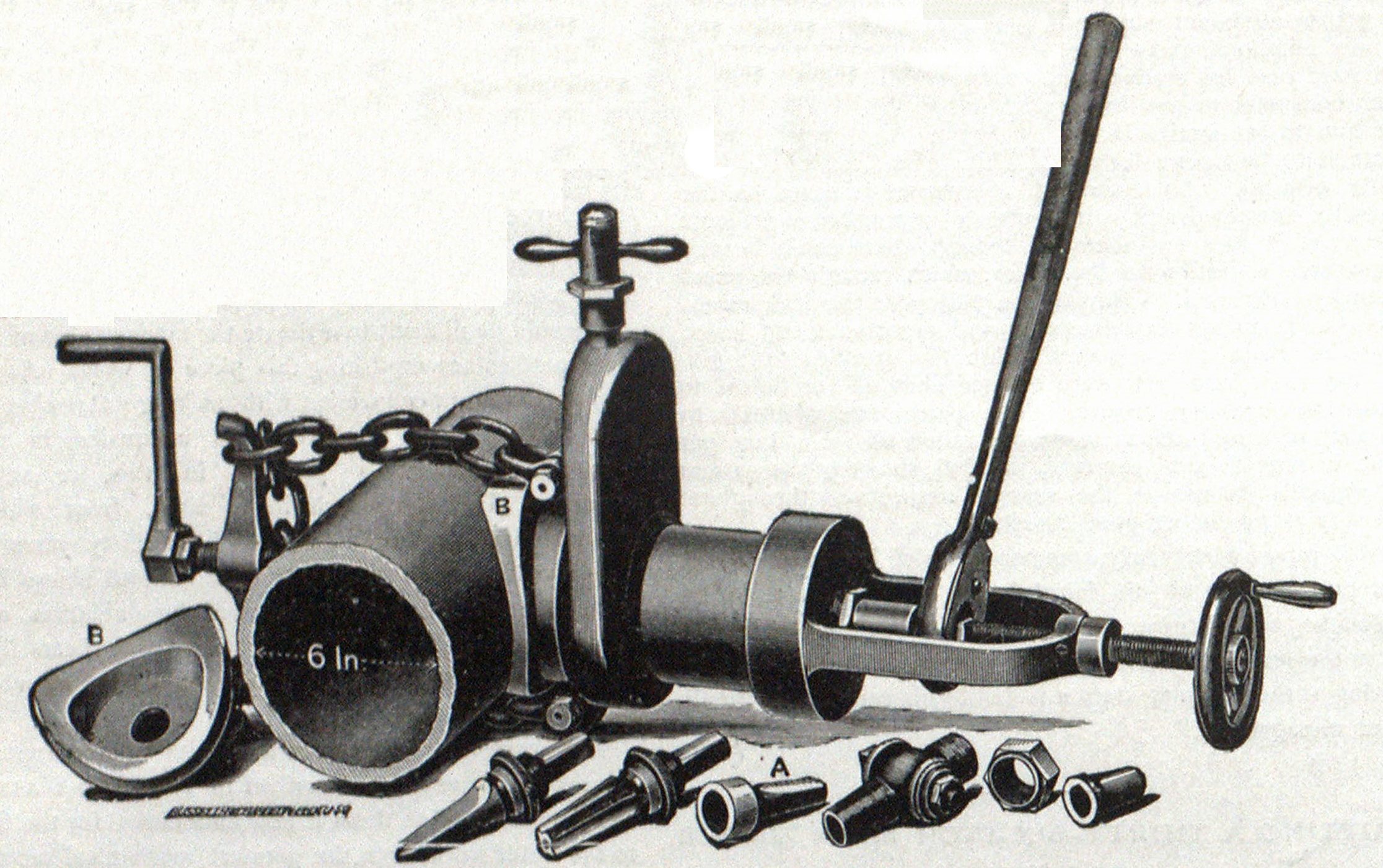 MR. Charles Carr, of 7 Exchange place, Boston, Mass., exhibited the E. R. Jones tapping machine in the corporation yard. This machine is manufactured by Mr. Carr, and is intended to be used for inserting corporation cocks from the smallest sizes to one and one-half inches in diameter into water mains while they are under pressure. The machines are made of composition to insure lightness, and are finished that they may be kept properly cleaned. The trimmings are of steel and chains of Norway iron for strength, and every part is accessible. In durability and facility of operation they are unsurpassed.

Stops, with this machine, can be inserted on the top or sides of a pipe and.unlike most tapping machines, it has a gate controling the water at all times during the process of tapping. This enables a drill, tap, or stop to be taken out and replaced by another, even after the hole in the pipe has been drilled or tapped, while the water pressure is on. Combination taps or separate drills and taps may be ured.

The machine is very simple, is taken ajvtrt and put together instantly and without bolts. As the interior is open to view, it can be recentered over any stop which may be in the main, and that stop can be taken out, its hole redrilled and tapped, and a larger stop inserted in the old place, or a stop can be taken out and a plug inserted in its place. Nothing in the line of inserting corporation cocks, or taking them out, or plugging but what can be done with facility by the machine, for the reason that all of its operations are in plain sight and performed in a manner that is customary for men to operate in drilling and tapping.

While it has ample strength, it is sufficiently light, when the two parts are locked together, to be readily handled by one man in a trench. It is customary, however, to handle each part separately, and this is always the case when the machine is being attached to the pipe, as the locking together is the work of but a moment.

The machines are designed for any pressure and their use under one-hundred and twenty-five pounds is very common.

Mr. Carr claims that this is the pioneer tapping machine and in use from Maine to California. Any information desired about them can be obtained of the manufacturer above-named.

This pipe cutting machine is now in use in a large number of water works throughout the country, and for it are claimed the qualities of safety, speed, and economy. It will cut a twenty-four-inch main of the usual thickness in less than twenty-five minutes,and by employing it is avoided the danger of fracturing the pipe by using chisel and hammer. It can easily be operated by two men and as easily adjusted to any position. This French pipe cutting machine is sold by Benjamin C. Smith, 275 Pearl s.reet, New York.

As showing how foolish the writers for some secular papers sometimes become when they ask questions about matters of which they have little or no knowledge, the following utterances of the Savannah, Ga., News may be quoted: “ Has there been an inspection of premises by the water works authorities since the freeze, to see whether or not water is being allowed to run to waste? It is a probability that a little investigation would show broken pipes through which hundreds, if not thousands of gallons of water in the aggregate are running every dav.” To which the Pensacola, Fla., Daily News replies: “That may be true of Savannah, but of Pensacola it is true only where a meter marks the leakage.”