The Quinsee service or stop-cock box for water or gas—an illustration of which will be seen elsewhere in the advertising columns of this impression—has come to the front, with every intention of staying there. Its sales have been large and very gratifying to the manufacturers—the Modern Iron Works, of Quincy, Ill. The device, which has been patented, costs only a very little more than the least expensive box on the market a::d is, in reality, at least as cheap, since it has neither lid nor cover to lose, its top being unbreakable. While lighter than any other servicebox made, it is stronger in construction, and can he used with any kind or make of stop-cock by simply changing the rod-receiver. It is equiped with a combination shut-off and key, and a rectangular hole in the casting admits the shut-off key of the same shape. There are, also, two level holes in the bottom, which admit of dirt, etc., being ejected with the same key that is used as a shut-off. The combination shut-off rod and key are furnished for use where two or more styles of service-box are used. This box has so many v>ood points that, when once in service, it will he a matter of wonderment why it is not universally used. It may he jdded that these boxes, if not found satisfactory, may be sent back at the expense of the company.

Granit‘ville. Forge Village, and Westford Centre, Mass., will be supplied with water this summer by the Westford Water company.

During this year the Marion. Ohio, City Water company will make three miles of extensions, at a cost of $22,000. Claiming that it could not borrow money under the present franchise and that a new franchise was necessary before it could make these extensions, the company asked the council for a twe”tv-five-year extension of the present franchise. The council refused to grant the request, hut told the company to go ahead and make the improvement. 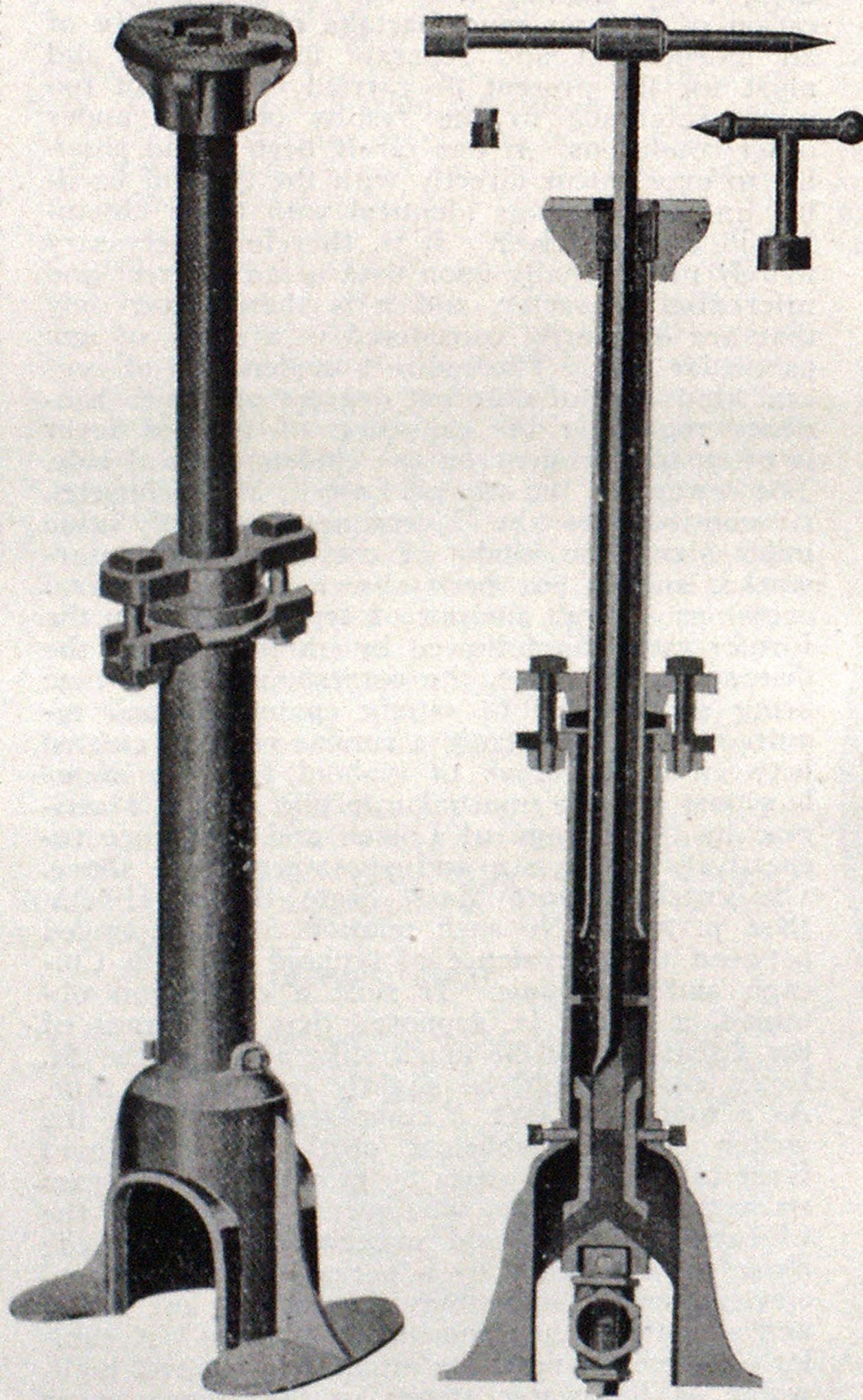 The Quin-See service or stop-cock box for water or gas is an invention which will be found invaluable by all users of water and gas. It is a new departure in service boxes, and has been constructed with a view to overcoming at little cost the objectionable features of other styles of service boxes. Among its distinctive features are the following: It has an unbreakable top, in consequence of which the box will never be found open and filled with dirt. It can be extended to the surface-line, without digging, and the liottotn section cannot shift front the stopcock Its employment also guarantees the possibility of always being able to shut off or turn oil the supply of water. Another great recommendation is that its price is very low. The opening at the top is large enough to admit a rod of any size up to ⅝-in.—sufficient to turn the largest stop-cock. Tire box adjusts through a slip-joint and is held by a rubber packing, as tight or as loose as may he desired. The top can be removed and an extension of any length put on at the surface line, the upper secton being of 1-in. wrought iron pipe. The top section cannot be pulled out of the lower, nor is it possible to force the top section down through the lower in such a way as to injure the stopcock. Another advantage is that the box can lie used with any size or make of stop-cock by simply changing the rod-receiver anti the rodkey can be so made as to lie interchangeable with any box on the market, or a combination key can IKmade to be used either in the Quin-Sec or any other style of service-box. The rod-receiver is a special casting and is supplied to the lower section, which is of cast-iron. The rodreceiver is attached to the head of the stop-cock, with the upper end extending about 3-in. into the box. A rectangular hole in the centre of the casting admits the shut-off key of the same shape. This rod-receiver has a flaring top, which guides the shut-off key fhto the rectangular hole and centres it in the box. Two set screws hold t loosely in place, in such a way that it not only has a adjustment, hut it can he tilted to one side, without hurting the stop-cock or its connections. There are likewise two level holes in the bottom, which admit of dirt, etc., being ejected with the same key that is used as a shut-off. The lower section, while lighter th in other service-boxes (and, therefore, costing less for freight), is strong enough to withstand any strain put upon it. A permanent rod can be supplied. which extends up into the box to within eighteen inches of the top. The combination shut-off rod and key is furnished for use where two or more styles of service-boxes are used, one end of the rod being rectangular in shape for the Quin-See box, while the other is fitted with the ordinary clamp required for the Peerless or Buffalo box, which is also made by the Modern Iron Works of Quincy, 111., the manufacturers of the Quin-See box. This Peerless box is made in three patterns—the Long Regular —a 24-in.; the Short Regular—12-in.; and the Large Minneapolis—a 24-in. adjustment. The first two have iLj-in. extension pipe; the last has one of 2-in. This box can be set in a trench full or partly full of water. It is specially adapted for use in sandy soil, particularly quicksand, and is guaranteed to be practically mud. sand and watertight. It hts the threads of any pattern of the Minneapolis curb-cock. The manufacturers, on application, will send catalogues or will ship samples on 30-days’ trial. If not found satisfactory the boxes may be sent hack at the expense of the company.