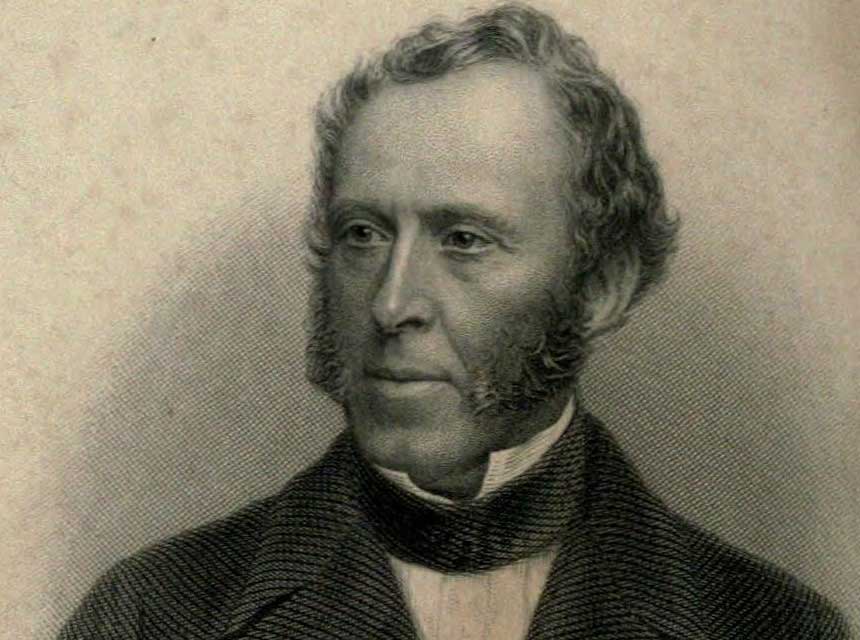 When American firefighters think about our history, we think about Benjamin Franklin. Many of us learn about Franklin in the academy. We learn about his formation of the Union Fire Company, the first fire department in Philadelphia. If it isn’t Franklin we think of when we talk about our history, it’s the Gangs of New York. We think of bands of mid-19th century volunteer firefighters brawling in front of burning buildings. We may even look back to early colonial American bucket brigades or Peter Stuyvesant’s regulations of roofing materials. These aspects of our history are important. But the American fire service also owes a great debt to a Scotchman who is virtually unheard of in this country.

James Braidwood was born in Edinburgh in 1800, the tenth child of Janet Mitchell and Francis James Braidwood. Francis Braidwood was a builder and upholsterer, and as a teenager James apprenticed in the family business. Francis thought that there wasn’t much of a future in the upholstery business, and he encouraged James to train as a building surveyor. As a young man, he began to develop a good reputation in Edinburgh. He had been a good student at the elite Royal High School. He was known to write well, be well-read, be a skilled draughtsman, and to have great personal courage and integrity.1 At the age of 24, he was selected to be the superintendent of the Edinburgh Fire Engine Establishment. He was to head up the first municipal fire department in the world at a position equivalent to chief of department. 3

As superintendent, Braidwood recruited from the ranks of the skilled tradesmen that he worked alongside in the surveying trade. He hired carpenters, plumbers, and masons, ages 18 to 25, to work for the department on a part-time basis. Because they kept their full-time careers, Braidwood’s firefighters would drill every Wednesday at four in the morning.1

The Impact of Ventilation at Structural Fires: Breaking Down the Fire Triangle

Breathing Protection Dates Back To Romans

After two months on the job as superintendent, disaster struck. On the night of November 15th, 1824, fire started on the second story of a seven-story printing shop. The high fuel load of the shop led to a quick spread of the fire. In short order, the entire building was involved and fire was spreading. Braidwood’s municipal brigade was joined by engine companies from insurance companies as well as military units. Despite the manpower, the firefighters struggled to control the fire. Water supply issues plagued them early in the operations and the first units on scene were delayed in getting water onto the fire. Lack of discipline and organization reigned. Due to the large number of organizations responding and the general lack of training, there was not an organized chain of command.2 The fire would last four days. It would be contained and then reignite three different times over those four days. The Great Fire of Edinburgh, as the fire came to be known, caused the most destruction that the city had seen in over a century. It killed thirteen people, including two firefighters. The fire destroyed many historical structures, including the Tron Kirk Church’s steeple. It caused over 200,000 pounds of damage—tens of millions in today’s money.3

The Great Fire of Edinburgh impressed the importance of quality fire protection upon both the local government and the insurance industry. Braidwood secured funding from both the government and insurance agencies to improve his brigade. He was able to be more selective with new recruits. He continued to train his men, and he stressed the importance of aggressive operations and a quick response. He taught that the first few minutes of the fire were the most critical time of the incident. He developed strict discipline and a strong esprit de corps within his ranks. He would not ask his men to do anything that he would not do himself. At one fire, he insisted on entering the building alone to retrieve two casks of gunpowder, as he felt that the task was too dangerous to assign to any of his firefighters. He entered the burning building twice to search for and remove each cask of gunpowder.1

Braidwood developed innovations in his force that are still used in the modern fire service to this day. He was one of the first fire chiefs to advocate for fire prevention as an enhancement to fire department operations. He pursued improvement of the fire escapes in Edinburgh. He was a promoter of using technology to make firefighting efforts more effective: when he purchased new engines, he was careful to ensure excellent design. He implemented groundbreaking multi-agency interoperability. He worked with the police to train officers to sound alarms as early as possible and to assist firefighters on the fireground. He was early to implement firefighter safety techniques. The Edinburgh Fire-engine Establishment was much more aggressive than other fire departments of its time, but it suffered few fatalities. This was largely because of Braidwood’s policy that his men enter the fire in groups of at least two so that if a man fell to the heat, another would be there to rescue him.1 This tactic of never fighting fire alone is still widely used today.

The accomplishments of the Edinburgh Fire Engine Establishment earned them fame throughout the United Kingdom and the world. Meanwhile, Braidwood continued to make advances. He designed a chain-ladder fire escape, which was used in Edinburgh to great success. In 1829, he sent his design to the London Society of Arts. They awarded him the Society’s Silver Medal for his design. In 1830, at 30 years old, he published the first English-language firefighting training manual: On the Construction of Fire Engines and Apparatus, the Training of Firemen, and the Method of Proceeding in Cases of Fire.  Braidwood began to be seen as the authority on firefighting tactics. Government delegations visited Edinburgh to consult with him. 1

In 1833, eight of the insurance companies that provided the bulk of the fire protection for London consolidated into the London Fire-engine Establishment. This organization would be incorporated into the metropolitan government in 1866 and become the London Fire Brigade. Braidwood was invited to head up this precursor organization.4  He received a warm farewell from Edinburgh: he was given a gold watch and a vote of thanks from the Fire-engine Committee and given a silver cup from his firemen.1

Braidwood brought his leadership abilities and culture of discipline that he had developed in Edinburgh with him to London. In London, he was able to stand up a full-time firefighting force. He was early to use the now common practice of recruiting military veterans for the fire service. He recruited heavily from former sailors because of their strong work ethic and their ability to follow orders. In London, he discovered the importance of ventilation and controlling flow paths. He offered hefty rewards to policemen who closed street doors to fire to prevent outside air from entering. He trained first-arriving police to help control the scene to maintain a sense of calm. 1

Braidwood continued to use technological innovations to his advantage. He outfitted the London brigade with top-of-the-line fire apparatus. He implemented military scaling ladders for multi-story access. He introduced hand-pumps at dock-yards, small pumps for his brigade so they could more easily extinguish small fires, and floating fire engines for large waterfront fires. Throughout his tenure, he continued to be an advocate for fire protection, and he regularly lobbied Parliament for fire protection measures.1

Braidwood was one of the first fire service leaders to use data and statistics to track fireground efforts. At the time it was common to keep track of the number and location of fires. Braidwood went more in depth. He created tables that tracked the causes of fires, classification of the structure, and the hour the fire broke out. He also contributed two papers to the Institution of Civil Engineers.1

James Braidwood led the London fire service for 33 years, and he led from the front. At 4 p.m. on June 22, 1861, the London Fire Engine Establishment responded to reports of a fire at Cottons Wharf on Tooley Street. The fire is thought to have been caused by spontaneous combustion of hemp. Fourteen engine companies responded to fight the blaze. The men fought the fire for hours. Braidwood went to the men working a floating engine in the front order to encourage them. As he approached his men, the wall behind him collapsed on top of him. He was crushed and killed instantly. 1

The Tooley Street Fire would spread throughout the wharfs along the Thames, and it would take two weeks to extinguish. It caused damage equivalent to hundreds of millions of pounds in today’s money. It led to the 1865 Metropolitan Fire Brigade Act, which established the London Fire Brigade as a municipal department.6 Braidwood’s death was a national tragedy. His funeral procession stretched a mile and a half long through London and Queen Victoria sent her sympathies to his wife.1

James Braidwood’s contributions to the fire service earned him international recognition. Fire departments from as far away as Boston and Sydney sent their condolences to his funeral. He pioneered many aspects of the fire service that we today take for granted: firefighter safety, fire prevention, organized training, recruiting military members, the use of data, organized chain of command, ventilation, and multi-agency coordination. His most groundbreaking contribution, though, is uniquely important to American firefighters.

James Braidwood is the father of the aggressive interior attack. The status-quo of 19th-century firefighting was to flow water from the exterior of the building. Early in his tenure as Edinburgh superintendent, Braidwood tried something different. He saw applying water from the outside of the building to be a waste of time and energy. Instead, he directed his men to work in teams of two or more to get to the seat of the fire directly.5 This tactic was key to his success in Edinburgh and London. Both firefighters and the public were quick to see how much more effective this way of fighting fire was. In 1828, the Edinburgh Mercury newspaper reported:

The fact is, the spectator sees the preparation for action made, but he sees no more. Where the strength of the men and the supply of the water used to be wasted, by being thrown against windows, walls, and roofs, the firemen now seek out the spot where the danger lies, and creeping on hands and feet into a chamber full of flame, or smoke, often at the hazard of suffocation, discover the exact seat of danger; and, by bringing water into contact with it, obtain immediate mastery over the powerful element with which they have to contend.1

Colin Gardner is a firefighter-EMT for Fern Creek Fire Department in Louisville, Kentucky. He also serves in the Air National Guard as a Firefighter. He has a bachelor of arts in Spanish from the University of Massachusetts.