On this page is illustrated the Sterling double-head or quadruplex siren fire alarm, manufactured by the Inter-State Machine Products Company, Rochester, N. Y. This alarm consists in reality of two sirens, thus multiplying its volume by two. The principal part of the instrument is the fan, or rotor. This is doublefaced, made of aluminum, and is keyed to a steel shaft, which in turn is supported by end bearings. The advantage of the fan being constructed of aluminum is that, being very light, the load on the motor is considerably reduced. Another advantage of this siren is the independent end bearings. Where the fan is mounted on the motor bearings there is always the danger of the shaft springing and getting out of true and scraping against its housing, thereby possibly wrecking the siren. This construction is rigid and cannot get out of true. The fan revolves in an iron housing having properly proportioned air ports. It is the action of the fan cutting off air from these ports that causes the peculiar siren sound. The sirens and the motor are direct connected and mounted on one base, the motor, of five horsepower, being placed between the sirens, which makes a very compact and rugged outfit. The effectiveness of the siren is in its unusual and unmistakable note. When the switch is first thrown in and the fan commences to revolve, the notes are very deep and heavy, but as the motor gains speed, the tone becomes more and more shrill, until the maximum speed is reached. The switch should then be thrown off, allowing the siren note to descend the scale The siren should be raised about fifty feet from the ground. The weight of this instrument is about 900 pounds, and at a recent test it was heard at a distance of ten miles, although the manufacturers do not make any such claim for it under all conditions. 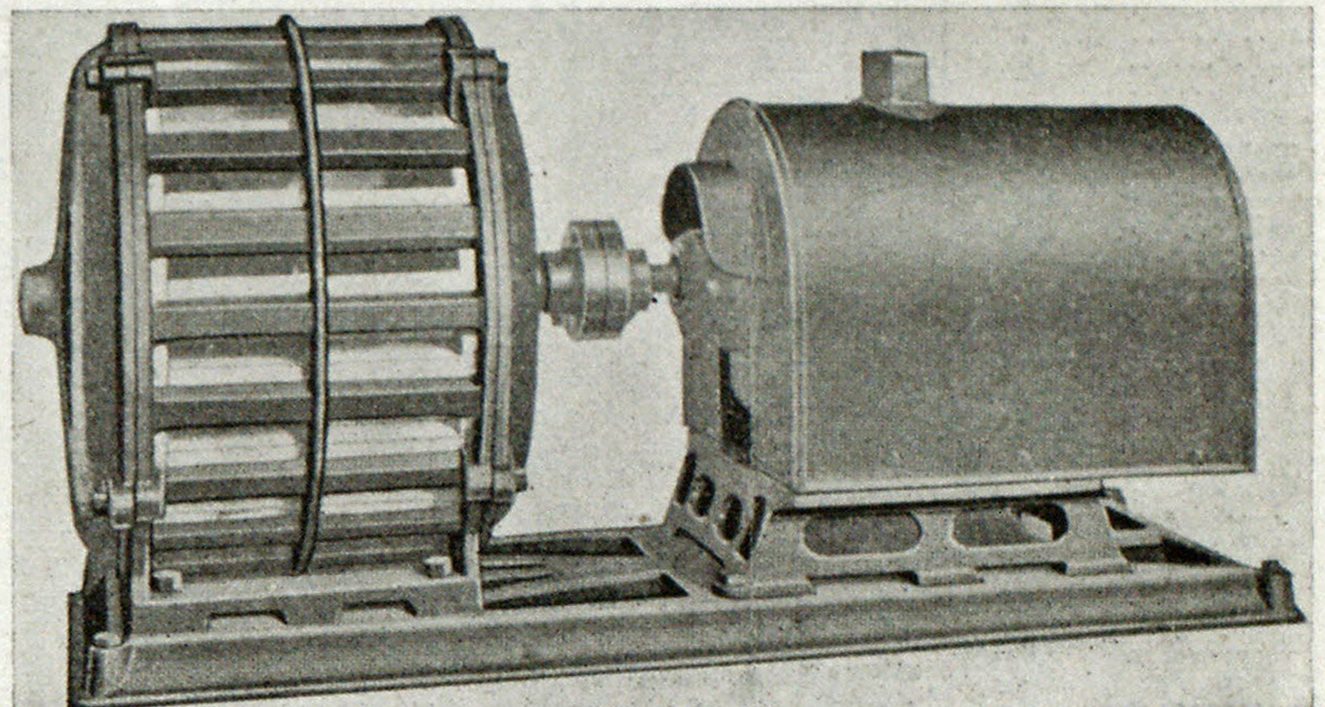 The Sterling Siren Fire Alarm, a sturdy electric siren for small cities and towns, manufactured by the Interstate Machine Products Company, Rochester, N. Y., has been developed to meet the constantly growing demand for a powerful electric signal to replace the antiquated fire bell—to serve as a substitute for the fast-disappearing steam whistle —to save the outlay necessary to install a compressed air outfit. The siren note is generally recognized as a fire signal and the note of the Sterling siren is so unusual and so distinctive as to be particularly effective. The Sterling siren is of extremely simple construction, comprising few working parts, and these of generous size and strength. The principal part of the siren is the fan or rotor. This is double faced, made of aluminum and is keyed to a steel shaft, which in turn is supported by large end bearings. The Sterling fan is made from aluminum, which lightens the load of the motor. The Sterling siren has its fan supported by independent end bearings. Where the fan is mounted on the motor shaft there is always the possibility of the shaft springing and getting out of line, allowing the fan to scrape against its housing with the phancc of wrecking the entire outfit. Sterling construction is rigid and the shaft cannot get out of line. The fan revolves in an iron housing containing properly proportioned air ports. It is the action of the fan cutting off air at these ports which produces the peculiar siren sound. The siren and motor are direct-connected and mounted on one base, which makes a very compact and rugged outfit. The fire bell served its purpose well for years, but its sound-penetrating qualities are limited, and it is far from being a distinctive signal. The steam whistle is an effective signal, but many towns have no steam plant of sufficient size to operate a fair-sized whistle. Furthermore, electrical power is gradually supplanting steam in small towns. Many places which have been dependent upon a steam whistle are now obliged to find a substitute. The principal objection, the company says, to the compressed air signal is its initial cost, and cost of operation. This system includes, besides the signal itself, an electric motor, air compressor, storage tanks and controlling mechanism to maintain proper air pressure. The effectiveness of the siren is due to its unusual and unmistakable note. When the switch is thrown in and the motor begins to revolve the fan, the first notes arc very deep and heavy, but as the motor gains speed the siren note grows higher and higher, until at maximum speed it is a shrill screech—not so shrill. however, as to lose its power of penetration. As soon as the highest note is reached the switch should be thrown off„ allowing the siren note to descend the scale. The siren should be raised about 50 feet from the ground and placed on any firm foundation. On the hose-drying tower of the fire house, in a belfry, on the cross beam of a water tower, are good places. In fact, any place is a good place provided the height is about right and the location a fairly central one. Any electrician can do the wiring in a very short time. The motor is covered with a weather-proof housing, while the siren itself is not affected by the weather. In sections having heavy snows in winter it is well to build a rough framework around the outfit and cover this frame work with cheese cloth. This will keep out snow and sleet and not interfere with the sound of the siren. The switch controlling the siren can be placed wherever desired, and more than one switch can be used. One excellent location for the switch is in the office of the local telephone exchange, where it can be operated by the telephone operator when she is notified of a fire. Other switches can be placed in different sections of the town, covered by wooden boxes. Every switch is independent of the others. By throwing the switch on and off the varying siren note is obtained, and this is most effective. The note should not be allowed to remain stationary for more than a few seconds at a time.

CHIEF TYSON ON THE BALTIMORE FIRE.