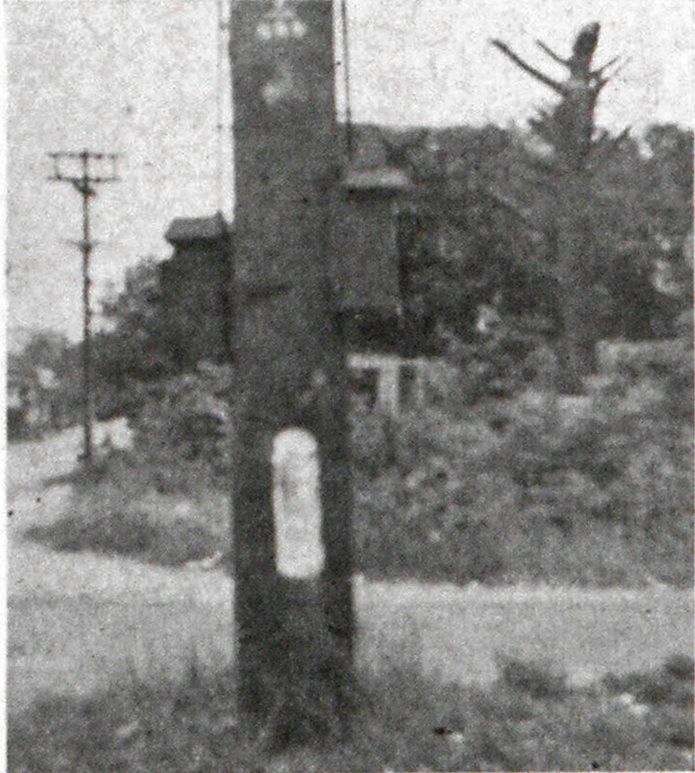 Overhauling the firemanic news of the day

Who Said It’s a Man’s World?

Mrs. Picket (who incidentally drives the fire truck), telephoned Mrs. Earl Colvin (who handles the hose—er, fire hose, that is), to sound the alarm, and by the time she got to the fire station, Mrs. Walter Johnson (she’s the “caretaker” of the pump) had the doors open.

“Mebbe they think it’s a joke,” opined Mrs. Picket, “but it isn’t. What with all the men commuting to work, there’s no one else around to fight fires until other departments can get here.”

A laddertruck, answering an alarm for a fire in a dress shop on Atlantic Ave., was passing a safety zone on that thoroughfare at the corner of North Carolina when a life net on the rig slipped from its moorings, struck a safety island standard, which in turn hit four persons standing on the island at the time.

The aonaratus, tractor-tiller type, was proceeding at normal speed when the compartment housing the net came open from some unexplained cause, and the net slipped out just as the truck was passing the safety island. The flying net and standard in turn struck two women and two men, causing leg injuries, which were treated at Atlantic City Hospital. None of the victims suffered severe hurts.

The fire? A trivial blaze that was ouickly snuffed out by fire fighters in charge of Battalion Chief Francis Wilson.

If fish can be grateful, there are several thousand very appreciative bass and bluegills in a pond near Philadelphia, Pa. Their thanks would be directed to the Huntington vol’s who hurried over to aerate the three-acre lake so the finny tribe would not die from lack of oxygen.

Passersby noticed the fishes’ plight as they drove past, and decided there wasn’t enough oxygen in the stagnant pond. They rigged up a makeshift pump, sucking water out of the pond and spraying it back in the form of manmade rain. But the pump wasn’t big enough. So they notified Fish Warden Thomas Karper, who discovered the water temperature in the pond was much too warm for bluegill or bass.

Then somebody thought of the volunteer fire fighters, and the Huntington Valley vamps brought their pumps and hose lines. Someone donated some big cakes of ice from an ice house and “all hands” went to work.

“They saved most of the fish” said Warden Karper, happily.

It was chilly the night of July 5 in New York City, but hardly a night you’d want a roaring blaze in the fireplace.

That’s what alerted a woman passing by Park ave. at 68th st. Manhattan, just before midnight. Sparks were shooting out of the chimney.

She didn’t know it, but the building is headquarters of the Russian delegation to the United Nations. She hot-footfcd it to the nearest fire station and sooner’n quick, two fire companies rolled up to the front door, and right smack into another Russian veto.

A burly and rather surly guard glared dourly out from behind the iron grill at the blazebeaters and said in reasonably good English “Go away, please!” adding (contrary to Russian rules not to explain anything, at least truthfully) something about “usinothe fireplace.”

Manhattan fire fighters observe protocol—if nothing else. So rebuffed or not, they packed back their spaghetti and headed for quarters. But around the firehouse coffee-pot—and out on the street among the rubberneckers who always collect whenever the rigs roll, there was much pondering of what was going on. Could it be, like the thrillers in the pulps, the ambassadors extraordinary, and the ministers plenipotentiary were burning their code books and secret documents on the eve of war? Thanks to the many who sent in this gramitem, including the N. Y. WorldTelegram and Sun)

Everybody in on the know says heaven help the Long Island, N. Y., Community of Port Jefferson if a real atom bomb ever comes along. A makebelieve one is bad enough.

As part of a Suffolk County civil defense drill, a 52-inch simulated bomb was set off, with these results.

Eighty house winodws were blown out, or in.

A chandelier loosened from a restauarnt ceiling dropped and injured a woman.

One man had a heart attack.

A car was damaged by flying glass..

The simulated bomb had been used without incident before. Its makers could only surmise that it gained unexpected power because Port Jefferson is in a valley and the hillside magnified the blast.

But that wasn’t all.

As dazed and dizzy C.D. workers regrouped after the explosion, they completely forgot about two low flying jets planes that roared overhead by pre-arangement. The sound further unnerved the C.D. workers and they hit the dirt in panic.

Once again they regrouped, only to scatter anew when a civil air patrol plane arrived and began dropping “emergency supplies.” Some of them nearly brained the shaken C.D. workers.

“Was all this unexpected?” C.D. Director Kenson Merrill was asked. “Completely’” he gasped!

The good folks of Little Beaver Creek, near Eikhorn City, Ky., are still talking about the shock they got not so long ago when “fiery gremlins” skipped across the power lines.

It went down in the records as “unexplained electrical disturbances” but this is a bit of what happened:

Herby Sloane’s furnace caught fire from the electrical circuit and Sloane needed hospital care for burns suffered when he tried to turn off the stoker.

Luther Salyer’s television set broke out in flames. He put ’em out, helped Sloane with his fire—then learned that his own furnace had caught fire.

A store building was ignited by the mysterious hot wires.

Fluorescent fires shot up around a utility pole ground wires.

Firemen, dashing hither and yon, were too busy to report operations.

Later, everything toned down and quiet reigned. But residents were reluctant to go near anything electrical for hours.

“Smoky” Lives Up to His Monicker

Out Los Angeles-way one “Smoky” George Bass of the Vernon Fire Department and “hot” Box 15 Club member, is a smoke-eater 24 hours a day.

During off-duty hours he takes a busman’s holiday, hustling to fires anywhere in the L.A. area with his trusty camera. He keeps a fire helmet and turnout in his car.

The night of July 7, cruising near Bell Gardens, Smoky saw flames from a grain mill fire in Paramount, over yonder. He stopped at L. A. County Eng. 39 station to get the exact location and shot off to the fire.

Arrived on the scene, he unlimbered his trusty camera but the fire fighter’s spirit in him was just too much. “I saw a man trying to hold down a big line,” he said, “and he was having trouble, so I pitched in to help.”

Smoky was doing fine until a hunk of galvanized iron fell on him and cut his finger deeply. He was taken to Rancho Los Amigos Hospital for first aid treatment, and was back on the job at the Vernon Fire Department next morning.

“He did a fine job” L.A. County Battalion Chief William Sherrill commented. “With that fire helmet on I thought he was one of our men.”

As a sort of postscript: On July 15th. Smoky and fellow fireman Jay Chapanar of the Vernon Fire Department were overcome with heat while fighting a hot one at the L.A. Steel Casting plant, 6100 S. Boyle ave. Both received treatment at the scene and returned to work. Thanks GLEN ALTON

The good citizens of Boston and Dedham, Mass., who live ferninst the border line have gotta have a discriminating eye when a fire emergency arises and they want to call fire fighters. Else they’re likely to be “all boxed up” and call the wrong outfit.

According to Contrib’ Edmund A. Burchard, who snapped the accompanying picture, the two fire alarm boxes are mounted on the same pole at the corner of Washington and Sohofield Sts., Boston, or is it Dedham? The one at the left is Dedham Box 18; the one on the right side is Boston Box No. 2995.

This ought to be another “First” for FIRE Engineering!—certainly this Column has never before heard of two separate fire alarm boxes serving two different communities on the same pole.

Of course the situation needn’t be as confusing as it may seem: no matter which box is “pulled” we reckon Mr. Citizen is gonna get quick action from some fire force, somewhere!

A “Free-Way” for Firemen on Thruway

The question, when there’s a fire on New York’s Thruway, must volunteer (or other) firemen pay tolls? Well, the answer to this’un seems to be clear. “No!”

Firemen in 24 cars and two pieces fire apparatus from Mendon and Fishers, N. Y. who answered a trooper’s alarm at 1:00 A.M. on Aug. 18, were given toll tickets at the Victor interchange and returned there after extinguishing an automobile fire.

The keeper of the gate decided to consult Thruway officials. He did. And the firemen went home free. Thruway officials on the 18th ruled that volunteers going to a blaze on the Thruway will be issued special free tickets. All tollgate keepers are being notified.

QED: What comes when firemen attempt to use the Thruway during civil defense and mutual aid tests?