On June 4 last D. A. Woodhouse was granted a patent on his Russia bolt-rope life-saving net, with springs. This excellent appliance has been thoroughly tested, and is now in use in a number of fire departments, including that of New York city. The advantage this net has over others is, that it not only has springs to relieve the weight falling into it and prevent any jar, but it may be carried on any piece of apparatus—something which cannot be done with other nets, owing to their inconvenient make. The Woodhouse net is so constructed that all ropes bring to bear on the centre from hand-hold ropes. The net is made of Russian bolt-rope. Each particular strand is interwoven and firmly sewed together at the point of crossing, insuring the maximum strength and wearing qualities. To the outer band-hold ropes are attached spiral springs to take off the strain from the men holding the net. All nets are ten feel in diameter and can be carried on any piece of fire apparatus. When rolled up, they measure seventeen by seventeen by thirty-seven inches. The Woodhouse net was tested in the training school of the New York fire department, and, after nine months hard service, ten were ordered, and are now in service. This life-net was the first Russia-bolt circular net manufactured with springs which hooked into apertures, and all other Russia-bolt life-nets are claimed by the manufacturers as infringements on the Woodhouse patent. These nets are made by the D. A. Woodhouse Manufacturing company, 59 Park place, Manhattan. New York. The company is also the Eastern agent for the Nott Fire Engine company, of Minneapolis.

Fire Marshal Peter Seery, who on January 14, 1902, was removed from his office by former Fire Commissioner Sturgis of New York city and was reinstated by the Supreme court, last January, has brought suit against the city for back pay and interest, alleged by him to be due for the two years he was out of the department. He fixes his claim and its amount on the basis of the salary of a battalion chief. $3,300 annually, instead of $3,000 annually, the pay of a fire marshal. This is done for the reason that Seery’s successor, in January, 1902. Fire Marshal Freel, was later appointed a battalion chief by Fire Commissioner Hayes, and received the salary paid in that position, atlhough continuing the duties of a fire marshal. 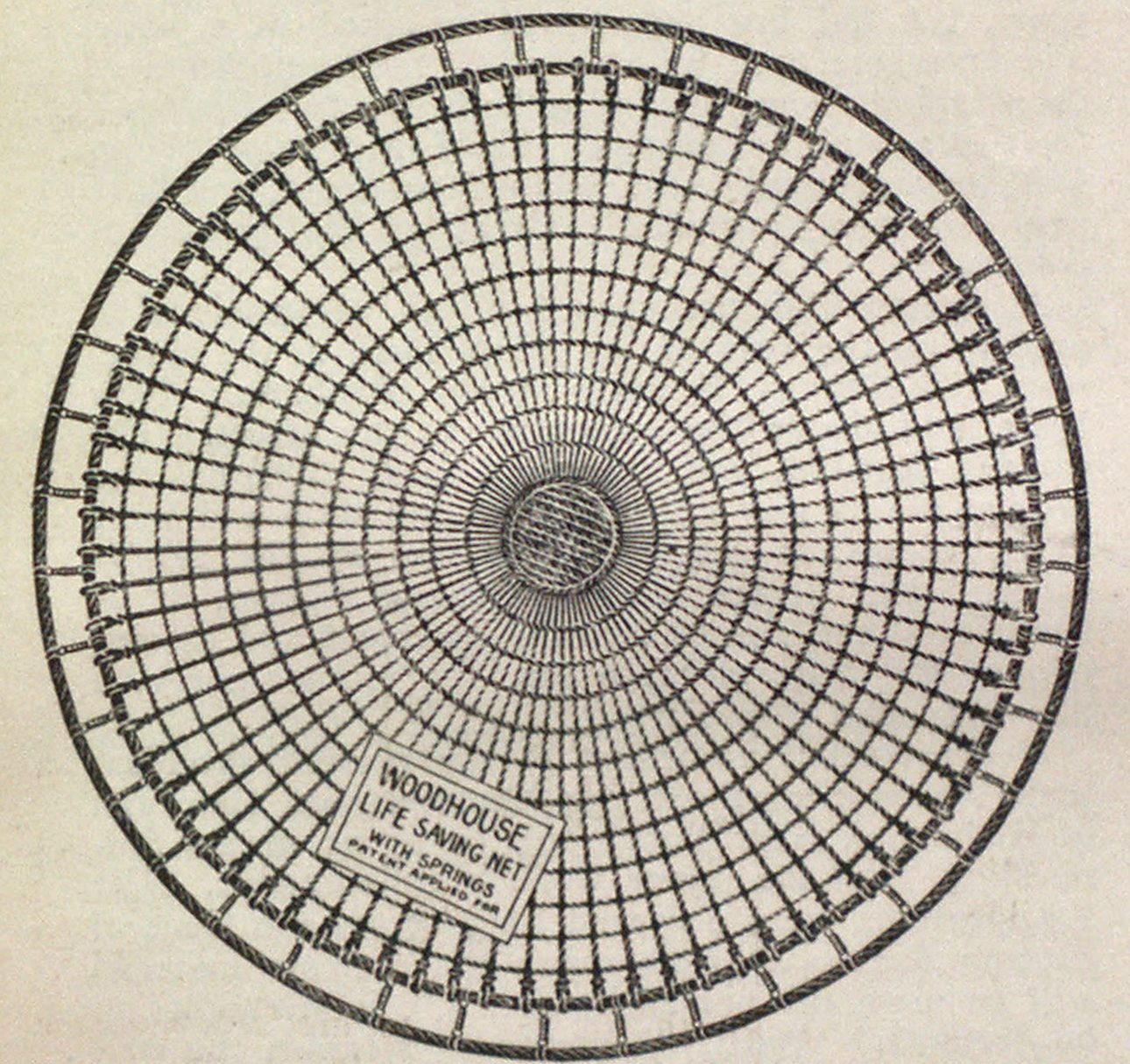 A patent has just been issued to D. A. Woodhouse for a Russia bolt life-saving net, with springs. This patent covers all circular rope life-saving nets, with coiled springs, whose ends are hooked into the apertures. The springs are attached to the outer rope or hand-holds, and to the inner main rope of the net. with clamps or other devices for attaching and holding the springs in position. The application for the patent was filed on November 18, 1901, and the patent was allowed on the 7th of this month. Thus it will be seen that a long time was taken in the issuance of this important patent for a fire appliance. The Woodhouse life-saving net is so constructed that all ropes are brought to hear on the centre from the hand-hold ropes. The net is made of Russian holt rope, each particular strand being interwoven and firmly sewn together at the point of crossing, thus insuring maximum strength and wearing qualities. To the outer end-hold ropes spiral springs are attached, so as to take off the strain from the men holding the net. The springs, also, cause less jar to be made when the falling bodies reach the net. This important point overcomes the defects which appear in other life-nets now in use. The Woodhouse nets are made ten feet in diameter, and can be carried on any piece of fire apparatus, as they can be rolled up to measure seventeen inches by seventeen inches by thirty-seven inches. The price of the new net is $100. It has been tested, accepted and placed in service in the fire departments of New York, Syracuse, Asbury Park, Sioux City, Toledo and other places. The illustration shows the construction of this new invention. It can be purchased from the Woodhouse Manufacturing company, 59-69 Park place. New York city.