At roll call, you have been assigned the can position. Your tools for the tour will consist of a six-foot hook and the two and a half gallon pressurized water extinguisher, or “the can” for short. You are a vital part of the inside team along with the officer and the irons firefighter.

It is three a.m. and as you sit in the housewatch, the computer jumps to life: the response ticket informs you of a phone alarm for a structural fire with reports of people trapped; you turn out the companies and take your assigned seat on the truck. Turning the corner of Decatur Street, the truck boss starts to rap on the plexiglas window separating the cab signaling to the firefighters in back that they are going to a ‘job.’

Upon arrival, heavy smoke is pushing from the second floor of a four-story tenement. As you approach the building, you notice the lack of a front fire escape. This means you have railroad-style apartments – apartments which run front-to-rear – and that as the can position, you are part of the inside search and rescue team. Approaching the second floor fire apartment, entry is impeded by fire extending out of the open apartment door. The truck boss calls the engine and requests a handline; there is no response; the ladder company chauffeur notifies you that the first-due engine has not yet arrived.

The truck boss decides it is time to make a move: You direct the stream of your can at the fire in the doorway and you are able to knock the fire back enough so the balance of the inside team, the irons firefighter and truck officer, can make their move. The fire is driven back into the bedroom and you use your six-foot hook to grab hold of the door and close it. As the door begins to burn away, you know that it is critical to save some of your precious, “ammo.” You notify the truck boss of the door ‘s condition and that they are working on borrowed time; no sooner do these words leave your mouth when you see the truck boss and irons firefighter dragging a lifeless body past you. The can’s remaining ammo is now used to protect your inside team’s egress. Crawling back towards the apartment’s entrance door, you notice the engine company has arrived; stretched a handline; and is waiting to get in and extinguish the fire. The victim is removed to the street due to a coordinated effort of the inside team and was feasible due to the successful operations of the can position.

Although this scenario is repeated daily throughout the fire service, the can is one of the most under-recognized tools carried on the truck. The can is a critical piece of equipment carried by the position under the same name and has proven itself capable of temporarily holding back fire and or protecting a rescue. Flashover has theoretical temperature ranges between 900°F to 1500°F. The addition of well-placed, small amounts of water into the superheated atmosphere of the fire area may not inhibit flashover, but may inhibit a component of it, rollover. This may buy the truck company some time to either close the door to confine the fire and or escape untenable areas.

The can is valuable in keeping small fires in the incipient stage. Many have responded to alarms where the truck company has knocked the fire down before the first-due handline has been put into operation. The nozzleman of the first-due engine surely does not enjoy hearing, “hey chief, we got it with the can;” although much to his chagrin, all of us are in the business of controlling fire; Period.

The can’s effectiveness in contributing to rescue is a great consequence of carrying it at every fire. The two and a half gallons of water in the can could provide you with the ability to regain control of a door, or pass fire to effect rescue of a “known life hazard;” an extreme circumstance on any fireground. The author recently had a fire in a very large multiple dwelling: several mattresses were set afire in the fourth floor hallway creating a serious life-hazard. Numerous civilians were presented themselves at the window in varying states of panic, trapped in their respective apartments. With determined inside teams from the first and second-due truck companies, the fire was knocked down as the engine company was approaching the fire floor; less than five gallons of water was required to control these threatening conditions.

On FDNY truck company apparatus, there are generally two types of cans: the pressurized water and foam cans. Many new firefighters ask, “how do I determine what can to bring with me?” The answer is relatively simple: It begins with a personal size-up from the can position and is based upon alarm information. If the response ticket relays a reported basement or cellar fire, the foam –can is the preferred option. Most basement or cellar fires involve heating equipment run by petroleum fuel such as an oil burner. The foam can is capable of extinguishing “class B” fires; if the basement or cellar fire is not fuel-related, the foam can’s water component will also be effective on any “class A” combustible. For fires in other parts of the fire building or other floors, the pressurized water extinguisher is the can of choice.

The can does have a couple of drawbacks: its weight and quantity of water. The can is considered by some to be an awkward and heavy tool to carry. Although this critical piece of equipment weighs around twenty pounds, compensating for its awkwardness while carrying is accomplished by utilizing seatbelts or webbing as a carrying sling. The sling allows the can position to carry the can on his shoulder and also drag it while searching. Although the can has a limited amount of water, as stated above, small amounts can extend your interior operations. It becomes the quality of how the limited amount of water is used: Several short bursts from the can have been witnessed saving the lives of civilians and fellow firefighters.

The can is an extremely useful tool for the truck company firefighter assigned the can position at the beginning of the tour. There is an old fire service quote that states, “More lives are saved by a properly positioned hoseline than by any other tool in the fire service.” That statement, while a truism in the fire service, can be paralleled with similar language regarding the can. The truck is not always afforded the luxury of operating within the purview of the engine company’s hoseline when performing the duties of an inside team. However, the can’s capabilities could mean the difference between making a positive or zero impact on the fireground. 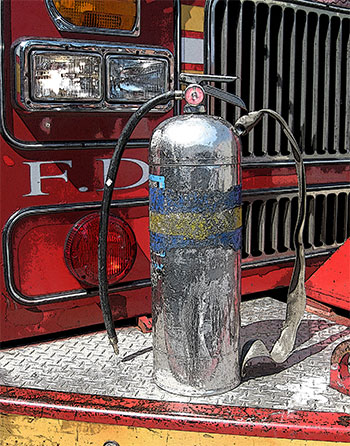