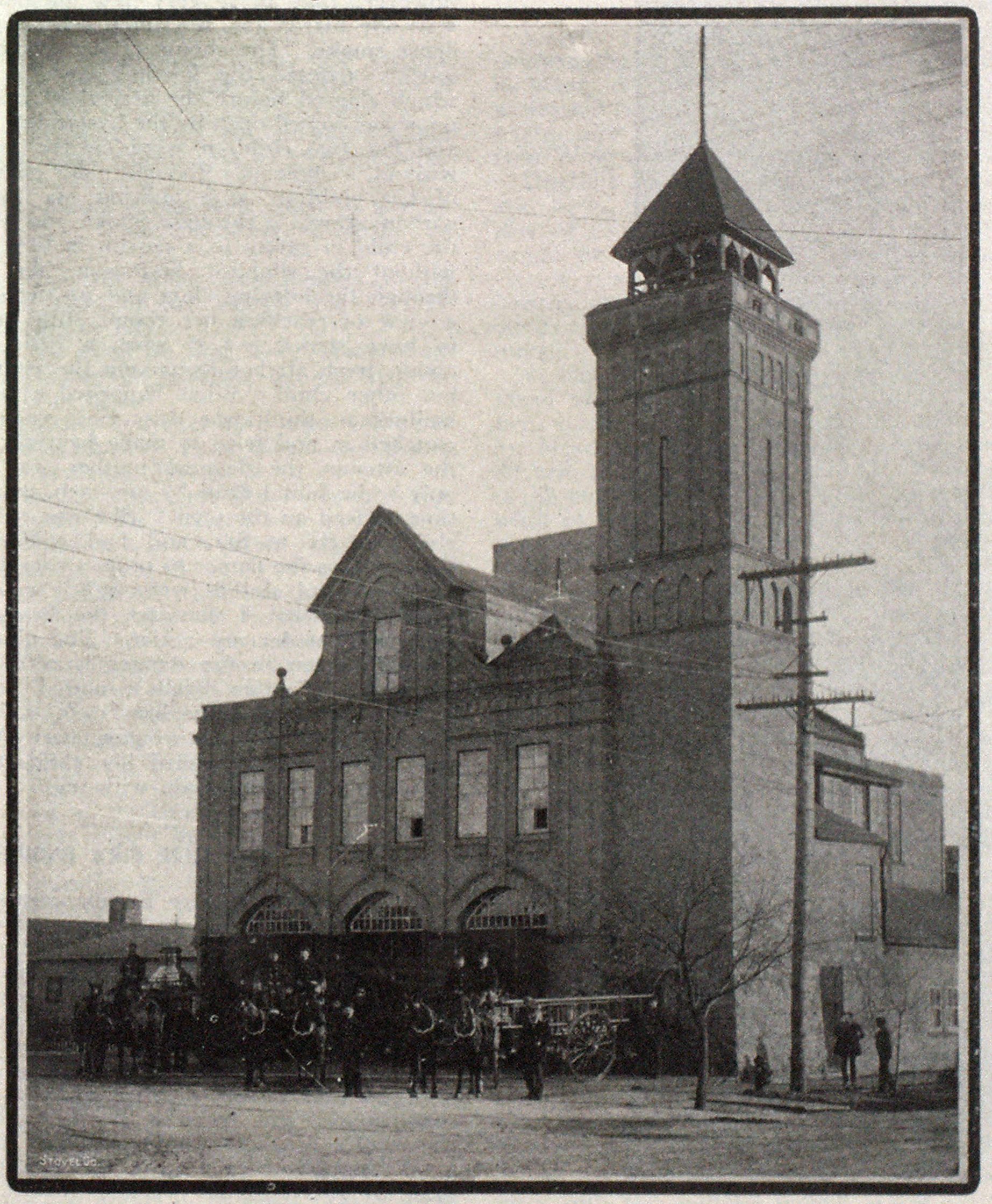 Chief Kiersted’s report for the month of June shows a total of forty-one alarms of fire—all first alarms. The total estimated loss is stated to be $15,000—an average per alarm of $360.97, and a per capita loss of about six cents.—The first half of the present year was a busy one for the men of the Newark department. During the past six months the firemen answered 407 alarms of fire of all kinds. Of the total alarms 337 were for first alarms, and ten were second alarms. In a number of cases in which a second alarm was sent out. the extra apparatus did not go into service. At no time was it necessary to send out either a third or a fourth alarm, and at no time was the entire fire department out at the same time, although in a number of cases, false alarms kept the men and apparatus on the jump. The total estimated loss is placed at $210.500—an average per call of $515.96, and a per capita loss of somewhat under seventy-seven cents.—Jersey City had a $100,000 fire the other night. It broke out in the planing, moulding, and box factories of Vandcrheok & Son which ran from 76 to 84 Steuben street and extended for 200 feet through to Morgan street. They were of brick and were totally destroyed. When the second floor, which was loaded with machinery, gave way, it caused the collapse of the front and part of one of the side walls. Ten of the firemen were carried down and received severe injuries, one having his leg broken and receiving a severe scalp wound. By hard work the adjoining buildings were saved.—John R. Wood, aged sixty-seven, one of the old volunteer firemen of Paterson, has just died at the Firemen’s Home at Boonton. His was the first death that has occurred there since the home was established. Fifteen years ago he received an injury to his spine when fighting a fire, and from its effects he never recovered. Woods, who was a native of Virginia and the son of a Waterloo veteran who lost a leg at that battle, was brought to Patersonwhen he was seven years of age. When a boy he became a runner in the volunteer fire department of that city, and when of sufficient age a member of engine company No. 5. remaining in the service until the volunteers were mustered out of the service on March 20, 1890.-The Cedar Grove reservoir for the supply of Newark will not he completed on December 1, as appointed, and an extension of time will have to be granted the contractor. The initial work of excavation proved much greater and more costly than was anticipated, in consequence of the unexpected excess of rock. The city has already paid to Stewart & Abbott $329,700 out of the $581,287 —the contract price—and it is believed the work on the reservoir is less than one-half completed. There arc two short dams, one at the northern end and the other at the southern end, which are nearly completed, but the west dam. which is over half a mile long, is very backward. The work on this dam is very heavy and it will require a long time to complete it. In the building of the cove it was necessary to go to a depth of sixty-seven feet for a rock foundation. The work on the reservoir will certainly cost at least $300,000 more—that figure will probably be exceeded.—Paterson is being thorough)}’ investigated by insurance men, especially as regards its electrical installations. In many cases the wiring is poor, and where that is all right, so far as concerns carrying power, naked wires and poorly placed sockets and rosettes menace the safety of buildings. The inspectors declare that many of the cellars in the center of the city court a conflagration. They have, therefore, issued warnings, and have told the occupants that all cellars that they class as dangerous must be cleaned at once and kept clean, or insurance policies will be canceled. I he board of fire underwriters feel that the time has arrived for the appointment of a wire inspector in Paterson.—The Orange Water company, of East Orange, which has been supplying Glen Ridge with water, will soon have to compete with the recently incorporated Little Falls Water company, which is generally supposed to have been organised by the Fast Jersey Water company in Glen Ridge. Its capital is $60,000. and bonds will soon be placed on the market. T he new company will set eighty hydrants on seven miles of mains, four miles of four-inch, a mile and a half of six-inch, and a mile and a half of eightinch pipe. Under the franchise which the corporation expects to obtain from the township, the price per hydrant will be $30 per year, if less than fifty, are used, and, if a larger number are wanted, the price will be $25. The water, according to the prospectus. D to be supplied by the East Jersey Water company for twenty years and the rate to be charged is $30 per million gallons for the first two years, and $100 for the same quantity for the following eighteen years.