The celebration of the arrival of a new piece of apparatus has been a source of pride for volunteer fire companies for more than 100 years. The volunteers of the 18th and 19th centuries spared no expense in outfitting and decorating their new “engins” (a popular term in the 19th century). For decades, 19th-century volunteers in our largest cities retained the services of some of the most famous artists of the period including John Woodside, Thomas Sully, and Joseph Johnson, who rendered incredible pieces of art on the rigs, composed of patriotic, mythological, and historical scenes. Many of these companies held soirees and other social events to mark the occasion of the new piece of equipment.

Norman Rockwell’s 1971 illustration “The New American LaFrance Is Here!” captured the moment of a new engine’s arrival. Showing his hometown Victorian firehouse in Stockbridge, Massachusetts, Rockwell conveyed the excitement in the town, showing children-and even adults-rushing to see the modern fire engine. Next to it is the retired 1920s-era pumper.

The evolution of the “event” to commemorate a new truck is not clear. Certainly, parties and soirees were held in its honor. In the era of hand pumpers, a new engine attracted the attention of rival engine companies by attempting to “wash” the new engine. The rival engine would pump at a rate faster than the new engine, causing water to fill the reservoir at the rear of the new engine and flood over the engine’s sides. It is perhaps this “washing” from which the “wetdown” has evolved. Of course, since these engines were hand-drawn, pushing the engine into quarters was a daily occurrence.

In any case, we use the wetdown and push-in today to announce to the community that it has a new source of pride.

Prevalent in the Northeast, wetdowns are characterized by a dedication ceremony; refreshments; and, of course, water. In the past, the water component was much more “aggressive,” often in the form of a friendly deck pipe blast from a visiting engine. Today, such activities have typically been replaced with a handline fog steam.

A recent wetdown in Red Bank, New Jersey, provides a modern illustration. On May 18, 2014, the 142-year-old Navesink Hook and Ladder Company (NHLC) dedicated its new combination rescue/ladder truck, replacing a 25-year-old ladder truck. It was a festive event, encompassing the entire street in front of the firehouse. The entire community was encouraged to attend, and a variety of activities and refreshments were provided (photos 1, 2).

In addition to free buffet-style varieties of foods and soft drinks, the traditional drink-beer-was offered as well. Those consuming beer were age-verified and given wristbands to wear. Another staple of a wetdown, a commemorative mug, was offered for sale. A band, the Jukebox Criminals, provided live entertainment and attracted lots of attention. Special T-shirts were offered for sale, and a new leather helmet was raffled off.

Of particular note was the attention given to showing off the new rig’s capabilities. Every compartment door was opened, encouraging attendees to take a closer look; several firefighters, in uniform, answered questions from the public.

What made this event particularly special was the appearance of the NHLC’s original 1919 motorized ladder truck, which is now owned by the Hightstown (NJ) Fire Department. It was brought to the wetdown in a trailer and driven down the street near its former firehouse. It attracted lots of attention, especially from photographers, who took photos of happy, helmet-wearing children in the front seat (photo 3). 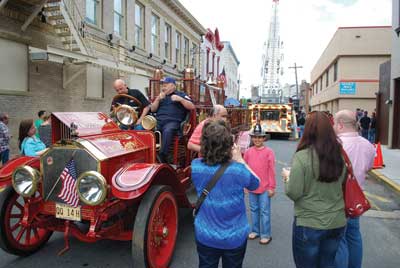 Three months later, nearly 1,400 miles away, firefighters for the Limestone (OK) Fire Protection District put in service a new 2,000-gallon tanker. The ceremony took place on August 9, 2014, and featured an equally impressive traditional event. All firefighters participated in a push-in of the new truck to the cheers of all attending.

Taking place on a blazing hot Saturday afternoon, the nearly 75 attendees inspected the new rig and took many photos. The local television station conducted interviews in advance of the main event. The ceremony included dedication speeches, a blessing, and a ceremonial wetdown from a small handline. Once the truck was dried off, all firefighters participated in the signature event: the push-in to the firehouse. Finally, an “availability for service” radio transmission was made to conclude the dedication. All attendees were then invited inside the firehouse for a buffet-style luncheon (photos 4, 5). 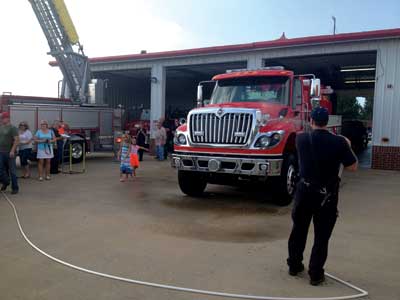 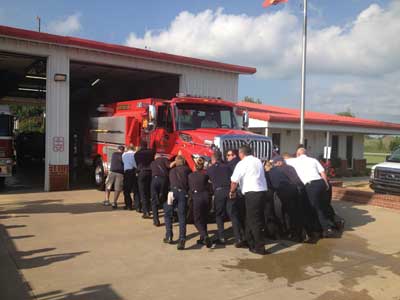 Planning your own wetdown or push-in takes time. Start at least one year in advance, forming a special committee to develop, plan, and address all needs and details. Have younger and older firefighters on the committee to get different perspectives and skill sets. Meet at least once a month in the beginning of your preparation, increasing the meetings to once a week as the date approaches. Establish a budget.

The committee will have many things to consider. Following is a list of the major issues that you will need to address:

The dedication of a new piece of apparatus offers a fire company or department the opportunity to show off its pride and esprit de corps. It also allows firefighters to connect directly with the public, the people, and the businesses that have provided the financial support for the purchase of the truck. Ultimately, such festive events increase the bonding among firefighters.

GLENN P. CORBETT, PE, is the former assistant chief of the Waldwick (NJ) Fire Department, an associate professor of fire science at John Jay College of Criminal Justice in New York City, and a technical editor for Fire Engineering. He served on the Federal Advisory Committee of the National Construction Safety Team and is a member of the Fire Code Advisory Council for New Jersey. He is the coauthor of the late Francis L. Brannigan’s Building Construction for the Fire Service, 5th Edition; editor of Fire Engineering’s Handbook for Firefighter I and II; and an FDIC executive advisory board member.