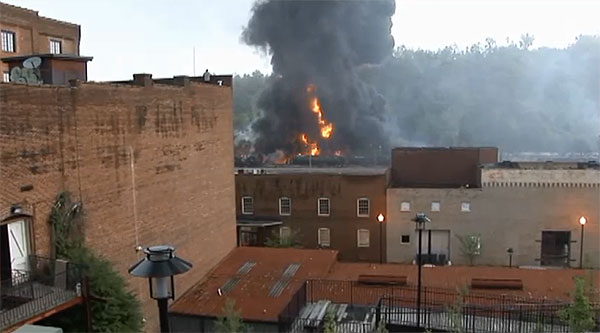 Lynchburg (VA) Battalion Chief Robert Lipscomb took the time to present “Lessons Learned from a Bakken Crude Oil Train Derailment”, a webcast that detailed the challenges his department face when an oil train derailed in his city (WATCH HERE). Below are some of his answers to questions posed by presentation viewers.

Q. Was the train carrying crude oil or bitumen?

Q. What were the initial actions on arrival?

A. Evacuation of areas adjacent to the derailment, establishment of incident command, hazard identification, and notification of railroads.

Q. What issues did you have with evacuations?

A. The train stopped in a position that blocked a major thoroughfare in two locations.

Q. Did your department use mutual aid?

A. Yes. The Lynchburg Fire Department utilized mutual aid with the surrounding counties to provide fire response coverage to the city.

Q. Did you use mutual aid to help fill other responses in your first-due, and did that work out as expected?

A. Yes, we did. Our mutual aid agreements provide for coverage of additional calls for service by neighboring volunteer fire departments. It worked as expected.

Q. How did you rotate the crews during the three days? I would suspect initial apparatus was released fairly quickly once the fire was out.

A. Following the initial phases of the incident, units were rotated every four hours.

Q. Were you given full control, where everyone reported to you as the incident commander?

A. As the incident commander during the first two operational periods, I was given full control of the incident. Outside of the Unified Command structure with law enforcement used for evacuations and crowd control, the Lynchburg Fire Department remained the lead agency for the duration of the incident.

Q. Prior to this incident, how much preplanning went into this type of response? And did that preplanning help this incident along efficiently and as planned? Or did your plan need to be adapted?

A. No specific preplanning was done for this type of incident.

Q. Had the train derailed away from the river, would you have considered an attempt to extinguish the fire?

A. If the train had derailed away from the river, there would have been a significant impact on structures located downtown. This coupled with the associated life safety concerns would have made extinguishment a serious consideration.

Q. After the main incident was settled did fire take more back seat approach and act as support for the railroad?

A. No. The fire department had a strong presence and worked side-by-side with the railroad during the recovery phase.

Q. How did you overcome the communication issues with so many different agencies responding and on scene?

A. Most communication was done face-to-face. CSX was issued fire department radios so that command could communicate directly with their safety officers and hazmat team.

Q. Since the incident, has your agency or the dispatch center thought about the apps from CSX or Norfolk Southern to obtain train car information using the railcar ID number from any other railcar not derailed?

A. Yes. Our department command staff has access to the Rail Respond program offered by CSX.

Q. Did you use social media to notify citizens of the incident?

A. Citizen notifications were done by the PIO at the EOC.

Q. How long did the fire burn?

Q. How quickly did you make the decision to evacuate and what resources did you use to do so?

A. Self-evacuations began immediately in the area directly impacted by the derailment. Outlying areas were evacuated by the Lynchburg Police Department.

Q. Did you use the Coast Guard?

A. No. Lynchburg is too far inland to be accessed by the Coast Guard

Q. How restricted is information about dangerous materials–the 1267 designation, the consists, the MSDSs, etc.? I’m thinking of the Canadian threat to passenger trains by terrorists that was discovered in time.

A. Material related to the 1267 designation and safety data sheets should be readily available. Consists on the other hand are documents related to a specific train and therefore are usually not available to the general public as they list specific information about a train that may be considered proprietary.

Q. Did you have a gathering point for the media?

A. Yes. Media was staged in a parking area directly across the river from the derailment.

Q. How was interaction with CSX?

A. The CSX representatives that responded to the scene were very helpful and respectful of the command structure in place.

Q. Did Richmond experience any contamination with their water supply?

A. No. There was no downstream contamination of drinking water

Q. Did you do credentials for all on scene?

Q. How was product sopped from moving down stream as it burned?

A. Harbor booms were placed down river by hazmat crews and cleanup contractors.

ROBERT LIPSCOMB is Battalion 1 chief on B-Shift for the Lynchburg (VA) Fire Department (LFD), where he has served since July 1990. He has a BA degree in childhood education from Lynchburg College. During his tenure with the LFD, he has served as a firefighter/paramedic in field operations; public education captain; engine company captain; and, most recently, training chief. He is certified as a Virginia Office of EMS EMT-paramedic, Virginia Department of Fire Programs instructor III, and fire officer IV. He has attended numerous classes at the National Fire Academy and Emergency Management Institute and training programs sponsored by fire service agencies and organizations.