Often, things that are out of sight are also out of mind, and the ramifications from their failures are not contemplated beforehand or realized until after an emergency occurs. One example of this is underground pipelines, or more specifically, the transmission of gas and refined liquids. I could impress on you by reiterating industry statistics on the extraordinary miles of pipeline, the exponential amount of product transported daily, and the safety record touted by pipeline companies. However, that means nothing when you are faced with an expanding gas plume, a meandering below-grade gas leak, or an intensive heat radius igniting and consuming buildings and people.

Many catastrophic pipeline incidents have occurred in the United States that should be cause for study on enhanced local preparedness. In June 1999, a gasoline pipeline accident occurred near Bellingham, Washington, killing three civilians. More than 277,000 gallons of gasoline spilled into a nearby creek, and the fire burned for five days. In September 2010, a 30-inch natural gas line exploded in San Bruno, California, killing eight people. And in February 2014, another 30-inch natural gas line exploded, destroying numerous homes and igniting many other structures, and killing one person. The cause of these incidents varied from relief system malfunctions, corrosion, and pin-hole sized leaks.

My area has seen its share of pipeline incidents as well. From residential distribution line leaks to releases from transmission lines [See my article “Pipeline Rupture: A Case Study,” Fire Engineering, April 2001], the causes of most of these incidents were human error. Fire departments that protect communities with gas service have likely responded to leaks. And, the great majority of those incidents rarely resulted into a catastrophic event. Some departments respond frequently to “smells” of gas, and when the investigation finds no hazard, staff can become more complacent to the next response. The times you let your guard down is when a significant incident will occur.

Pipelines typically fall into one of the following three categories:

Each type can vary in size and pressure, so consult with pipeline companies that traverse your area for specific data.

Regardless of the types of pipelines in your jurisdiction, it is necessary to improve preincident intelligence on each. Remember Murphy’s Law: whatever can go wrong will go wrong. Similarly, the aspect for which you are not prepared will likely occur. Each type of pipeline requires careful consideration regarding its size, product, and pressure. This article will focus on transmission pipelines.

Several of the transmission pipelines that dissect my county feature an array of sizes, products, and pressures. One pipeline transports liquid propane and two others transport refined products such as gasoline, diesel fuel, and kerosene. Five other high-pressure natural gas transmission line right of ways (ROW) dissect my county through several highly populated areas.

In addition, the infrastructure is growing. A new 10-mile length of 20-inch diameter high-pressure natural gas line project is in progress that will connect laterally an existing ROW to an out-of-state compressor station. Also being proposed is a 42-inch diameter high-pressure natural gas pipeline that will connect to a current ROW corridor several counties north and travel 35 miles through Lancaster County and tie in to an existing lateral in the southern end of the county. This project is meeting a lot of public resistance because of the environmentally sensitive areas it may travel through. Regardless of one’s personal views, emergency service personnel must be prepared for a response to project’s such as these.

You can identify the locations of pipelines by markers that cross under a roadway, railroad, or waterway. Markers should include the operator, emergency contact number and the general product transported (photo 1). Some markers will present larger number(s) that may be angled (photo 2). This represents the mile marker that pipeline companies reference when conducting aerial patrols over their ROW to locate leaks or infringements. 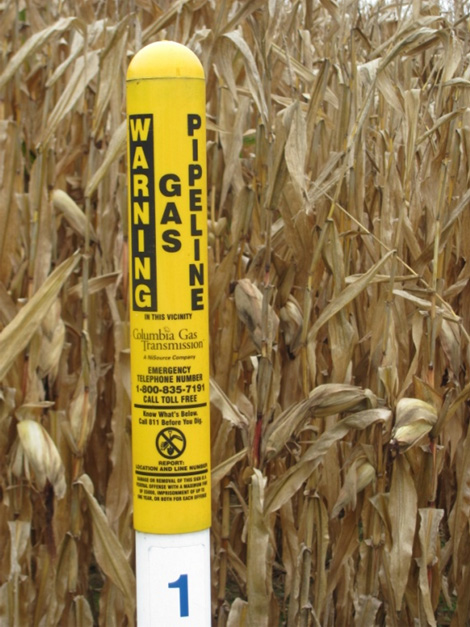 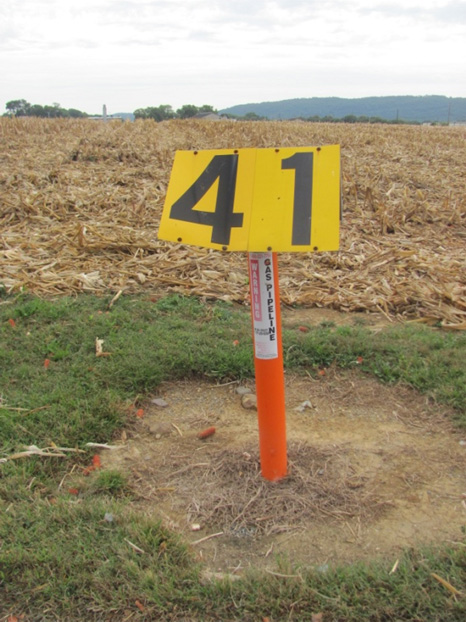 Another source that may help you locate the general location of transmission pipelines is the National Pipeline Mapping System (NPMS). Accessing the link https://www.npms.phmsa.dot.gov provides a public viewing application as well as the ability of governmental entities (i.e., fire departments) to apply for access to additional information.

The NPMS database may not contain certain information important for emergency planning such as pipeline size and maximum operating pressure (MOP). This database should not be a standalone preparedness medium. It is essential to establish a rapport with pipeline representatives for pre-emergency coordination and to obtain other specific information. The database may not include important characteristics such as if the product (i.e., natural gas) is odorized. Another query to pipeline officials is citing the location of aboveground structures (AGSs).

In transmission pipeline operations, you may host a variety of AGSs. Besides the aerial markers mentioned above, other AGSs may include compressor stations (photo 3), metering and regulating stations (photo 4), and valve sites (photo 5). 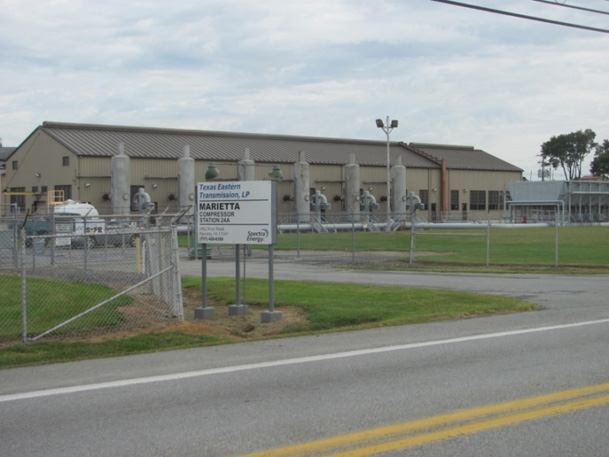 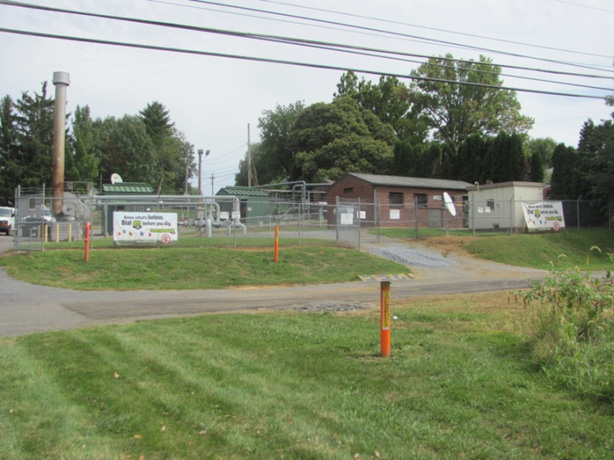 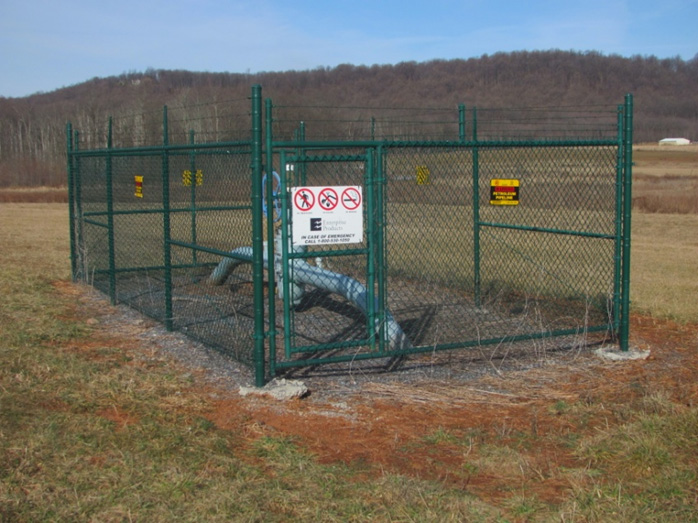 Although it is important to note the location of AGSs, an overarching rule of thumb is to never manipulate pipeline valves. Some transmission pipelines will interface with a local distribution company at a joint AGS, generally called a “city gate.” Natural gas transmission pipelines may not be odorized, and the product may not be until it is processed through a city gate (photos 6, 7). 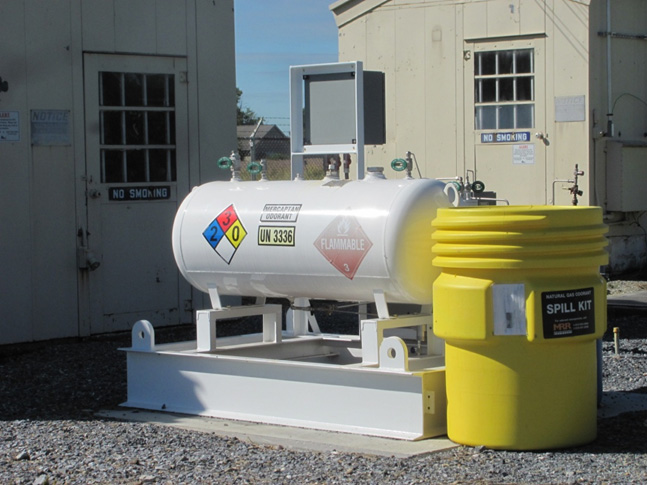 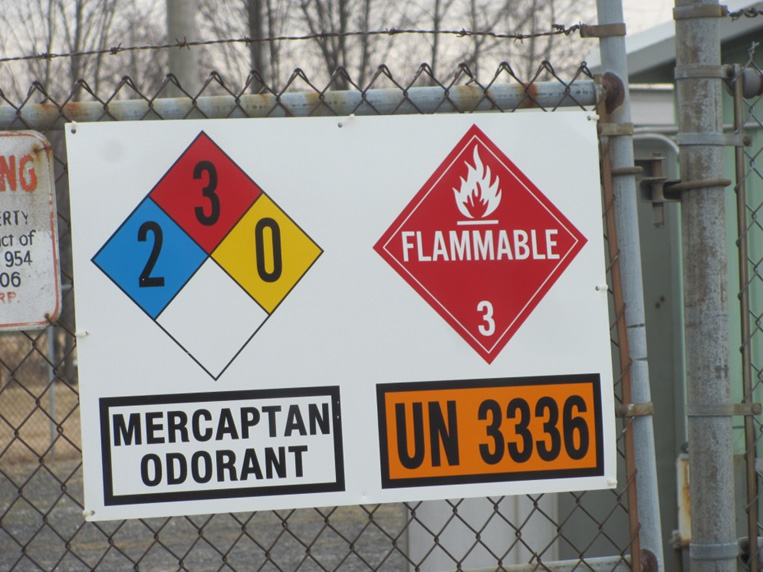 (6, 7) Mercaptan odorant tank and sign at a location where the distribution company and transmission line interface at a city gate.

Pipeline markers will indicate the general product being transported—such as a petroleum product—or gas pipeline. But it is imperative to ascertain the specific product(s) being transported to realize its physical and chemical properties, characteristics, and postrelease hazards. It is also important to note that transmission petroleum pipelines shipments of refined products may vary. Referring back to my April 2001 article, at the time that line was punctured, it was transporting diesel fuel. Later in the day, it was scheduled to transport gasoline.

Most response guidance sources pertaining to transmission pipeline emergencies include general considerations. “Approach the pipelines up- or cross-wind,” “Isolate and deny entry,” “Do not operate valves,” “Do not extinguish (fuel) fires,” and “Eliminate ignition sources” are common statements. “Protective action distances” are generalized as well. For example, in the 2012 edition of The Emergency Response Guidebook (ERG), the guide for natural gas is Guide 115. Under the evacuation guidance for a large spill, which is a subjective perception, the initial downwind distance suggestion is one-half mile. Some fire departments have specific standard operating procedures for handling gas leak reports regarding directions on staging apparatus, water supply, and air monitoring. However, to be better prepared, it is important to research other resources.

For a petroleum liquid pipeline rupture, Guide 128 of the 2012 edition prescribes an evacuation distance for a large spill of up to 1,000 feet. Not to discount the ERG, but another source provided by a local petroleum pipeline company suggests a (PIR) of 100 feet per inch in diameter of the line. PIR is a pipeline industry reference equivalent to what emergency services call an “evacuation radius.” The 100 feet per inch diameter formula only applies to petroleum pipelines. One of the drawbacks of this rule of thumb is that it does not regard pressure. So, for an eight-inch diameter transmission petroleum, regardless of the pressure, the PIR is 800 feet.

For natural gas transmission pipelines, PIR guidance is more detailed. The Pipeline Association for Public Awareness (PAPA) maintains a Web site for emergency services, the public, and contractors with state-specific resources and other preparedness information. You can download a 43-page guidance document at http://www.pipelineawareness.org/wp-content/uploads/2015/06/2015-Pipeline-Emergency-Response-Guidelines.pdf.

In that document, as well as in the one-page “Recommended Minimum Evacuation Distances” matrix found at http://www.pipelineawareness.org/wp-content/uploads/2010/06/Evacuation-Distances-for-Natural-Gas.pdf  is a minimum evacuation distance guideline that correlates pipeline diameter size to the operating pressure. This matrix only applies to natural gas incidents. Comparatively, the ERG does not distinguish size and pressures. The general ERG distance for a “large spill” of natural gas is one-half mile (2,640 feet).

Whether you reference the rule of thumb for petroleum pipelines, the PAPA evacuation distance for natural gas, or the ERG (for either product type), each provides a preparedness baseline for identifying the PIR and the populations, facilities, and infrastructure that potentially could be affected. The proposed 42-inch diameter natural gas pipeline mentioned earlier will operate at a MOP of 1,480 pounds per square inch. The ERG evacuation distance is 2,640 feet regardless of size and pressure. Using the PAPA matrix, the minimum evacuation distance is 3,709 feet. To prepare for the latter distance, geographical information system staff is preparing PIR radius maps along the proposed corridor and identifying potentially affected residents, facilities, and infrastructure. Additionally, local emergency services can develop specific preplans for that scenario.

The intricacies of pipelines are many, and this article provided only general considerations for improving your preparedness for a transmission pipeline incident. Even if you do not protect a transmission pipeline, it is important to identify all structures—above- and below-grade—that may be host to an emergency and prepare accordingly. It is very important is to establish preincident rapport with your pipeline company representatives and get them involved in local preparedness efforts.

ERIC G. BACHMAN, CFPS, is a 33-year veteran of the fire service and a former chief of the Eden Volunteer Fire/Rescue Department in Lancaster County, Pennsylvania. He is the hazardous materials administrator for the County of Lancaster Emergency Management Agency and serves on the Local Emergency Planning Committee of Lancaster County. He is registered with the National Board on Fire Service Professional Qualifications as a fire officer IV, fire instructor III, hazardous materials technician, and hazardous materials incident commander. He has an associate degree in fire science and earned professional certification in emergency management through the state of Pennsylvania. He is also a volunteer firefighter with the West Hempfield (PA) Fire & Rescue Company.